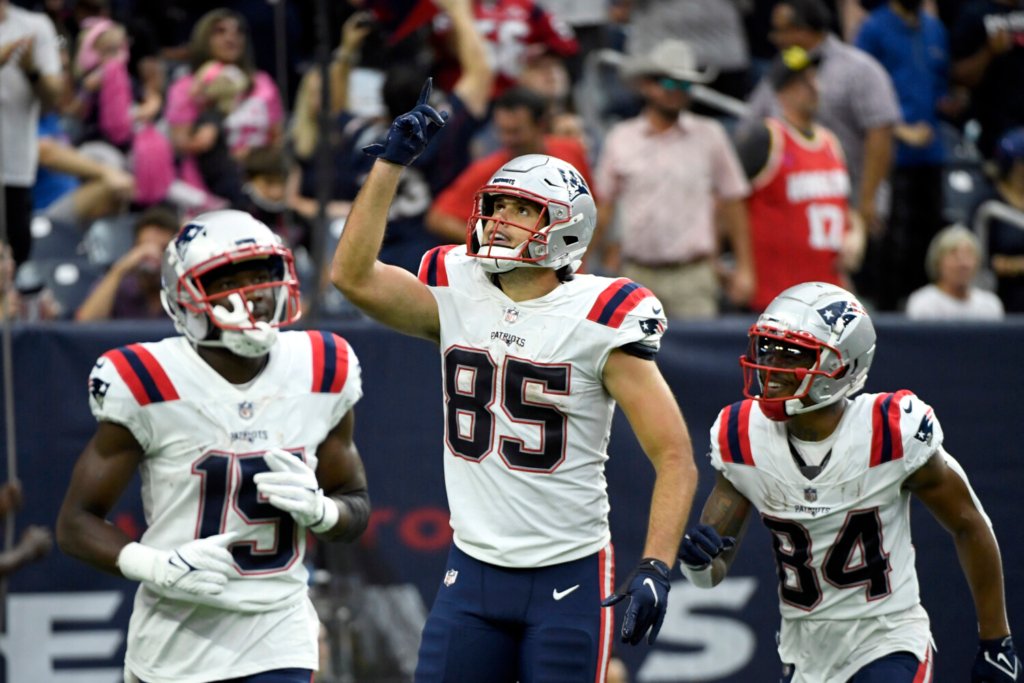 Mac Jones continued to show is toughness behind a patchwork offensive line who did its job admirably on Sunday and Nick Folk buried a 21-yard field goal with 15 seconds left to give New England a 25-22 win. The defense continued to struggle as Texans rookie quarterback Davis Mills threw for 312 yards and three touchdowns, but in the end it was Jones leading his first career game-winning drive and possibly saving the Patriots season.

“It felt really good,” Jones said of his first comeback win. “I think the offensive line did a great job and I think it all starts with them. They were doubted all week and there was this and that, and all the noise around that and they came out and they played really hard and they played together.

“I think I only got hit one time the whole game. So just shoutout to those guys and they are a big reason why it happened, and it was just – we just out-competed. I don’t know if we out-played the other team but we definitely out-competed and that’s all we can ask ourselves to do.”

Stunningly, the Patriots trailed 22-9 early in the third quarter after a Chris Conley 37-yard touchdown catch. The Pats defense forced a Texans punt on the next possession and if you remember the Colts’ idiotic fake punt set up from the Sunday night game a few years ago, the Texans tried to pull that off, but only in dumber fashion, punting the ball directly into the head of a lineman, giving New England possession at the Texans’ 36. The offense gained just three yards in four plays, but Nick Folk booted a 52-yard field goal, cutting it to 22-12. Another 32-yard field goal from the veteran late in the third made it 22-5 heading to the fourth.

Seven plays and 54-yards after a missed Houston field goal – an odd 56-yard decision on 4th-and-four from the Patriots’ 38-yard line – Jones hit Hunter Henry (6 catches, 75 yards) for a 13-yard TD and things were suddenly tied at 22-22 with 9:31 remaining. A Texans’ three-and-out followed and Jones began his game-winning march at the New England 13.

Jones (22-of-30, 231 yards, 1 TD, 1 INT) methodically led the team downfield in 15 plays spanning 7:00 and the drive ended with Folk nailing the game-winning kick. On the final three scoring drives for the Patriots, Jones was 11-of-12, a model of consistency under pressure.

“I mean, Mac gave it to us all day,” said Bill Belichick of Mac’s leadership, which included a bloody jersey late in the game after taking a shot under the chin. “I thought we moved the ball. I thought he made a lot of good decisions. There were some checks that he had to make that he made throughout the day, but really the last drive was a third down conversion to Hunter and then we had a couple good runs in there. But yeah, Mac’s been good for us all year in terms of his leadership, his resilience, and kind of always counting on him to do the right thing, and you know, he really does it at a high level, so it’s been impressive.”

It was truly a nightmare start for the Patriots defensively and there are still some huge concerns in the secondary as well as the lack of a pass rush, aside from Matthew Judon who is now second the league with 6.5 sacks after another one on Sunday. Houston waltzed down the field to open the game, using 18 plays to chew up the first 10:06 of game clock. An 11-yard TD reception for Anthony Auclair and a missed extra point made it 6-0. The Pats answered with a 10-play drive and Damien Harris capped it with a 1-yard touchdown run but Folk missed the PAT.

The Texans only needed three plays to answer. Mills hit Chris Moore for a 67-yard touchdown when Devin McCourty was out-jumped for a ball and then Moore was off to the races. Ka’imi Fairbarin missed the extra point again on what was a horrific day for kickers around the NFL leaving the score at 12-6. New England marched down field again and seemingly tied the game on another Harris touchdown, but the ball was punched out at the goal line and deemed a touchback after he fumbled it into the end zone. The Texans chewed up another seven minutes on a 15-play drive but had to settle for another field goal after a goal-to-go stand for the defense. The Patriots got a 52-yard field goal from Folk to end the half and somehow remain in the game at 15-9.

“Defensively, we didn’t have a very good first half but made a big stop there at the end of the half, so those ended up being important points,” said Belichick. “I thought the blocked punt was a key play in the game for us, even though we only got a field goal out of it, which ended up being a three-point game. I thought that was a big momentum play and thought our kicking and special teams played well. (Andre) Roberts is a tough guy, and I thought we covered well on him both on punts and kickoffs, especially kickoffs. They are good in the kicking game. They covered well against us, too. But the blocked punt really was a big play and of course Nick Folk’s field goals were obviously very important in the outcome.”

The offense wasn’t the problem on Sunday and that’s probably the best thing you can say about Jones and the whole operation right now. The young quarterback is going to keep this team in games even if the defense continues to play down to the presumed “lesser” teams in the league, although in fairness, 2-3 doesn’t scream elite franchise. Jones has a long way to go before he reaches the Tom Brady career game-winning drive record, but you’ve got to start somewhere and the win in Houston was an important one early in his career.

“Yeah, he’s tough,” Henry said of Jones. “He stands in there. It says a lot to the older guys, guys that have been around, to be that young and stand in there and fire the ball, it gives a lot of confidence to the receivers, tight ends and to the offensive lineman, too. He’s doing a tremendous job.”