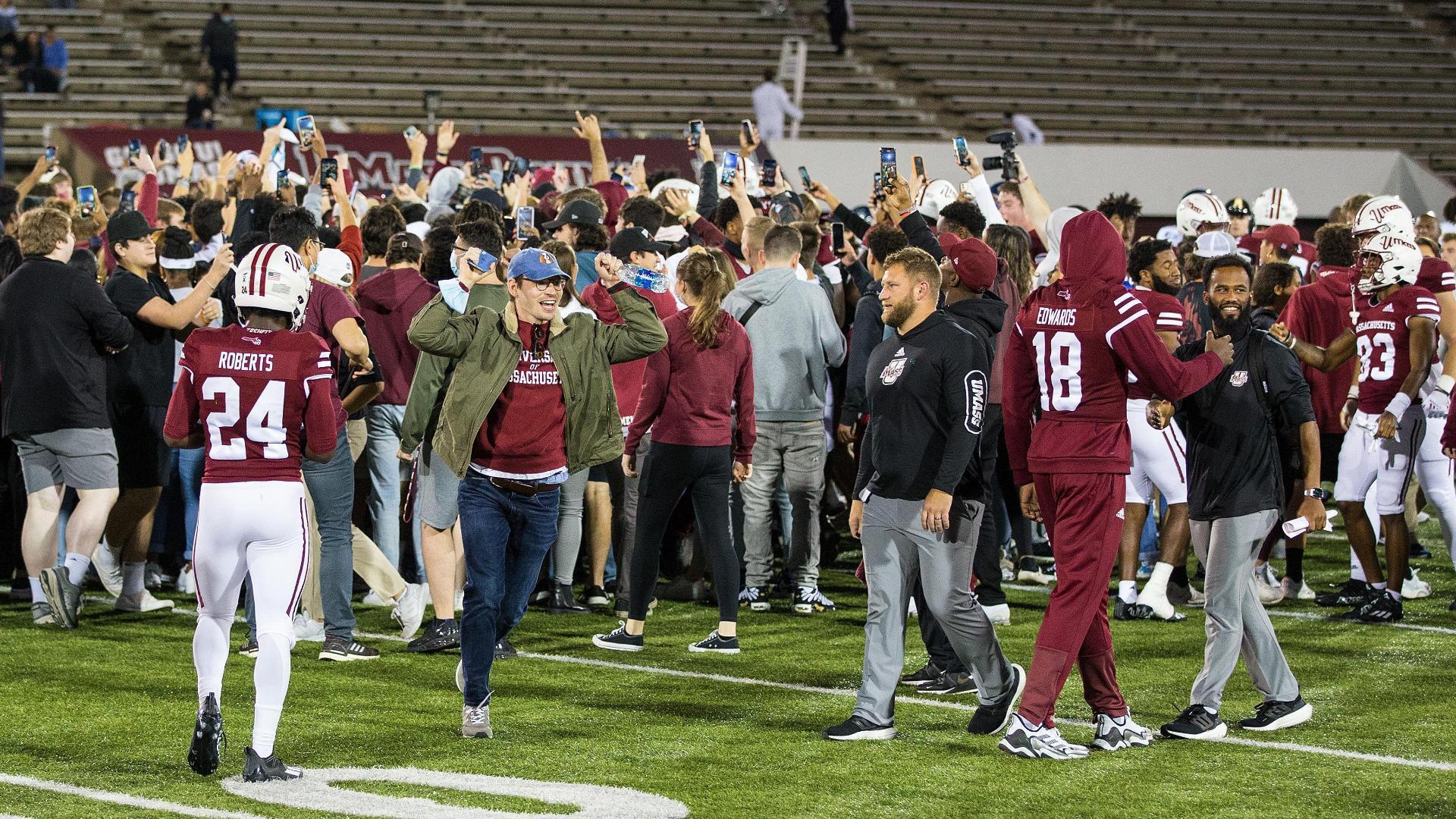 The eyes of the college football world were upon Warren McGuirk Alumni Stadium to tune in to the “Battle of the Beaten”, a term coined by supporters of both programs on social media leading up to kickoff. With features in USA Today, ESPN’s College Gameday, and Fox’s Big Noon Kickoff, this usually quiet regional rivalry meant a little more this time around.

At the end of the day it was UMass (1-5) who got the last laugh on the nation with a 27-13 win over UConn (0-7) to end their 16 game losing streak. While at times it wasn’t the prettiest game to watch, the put up or shut up mantra from a starving fanbase was quieted, at least for now.

Redshirt junior running back Ellis Merriweather ran the ball 39 times for 171 yards with two touchdowns, averaging 4.4 yards a carry. With the Minutemen down Rutgers transfer Kay’Ron Adams for the rest of the season, Merriweather rose to the occasion as the lone back used all day. Though by his side, or rather front, was freshman quarterback Zamar Wise who carried the ball 11 times for 64 yards and a touchdown.

With freshman quarterback Brady Olson taking most of the snaps at quarterback  to throw for an decent 162 yards on 10 of 22 passes, it was Wise’s feet that made a big impact all game, despite having little action so far this season.

One fan of the in and out action was Merriweather himself who on one drive alone touched the ball eight times. “When Zamar comes in they (defense) think run so now they have to key in on him and forget about me. Then they key in on me next and forget about him again, then we have 12 (Olson) do what he does and deliver to our receivers which gives us a great variety in the offense,” Merriweather said.

UMass RB Ellis Merriweather on how preparation helped him and the team, as well as what the win meant@newftbj @AdamKurkjian @kstone06 pic.twitter.com/y9rSVTjCUy

After a quick three and out for the Huskies to start the game the Minutemen marched down the field for Merriweather’s first touchdown of the game on a 9-yard run, capping off an impressive 12 play, 73-yard drive. Though the joy of a rare UMass lead was quickly cut short by a three-play, 74-yard drive that lasted just 56 seconds thanks to a 34-yard touchdown pass from UConn’s redshirt sophomore quarterback Steven Krajewski to tie the game at 7.

UConn’s next possession showed tremendous promise early on with freshman running back Nate Carter getting his solid day off to a great start, where he ended up finishing the day with 20 carries for 176 yards. His efforts that drive came up a bit short as the Huskies were only able to muster up a 38-yard field goal from Joe McFadden with 1:56 left to go in the first quarter to increase their lead to 10-7.

A mostly underwhelming rest of the first half for the Minutemen offense saw them have three straight three and outs at one point, with a dangerous Olson pass at their own 14 yard line almost resulting in a pick six from UConn’s sophomore linebacker Jackson Mitchell.

UMass did have a chance to tie the game after a Donte Lindsey interception with 43 seconds left in the second quarter set them up with excellent field position, only to have Cameron Carson miss a 26 yard field goal as time expired to keep the game at 10-7.

A criticism by some under in the Walt Bell era has been the ability to make adjustments, but Saturday appeared to be a step in the right direction as the Minutemen would outscore the Huskies 20-3 in the second half.

A 10 play, 72-yard drive to open the third quarter may have only resulted in a 21-yard Cameron Carson field goal, making up for his early misstep, but it set the tone for the rest of the half with the game tied at 10. A quick three and out and a deep 53-yard field goal miss for UConn opened the door for another possession by the Minutemen that resulted in a consecutive Cameron Carson field goal to get the lead back to 13-10.

The muskets were really firing in Amherst at the start of the fourth quarter with a huge Bryce Watts interception for UMass on just the second play from scrimmage to set up the Minutemen on the Husky 6-yard line. An Ellis Merriweather 1-yard touchdown run gave the Minutemen a 20-10 lead.

UConn responded quickly with an efficient drive that only resulted in a field goal, leaving the door open for UMass to add to their lead with Zamar Wise’s one yard touchdown run to put the game seemingly out of reach 27-13.

An unintentionally onside squib kick bounced the Minutemen’s way on the kickoff after, giving UMass fans something they’d been waiting since September 2019 for, victory.

Asked on his feelings after the game UMass Head Coach Walt Bell was pretty straightforward, it’s all about the kids. “I’m just happy for the kids, I don’t necessarily care very much about how I feel, I’m glad those kids got to get a win,” Bell said. He also added about how well they handled adversity throughout the game despite the tough season so far. “I know it hasn’t necessarily manifested itself in wins and losses, but our kids prepare, they play their asses off, no matter the adversity that’s put in front of them.” Bell also noted how their poise was another factor in the way they carried themselves together as a team.

UMass HC Walt Bell on the adversity that his team showed today and how proud he is of their efforts after all they’ve been through so far this season @newftbj @AdamKurkjian @kstone06 pic.twitter.com/e1CRgs519o

After a whirlwind of a week the Minutemen come into a bye with momentum, though for this injury riddled team it could be a chance to regroup and rest up for the following week with a trip to Bell’s old employer, Florida State.

And that’ll do it from Amherst! The Minutemen have finally ended their 16 game losing streak with a 27-13 win over the Huskies. Think these UMass students are excited? @newftbj @AdamKurkjian @kstone06 pic.twitter.com/PwQigZkl85

While UConn will be reeling from a loss they too envisioned to be a winnable game, a meeting with Ivy League and in-state rivals Yale awaits them next week.

Both programs are at a crossroads, but no more does that road feel murky than for the Huskies after today. At least for now, with UMass facing a favorable second half of the season schedule, there may be reason for hope. Though as so well said in the hit tv show Ted Lasso, “it’s the hope that kills you.”