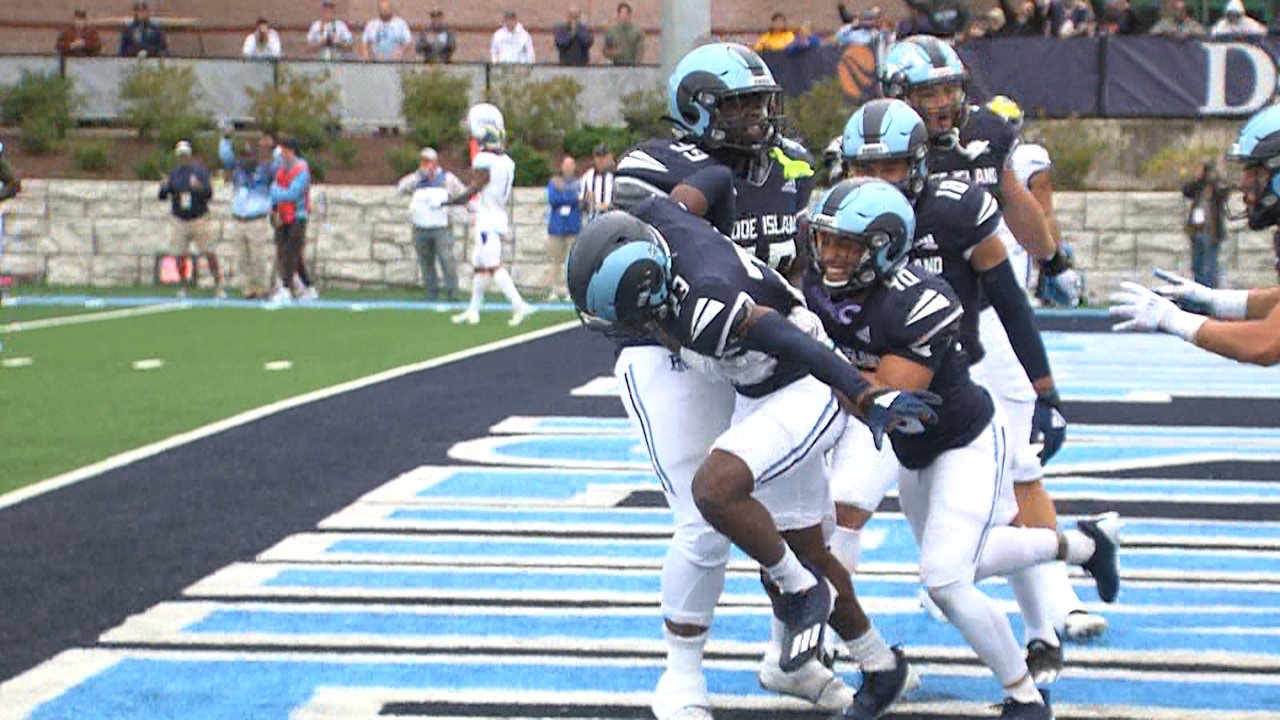 KINGSTON-It is not often that the University of Rhode Island is undefeated through five games. In fact, this only the fourth time in the program’s history.

Thanks to Saturday’s upset win over Delaware, the Rams are 5-0 for the first time since 1957.

In a game that was back and forth, it was Rhode Island’s special teams and a couple unheralded fifth year seniors that made the difference.

With the game tied at 15 late in the fourth quarter, defensive lineman Andre Bibeault blocked a Blue Hens punt which was scooped up by fifth year senior, LB Mack and returned for a touchdown. In a season that has been a pleasant surprise for Rams fans, winning a game like may have been the biggest surprise.

Both Bibeault and Mack credited his preparation and experience for making the play.

“We work this every day in practice — scoop and score,” Mack said. “You don’t rise to the occasion. You fall back on your training.”

LB Mack talks about his personal journey and his time at URI after scoring on the block punt today. @RhodyFootball @CAAFootball @AdamKurkjian @kstone06 @TheRealRBarry pic.twitter.com/VnMqpuvY1F

Bibeault echoed Mack’s sentiment. “The game was a testament to what we stand for as a team, I’ve been here for a long time. Doing the little things right over six years, that’s what it gets you.”

The Rams have been doing the right things thus far in their 5-0 start. Thanks to a solid group of seniors and infusion of talent through the transfer portal, Rhode Island has emerged as a contender in the CAA (Colonial Athletic Association)

Rhode Island wins the old fashion way. They run the football, play good defense and make timely plays on special teams. Yesterday was a prime example of that.

Quarterback Kasim Hill has played at Walter Payton award winning level thus far this season but he was under duress all day by the Delaware defense. Enter senior running back Justice Antrum who carried the load offensively for the Rams rushing for 122 yards on 30 carries. It was Antrum’s second consecutive 100 yard game and the second 100 yard game of his career.

Antrum’s performance embodies everything this program is right now and head coach Jim Fleming said it best in his post game comments regarding the players on his team.

“You get a peanut butter and jelly sandwich instead of a steak? They don’t care. They go out and battle.”

Perhaps no player best represents this mindset than junior cornerback Jordan Jones who intercepted two passes yesterday and has five on the season.

Jones has been a playmaker for the Rams all season long but the mild mannered JC transfer plays with a certain swagger and confidence as well.

“I’m very confident in my hands and my ball skills,” Jones said. “That’s one of my strengths in my game.”

It certainly is. Jones stayed in phases in his coverage all afternoon and that technique and an understanding of his coverage responsibilities positioned him to make two big plays defensively for the Rams.

Despite the big win, Fleming and the Rams are not content. They know they have a long road ahead of them.

That work begins tomorrow as the Rams travel to Towson next Saturday for a 4:00 pm kickoff.