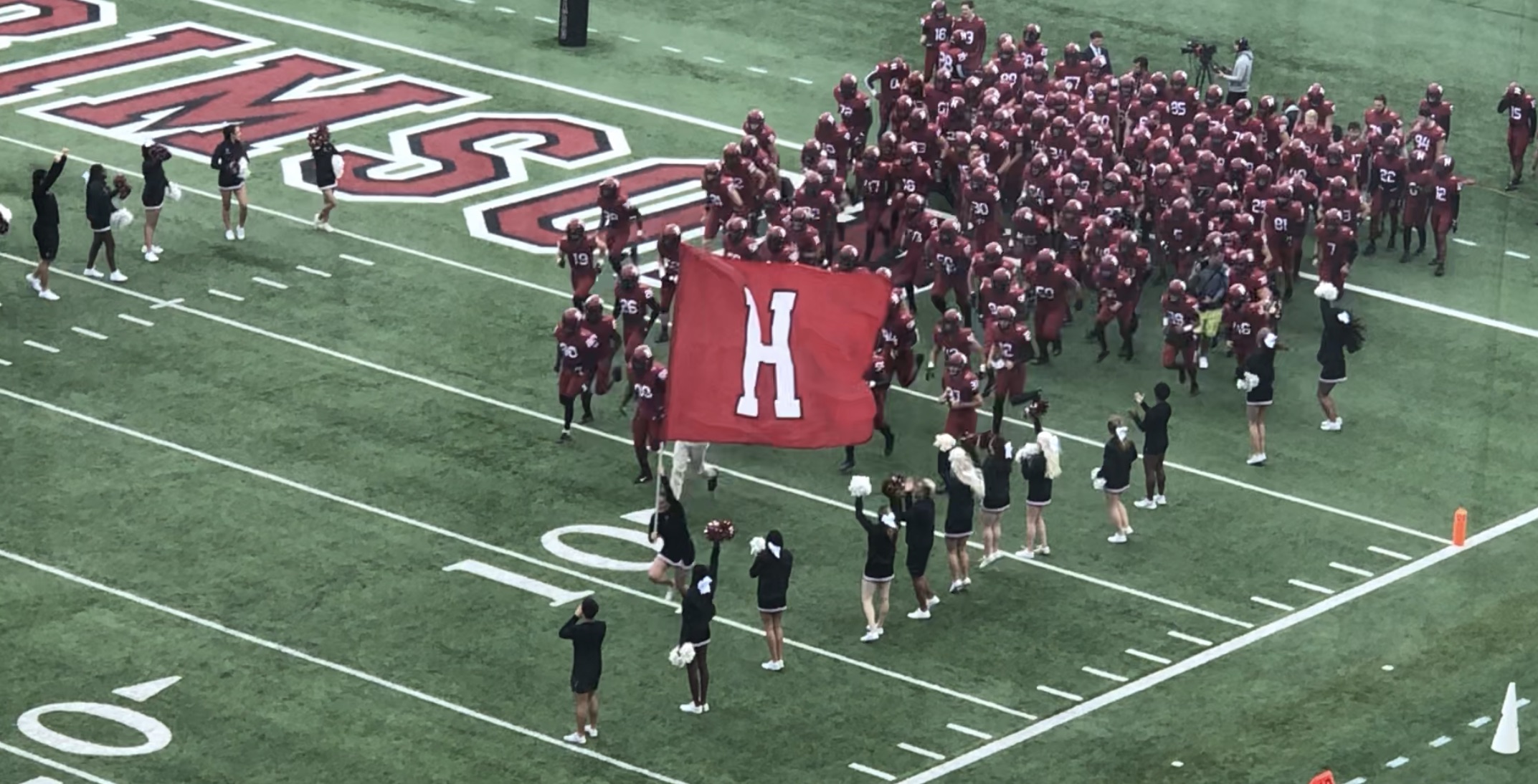 BOSTON – A week ago, Harvard head coach Tim Murphy was most proud of his team’s resilience in a road win over Holy Cross.

On a beautiful but blustery Saturday afternoon at Harvard Stadium, the Crimson once again found themselves staring adversity in the face and once again, the team responded.

Held to just three points in an ugly first half, Harvard outscored Ivy League rival Cornell by 18 points in the second half and held on for an important 24-10 win. The victory keeps No. 22 Harvard unbeaten at 4-0 (2-0 in the Ivy League) and most importantly, it keeps the Crimson tied atop the standings with Dartmouth and Princeton who both squeaked out wins on Saturday.

“Great team effort today,” said Murphy following the win. “We struggled in the first half, particularly on offense. Obviously, we had some adversity again like we did last week. The biggest plus is, this team always plays us tough, everybody in our league is good. The reality is, if we continue to play the type of defense we played. We’re going to be in the hunt.

“We’re playing at a really high level right now (defensively) we’ve just got to pick it up running the ball a little bit, but I’m really, really proud of our kids, especially the adversity piece.”

It was a nightmare start for Harvard to say the least. The defense – as it did all day – did its job forcing a three-and-out on the game’s first series. Unfortunately, the offense wasn’t quite ready to answer the bell yet and Jake Smith’s first pass of the game was picked off. Three more punts followed, but the defense forced two punts of its own and also got a turnover on downs in the first, keeping the game scoreless. There was also a muffed punt in the first 15 minutes for the Crimson too.

Harvard got on the board with a Jonah Lipel 20-yard field goal early in the second quarter after Charles DePrima blocked a punt. Five plays after the field goal, Cornell’s SK Howard ripped off a 24-yard touchdown run to give the big Red a 7-3 lead with 4:30 left in the half.

Charlie Dean (12-of-24, 204 yards, 1 TD) took over the quarterbacking duties for the day during the second quarter, but the Crimson offense could only muster 94 yards of total offense. Luckily, the Cornell offense sputtered at times too and Harvard was down just 7-3 at the break.

The Crimson looked like a different team to open the second half as Dean led a 10-play, 75-yard drive that ended with a one yard touchdown run from Aaron Shampklin (18/114/2 TD) for a 10-7 lead. Cornell answered with a 33-yard field goal from Scott Lees tying the game up with 5:27 to play in the third.

Just one play after the kickoff, Dean threw a quick screen to B.J. Watson and he did the rest, taking it 75-yards to the house to make it 17-10 with 2:40 to go in the quarter. The Crimson got a huge turnover on downs at its own six yard line with a 4th-and-one stop to take momentum into the fourth quarter.

“Honestly, it was an 11-man effort,” said Watson of what was ultimately the game winning score. “They threw me the ball, but what you didn’t see is he tackle, the center they came and washed the whole defense down. All I had to do was just follow my blockers and everybody just blocked it up. It’s all 11 guys being on the same page.”

The teams combined for four more punts and another turnover on downs for the Big Red until a 35-yard touchdown run from Shampklin iced the game with less than two minutes remaining.

The Harvard defense gave up 299 yards of offense, held Cornell to just two third down conversions out of 16 attempts and held the Big Red 0-for-4 on fourth downs. There was 7,414 in the stadium on Saturday, but at times it sounded like 20,000.

“It was great, love the energy,” linebacker Jordan Hill said. “It really gets us going, but if there was nobody in the stands we’ve still got to come with the same energy and effort and that’s what we do. It’s great having fans back out, we love it, especially after missing last year. At the end of the day, this is the effort you’re going to get out of us every week.”

You don’t win a defensive struggle without some key special teams play either. One of the more underrated players of this win for the Crimson was punter Jon Sot. Sot punted seven times for 278 yards, had a 56-yarder and most importantly, he pinned Cornell inside the 20 three times without any touchbacks.

It wasn’t pretty, but not all of them can be. It was another gritty team effort for Harvard and that’s just the way Murphy likes it.

“For the second week in a row, we get in a tough situation and that’s when we actually played our best football,” he added.