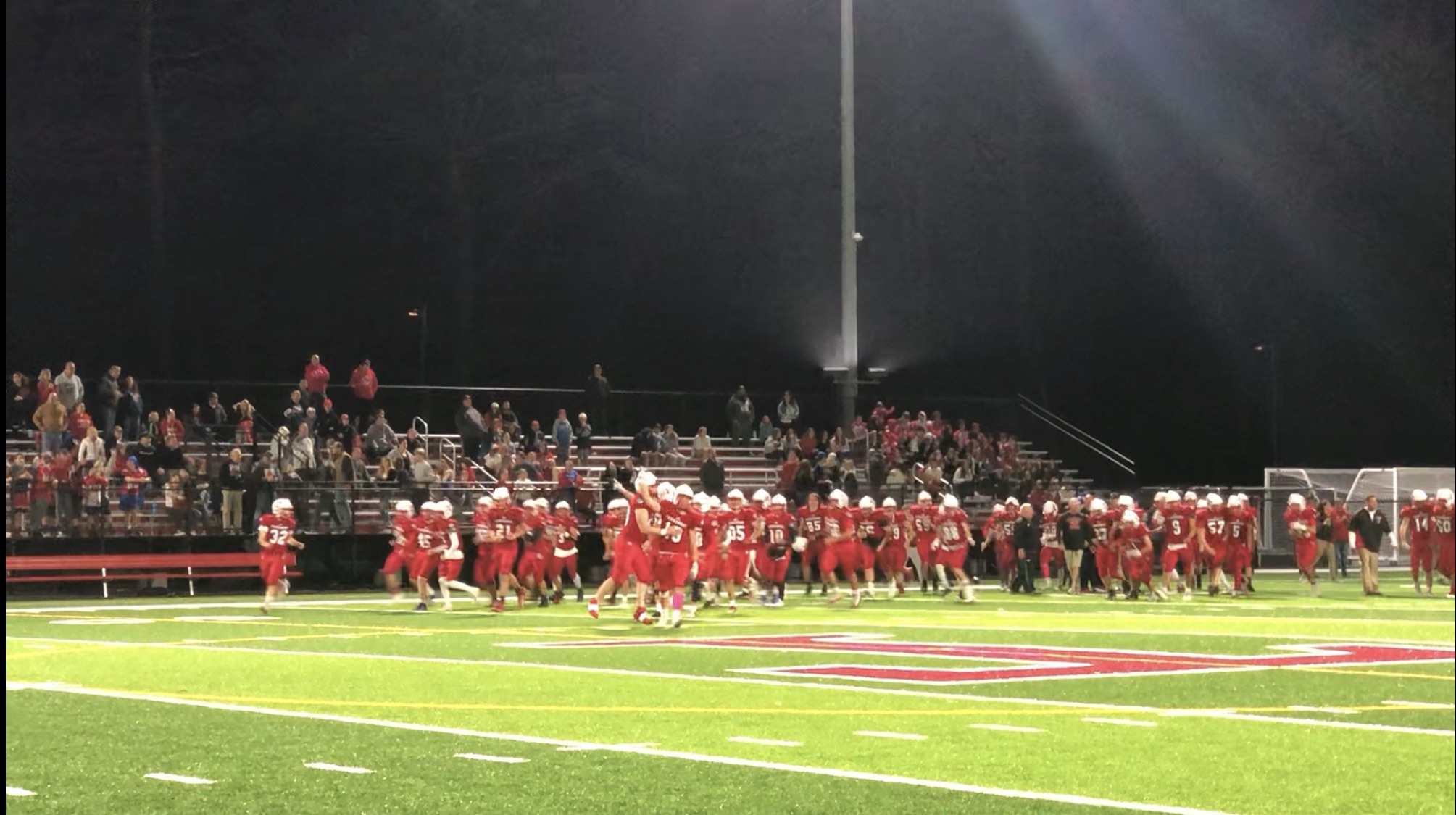 TEWKSBURY – It’s far too early to know just how big Michael Sullivan’s game winning interception on Friday night was for Tewksbury, but it was a potential season altering play.

The Redmen hosted Billerica in a crucial MVC matchup that turned into a defensive slugfest. Billerica had the ball and was driving for a potential game-winning score in the final minute before Sullivan picked off a Joseph Green pass over the middle to seal a nail-biting 12-10 win in the New England Football Journal Game of the Week presented by Gold Athletics.

The Redmen went up 12-3 with 6:26 to go when Fleming (27 carries, 135 yards) punched it in from the one. Prior to the touchdown, Tewksbury began the fourth quarter facing 4th-and-2 at the Billerica 37, but a false start forced the Redmen to punt. The Tewksbury defense ended up forcing a turnover on downs at the Redmen 42, setting up the nine-play drive.

The Indians responded – aided by a pass interference call on 3rd-and-16 – when Jacob Metivier hauled in a 32-yard touchdown pass from Joseph Green, cutting it to 12-10 with a Shaan Rana PAT.

The Billerica defense forced a punt with 2:21 left & the offense took over at the Indians’ 14. With under a minute left & the ball around midfield, Sullivan picked off a deep pass over the middle to seal the win.

“It’s always a great day to beat Billerica,” Sullivan said. “I love it, it’s amazing,” he added when asked about the electric atmosphere the crowd provided.

“Tonight says a lot about our toughness & ability to stay in the game,” added Tewksbury head coach Brian Alyward. “Guys did a great job staying in the moment & playing with a sense of urgency.”

After a scoreless first quarter that saw both teams punt twice each, Billerica’s Dominic Gird recovered a fumble at the Tewksbury 30 on the 1st play of the second quarter. The Redmen defense ended up standing tall with a goal-to-go stop and the Indians settled for a 24-yard field goal from Rana for a 3-0 lead with 8:29 left in the half.

Fleming answered by leading a 10-play, 80-yard march that included two different fourth down conversions. On the 10th play, Fleming ripped off a 17-yard touchdown run. Gird blocked the PAT, leaving the score at 6-3 with 1:02 to go in the second. Billerica drove to midfield in the final seconds of the half but Sullivan’s first interception inside the Tewksbury five sent the Redmen to the locker room up three.

The old saying is that defense wins championships. Both Billerica and Tewksbury played championship caliber defense on Friday, but it was the Redmen making that one extra play that could pay dividends when the postseason rolls around.

“These guys fight hard,” Alyward added. “I thought they did a really good job…it had a lot to do with the senior leadership, it always boils down to that. Those are the guys that as long as they have faith that they can reset and get (momentum) back, that’s the key. Bad things are going to happen and things aren’t always going to go the way you want them to go, you’ve got to be able to move on to the next play.

“We preach that all the time and these guys get that, I’m really proud of what they’ve done so far and how hard they’ve played for us.”