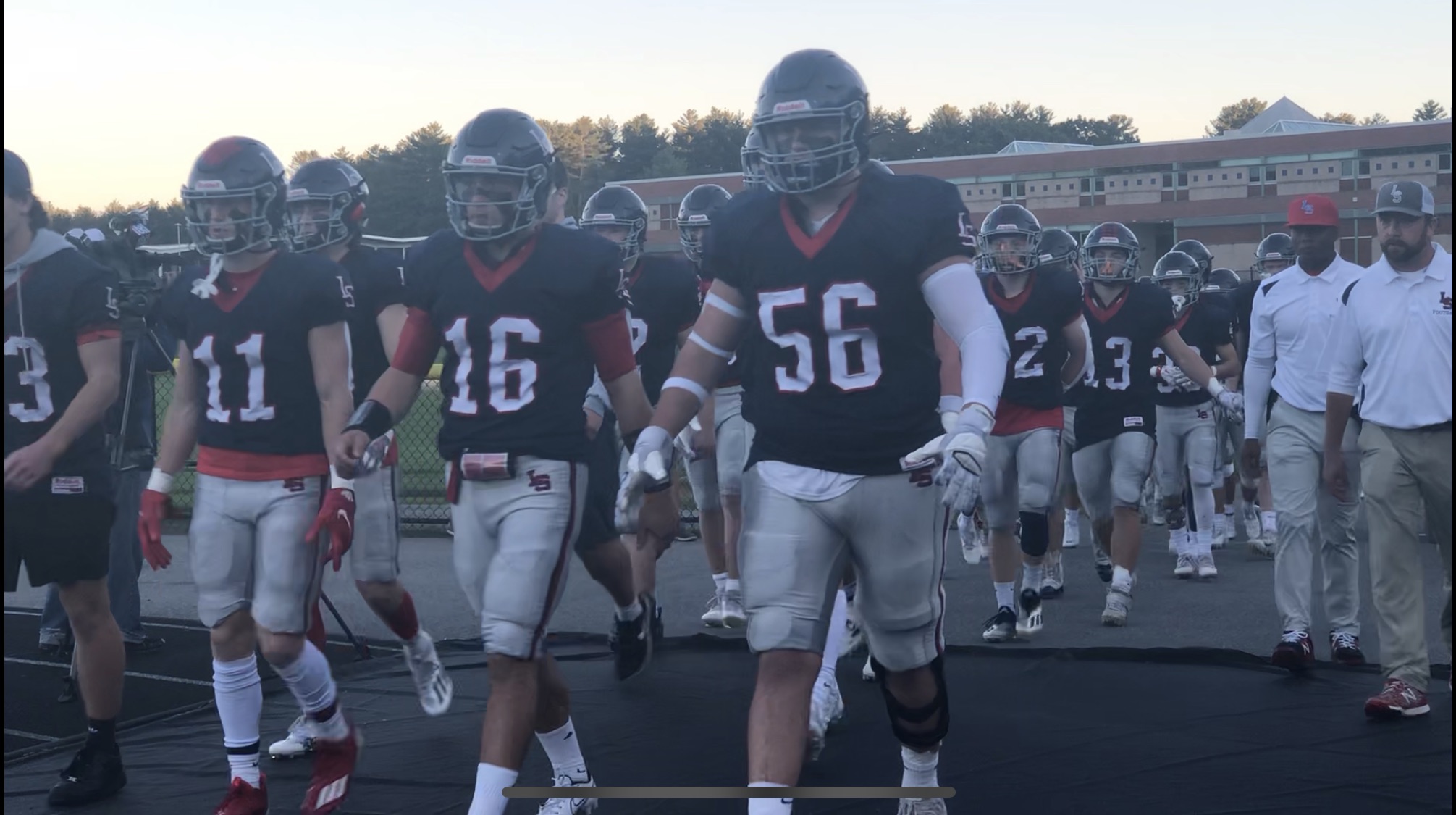 After a non-team related fireworks incident that put Fitchburg cheerleaders and fans in danger during an LS victory last weekend, the Warriors had their first DCL contest of the season against their rival moved to Thursday at 6 PM with only two parents or guardians allowed in per player and cheerleader for both teams.

The usual raucous crowd for the AB-LS matchup was sorely missed, but No. 7 Lincoln-Sudbury rolled to a 49-13 win to remain unbeaten at 4-0. First year Acton-Boxborough head coach Justin Bernard has had his team ready to go in every game and they’ve remained competitive, but fall to 0-5.

“Our kids play with a lot of emotion, as they should,” said L-S head coach Jim Girard when asked how important it was for the Warriors to create their own with no student sections on hand. “I thought the guys handled themselves with a lot of class and maturity this week, it’s a wonderful group led by our captains and the senior class. We love having our fans out there, but it didn’t matter. L-S vs. A-B is a great rivalry and you could see it with how tough A-B came out and played early and how tough they played the whole game.”

A-B did play tough the whole game, in fact, A-B actually led 6-0 after the first possession of the game. On the second play from scrimmage Eamonn Murray hit Jack Lehouck for a long play down to the L-S 26. The Warriors eventually jumped offside on 4th-and-2 to extend the drive and Tyler Clayton ran it in on the next play from the 18-yard line, but the PAT was no good.

A-B’s offense moved the ball pretty consistently throughout the night but penalties and mistakes killed them. Another long catch by Lehouck put Acton-Boxborough at the L-S 39-yard line, but they ended up going backwards and punted. Six plays later it was 21-6 thanks to a 28-yard touchdown run from Thomas Dillon.

After a turnover on downs thanks to a 4th-down pass break up from Jack Napier, the senior hauled in a long pass the very next play down to the A-B six. A few plays and penalties later, Dillon had another touchdown run, this time from 11-yards out for a 28-6 lead heading into halftime.

“A lot of emotion this week,” said Dillon. “Not being able to play in front of our fans on a Friday night was a tough one for us, but I think we still worked hard and we had a good week.”

The Warriors opened the second half with an eight-play, 80-yard drive capped by an O’Connell 1-yard TD run for a 35-6 lead. O’Brien picked off Murray on the next drive in L-S territory and nearly had a long pick-six but was pushed out of bounds at the two. One play later O’Connell’s third rushing TD pushed the lead to 42-6. Late in the third, Darius Braithwaite punched in a touchdown run from a yard out for the 49-6 lead heading to the fourth.

A-B capped the scoring with 4:41 to play on a 30-yard touchdown catch by Lehouck.

Despite the negative coverage surrounding the school throughout the week and a number of TV cameras on hand and helicopters flying overhead on Thursday night, good teams find a way to ignore the noise as a famous coach around here has preached throughout the years. The Warriors were able to do that and are now riding an 11-game winning streak after going 7-0 during the Fall II season.

Can anyone stop them?