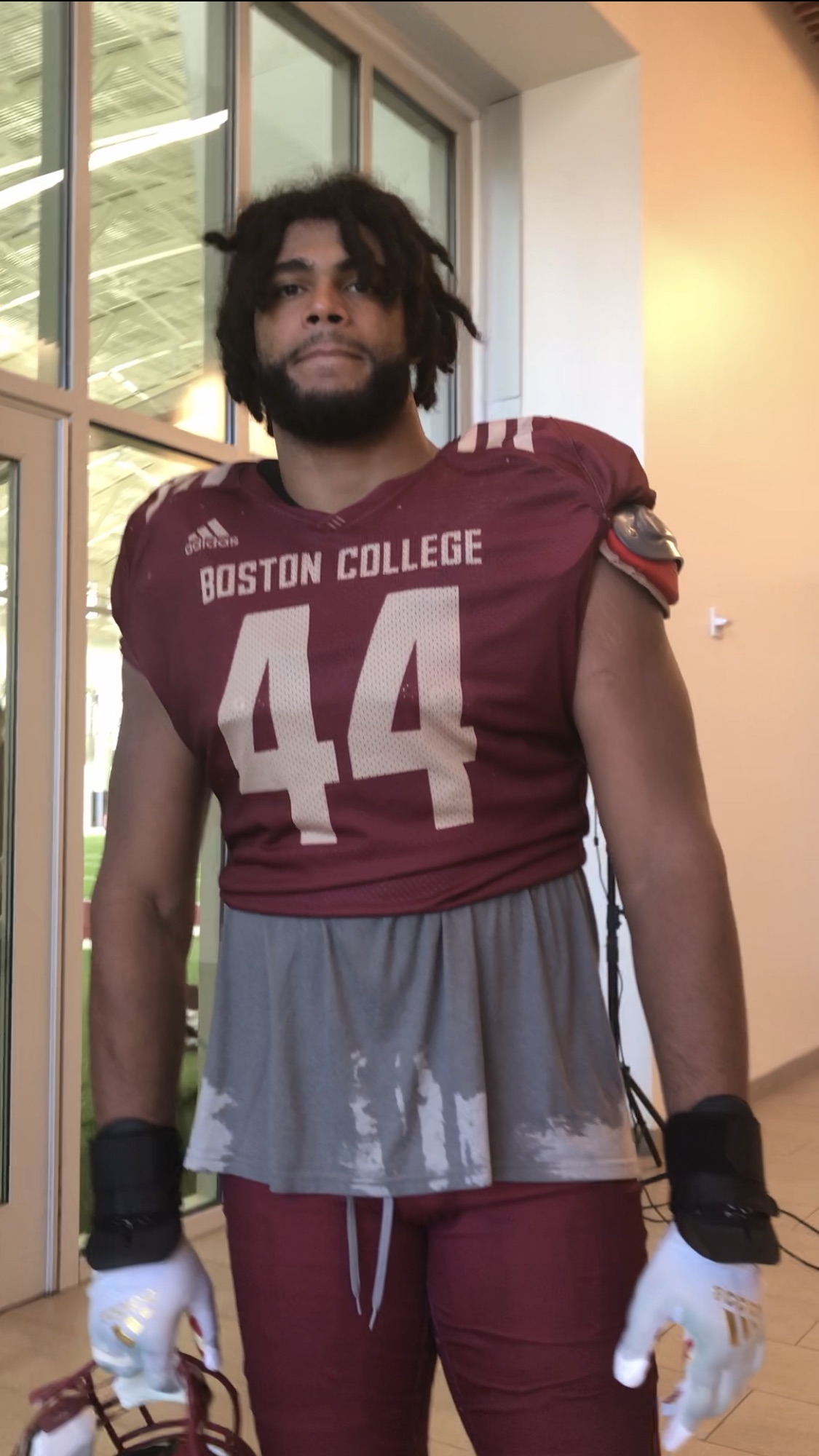 When the Eagles take the field under the lights at Alumni Stadium next Saturday night for a huge matchup with NC State, it will officially mark the midway point of the 2021 season.

Both BC and the Wolfpack will be playing game No. 6 on the 12-game schedule – not including potential conference title games or bowl games of course – and while there will still be six games remaining, it also means that this special group will only have about two or three months left together.

The Eagles were back at practice for the first time since the Clemson game on Wednesday, using the bye week to not only get over the excruciating loss, but to make sure guys are healthy both mentally and physically. For some of the older players, this week is also providing an opportunity to reflect a bit as their college careers are suddenly winding down.

“The season’s definitely flying by,” admitted Brandon Barlow. “It’s something you don’t necessarily pay attention to, then next thing you know, you look up and it’s like ‘woah, we’re on week six right now, is that for real?’ but you’ve just got to take it day-by-day really. I feel like that’s what makes it go by so fast, but it’s the right way to do it.”

For Marcus Valdez – who still has his hand heavily wrapped – having to miss the first few games was tough, but he too feels like this year is going by quickly.

“Super fast,” when I asked Valdez if it’s felt like the season is flying by. “When I wasn’t playing it was kind of slow and I was like ‘man I just want to get back,’ but now since I’ve been back these last two games have really flown by. Before you know it, it’ll be the 10th, 11th, 12th game, for me personally I’m just trying to cherishing the moment especially not being able to play those first three. Every game really counts, trying to just give everything you’ve got and make the most of it, but yeah the season definitely feels like it’s flying by, I remember when we started fall camp.”

Alec Lindstrom has replayed the final fumbled snap against Clemson over and over in his mind since the game, but he understands that those types of moments need to be thrown away as quickly as possible because of how quickly the season moves week-to-week.

“It was really hard,” Lindstrom said of getting over the loss in Death Valley. “It didn’t end the way we wanted and there were some procedural things that happened and I take responsibility for that. I know Dennis (Grosel) does too, but as frustrating as it is I’m still proud of how the O-line played, how the offense played, how Dennis played. You go out there and we’re on the 20-yard line two drives in a row, he takes us to the 10 right away against one of the best defenses in the country, so I’m proud of how everyone did. Personally and as a team we’ve got to execute better. This week is about getting your body back feeling good because we’ve got a big stretch coming up.”

Lindstrom also acknowledged he’s trying to embrace every moment – good or bad – for the remainder of the 2021 campaign.

“It feels like yesterday I was on the fan bike throwing up,” he said with a big smile. “Like, man, what am I doing? But, yeah it’s flying by. Summer camp flew by, now the season’s flying by. It feels like yesterday was Colgate just yesterday. The bye week also allows you to reflect on ‘wow this is going fast’ and the next seven weeks is going to fly by…it’s going to be a lot of fun and I’m super excited.

“I’m trying to cherish every moment while I can because I know it’s going to fly by and just like that it’s going to be all over.”