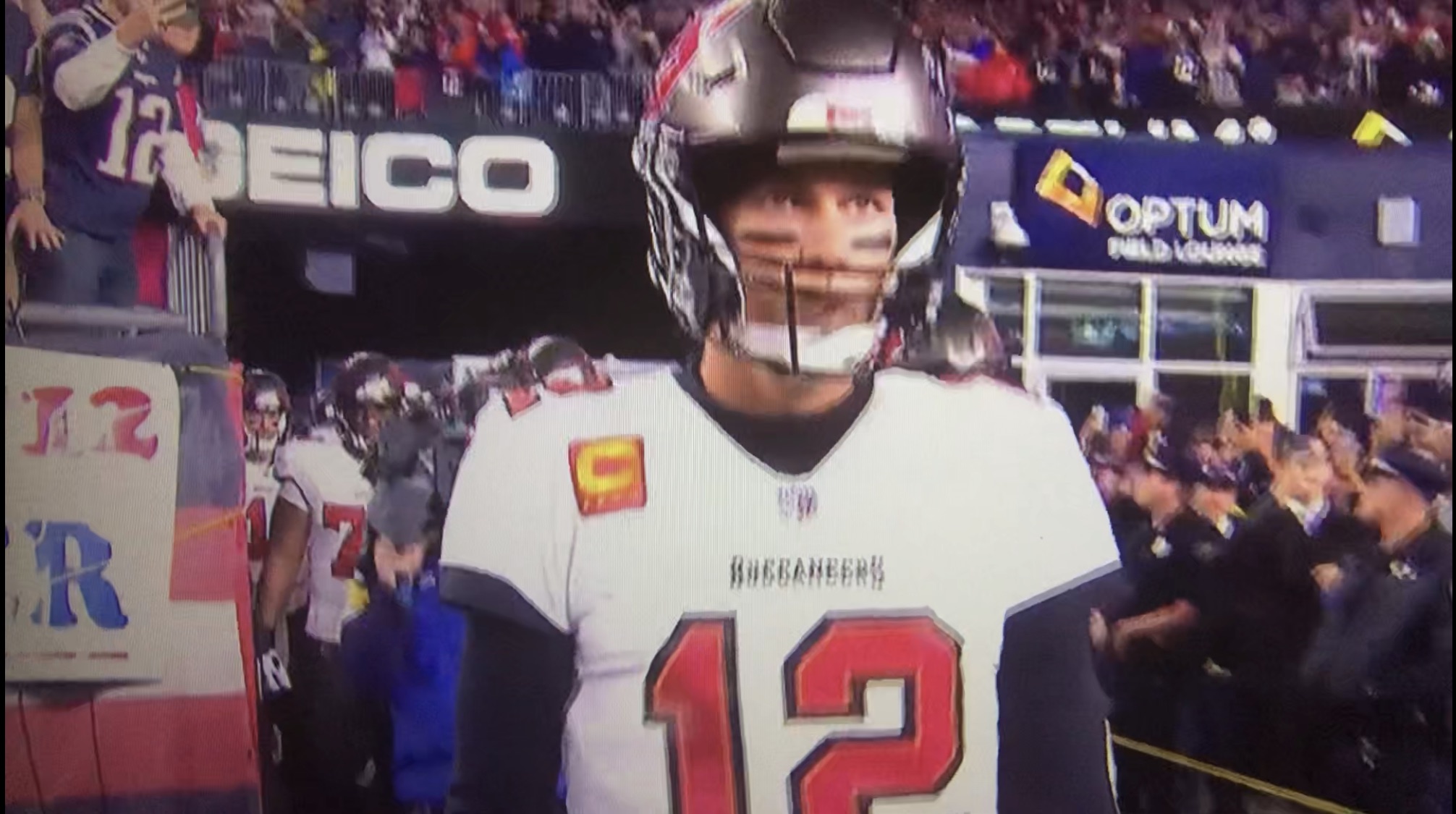 It was truly a night Patriots fans and the Brady family will never forget.

After so much hype – it felt like a Super Bowl the last two weeks – Tom Brady’s triumphant return to Foxborough on Sunday night had it all. You had the near perfect moment of him running out for pregame to a thunderous ovation. You then had the Bucs being introduced to another standing ovation and “Brady” chants. You had fans booing him as he took the field for his first offensive series and then you had them at full throat trying to make his life miserable for three hours. You got Brady becoming the all-time passing yards leader on the field he had the majority of those yards.

The only thing that would have made the night better for Patriots fans would have been in if Nick Folk’s 56-yard field goal went through the uprights, but it was rather fitting that Brady got to kneel out the game in what was most likely his final game at Gillette Stadium.

You even got the postgame handshake/hug from Belichick and Brady for the full amount of closure. For Brady – who admittedly didn’t play very well – it was a special night, but you could see and hear the relief in his eyes and voice now that it’s all over and the 2021 season becomes just a normal football season.

“Just an amazing night for our family,” Brady said in the postgame interview on NBC. “It’s great to get a win against a really good football team…it’s been my home for 20 years. I have the best memories here, my kids were born here. It’s just a great town, it’s a great city, a great area, I love it up here. I have so many people that I have relationships with, but this was about this team coming up here to win, this wasn’t about one player.”

That’s nice to say, but it was clearly all about one player, as it should have been. No one will ever have the impact on this region that Tom Brady did, so for him to leave Gillette Stadium – probably for the final time – with a win, is a pretty cool way to end that story. Even if you’re a Patriots fan, it’s hard to be too upset, especially with the way Mac Jones played on the other side.

Jones played extremely well and continued to show a poise that Brady made famous for 20 years. Still, the GOAT was the one setting the all-time record on Jones’ home field.

“I just think it’s amazing statistic in that so many people can share in it with me,” Brady said of the record. “Quarterback doesn’t throw and catch. Quarterback can just throw it. It’s yards. Passing yards have to be caught, so I just hope that everybody who caught passes from me over the years just had a little smile on their face tonight knowing they contributed to a very cool record. There are some people that have kind of preceded it by name, Drew Brees who I look up to, hell of a guy. Peyton Manning who is one of my all-time favorites. Brett Favre, Dan Marino.

“But obviously my teammates who caught all these passes over the years, mean an awful lot to me.”

In his postgame press conference, Brady again talked about his relationship with Bill Belichick. The two embraced at midfield after the game and then it was reported that Belichick spent over 20 minutes catching up with Brady in the Bucs locker room after the game.

“Yeah, I mean, all those are personal,” Brady said of the conversations with the HC of the NEP. “We got a personal relationship, you know, for 20-plus years. He drafted me here. We’ve had a lot of personal conversations that should remain that way and are very private.

“And I would say so much is made of our relationship. You know, as I said earlier this week, from a player’s standpoint you just expect the coach to give you everything he’s got, and I’m sure as a player that’s what he was hoping from me. But nothing is really accurate that I ever see. It’s all kind of – definitely doesn’t come from my personal feelings or beliefs. I got a lot of respect for him as a coach and obviously a lot of respect for this organization and all the different people here that try to make it successful.”

The GOAT got his love and adulation and left Gillette with a win. Bill Belichick can start talking about the Houston Texans now. Mac Jones showed he belongs on the biggest stages under the brightest lights.