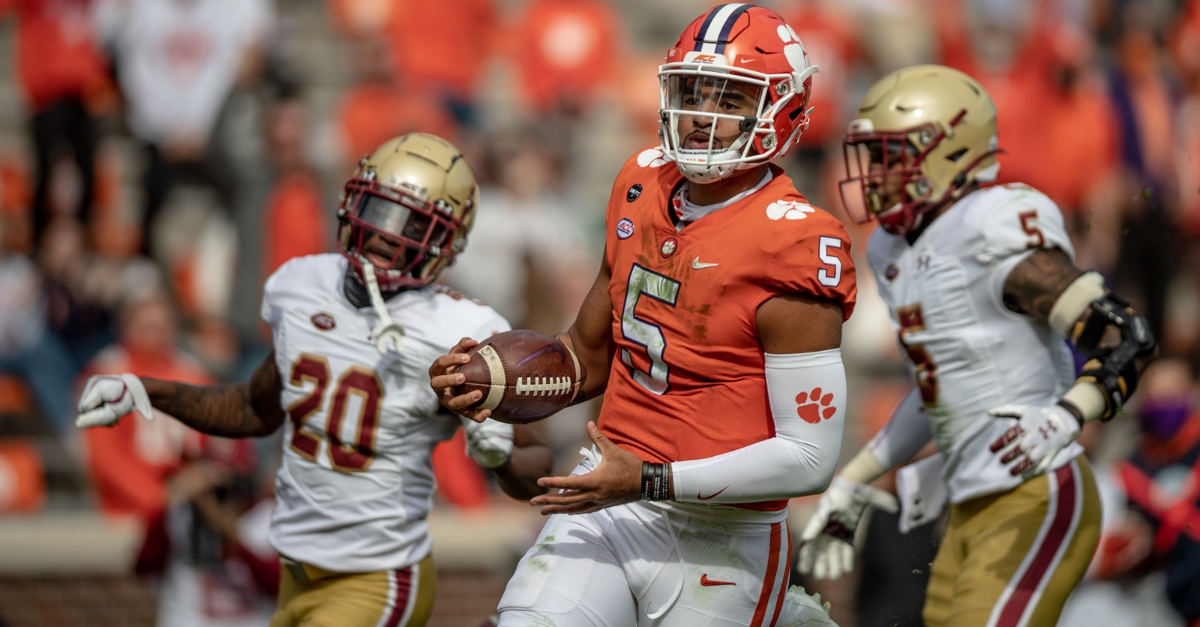 The storybook ending was already written, the Eagles just needed to execute for 11 more yards.

Trailing by six with 49 seconds left and the ball at the Clemson 11-yard line, BC was finally going to beat a ranked team for the first time since 2018 and end the Tigers’ 31-game home winning streak. Then, the unthinkable happened.

With the play clock winding down and deafening noise making things even tougher, BC QB Dennis Grosel took his eyes off center Alec Lindstrom for just a second to see the clock. The ball was snapped and Grosel wasn’t ready, it clanged off his hands and the Tigers recovered at the Eagles 22, clinching a 19-13 win and adding another painful “when will they get over the hump” log onto the fire for BC fans.

For Boston College (4-1, 0-1) this one is going to hurt for a long time. After so many ups-and-downs throughout the three hour game, the ending was a cruel way to cap what looked like it was going to be a special night for those wearing white. Instead, the finish invoked memories of the Ed Reed game against Miami, so close, yet so far from an upset.

“It was more so the play clock ticking down, I wanted the snap quicker, took my eyes off it to see where the play clock was at,” explained Grosel. “It just so happened that’s when he snapped it. We were pretty efficient with the noise all night, there were a few miscues that are going to happen, but (the final snap) was just one I took my eyes off of for half a second.”

With 1:56 remaining in the game, Jason Maitre sacked Clemson QB DJ Uiagaleilei and the Eagles quickly used their final time out, giving the offense the ball back at the BC 36 with 1:48 to go. Grosel methodically moved the team downfield to set up the final play.

“Proud of our guys, they came out here in a tough environment, night game, homecoming, it was loud and we didn’t flinch,” said head coach Jeff Hafley. “I thought we could take it in the fourth, we had a chance to take it in the fourth, certainly I could have coached a better game, but I’m proud of our players. I told the players we’re a team, we win as a team and we lose as a team, there’s no pointing fingers. We’ll stick together and we’ll be better.”

The Eagles defense had arguably its best performance in years against the Tigers on Saturday and BC trailed 13-6 at halftime because of it. Connor Lytton hit field goals of 22 and 34 yards while Clemson got a 59-yard TD run from Kobe Pace (19/125) and two B.T Potter field goals in the half.

Boston College received the second half kick off and needed just four plays to move 75 yards before Pat Garwo rumbled in from 4-yards out and a Connor Lytton PAT made it 13-13 less than a minute into the third quarter. Trae Barry (7/82) and Joey Luchetti hauled in catches of 39 and 33 yards respectfully before Garwo capped the statement drive.

The Tigers went up 16-13 late in the third after one of BC’s several red zone stands on the night. Clemson pushed it to 19-13 game on another field goal with 4:51 to go. The Eagles turned the ball over on downs on the ensuing drive thanks to some terribly-timed penalties. Boston College had 10 penalties for 60 yards on the night, but with the Eagles moving out to the Tigers’ 49 after a 17-yard completion to Zay Flowers, an ineligible man downfield call came and that was followed by back-to-back false start penalties, making it 1st & 25. BC was never able to recover, and Clemson took over at its own 23 with 2:10 left before the defense got the one final stand, giving Grosel and the offense a chance to pull off the win.

“It was loud, but that’s not an excuse, we’ve got to handle it,” said Hafley of the pre-snap penalties rearing their ugly head again on Saturday night.

In fairness, the officiating was terrible all night long for both sides, with the most glaring issues coming on a weak roughing the passer call against the Tigers in the first half and then a blatant offside later in the game during a drive where Grosel was sacked on third down. During the ESPN halftime interview, the officiating was bad enough where Clemson head coach Dabo Swinney said “it feels like we’re playing against 14 guys instead of 11,” before heading into the locker room.

For the Eagles and their fans, it will take a while to get over this one. The defense showed that it can play with anyone in the country despite giving up a whopping 231 yards on the ground, it was the ultimate bend but don’t break kind of night. Tem Lukabu and his unit’s performance is probably the most important thing fans can lean on coming out of the excruciating loss.

“I feel like we showed we’re definitely one of the top secondaries in the country,” said Brandon Sebastian. “We basically played man the whole game, we wanted to get up there and challenge their receivers and that’s essentially what we did. We took a lot of the stuff they had game planned for us away playing press-man a lot on every snap.”

The end result is still one that BC fans are all too familiar with when it comes to big games over the last decade or so, but it’s also very clear that this team is different mentally. The Eagles walked into Death Valley for a second straight year and nearly came away with the upset, going toe-to-toe with the big bad Tigers. It’s understood that “nearly” isn’t going to cut it and the penalties absolutely can’t continue, but if you don’t think Hafley has this team believing they can still win the ACC, you haven’t been paying attention.

“We can play with anybody, anywhere, at any venue, at any time of the night,” Hafley added. “I’m proud of the team, certainly hurting right now, but we’ll be back.”