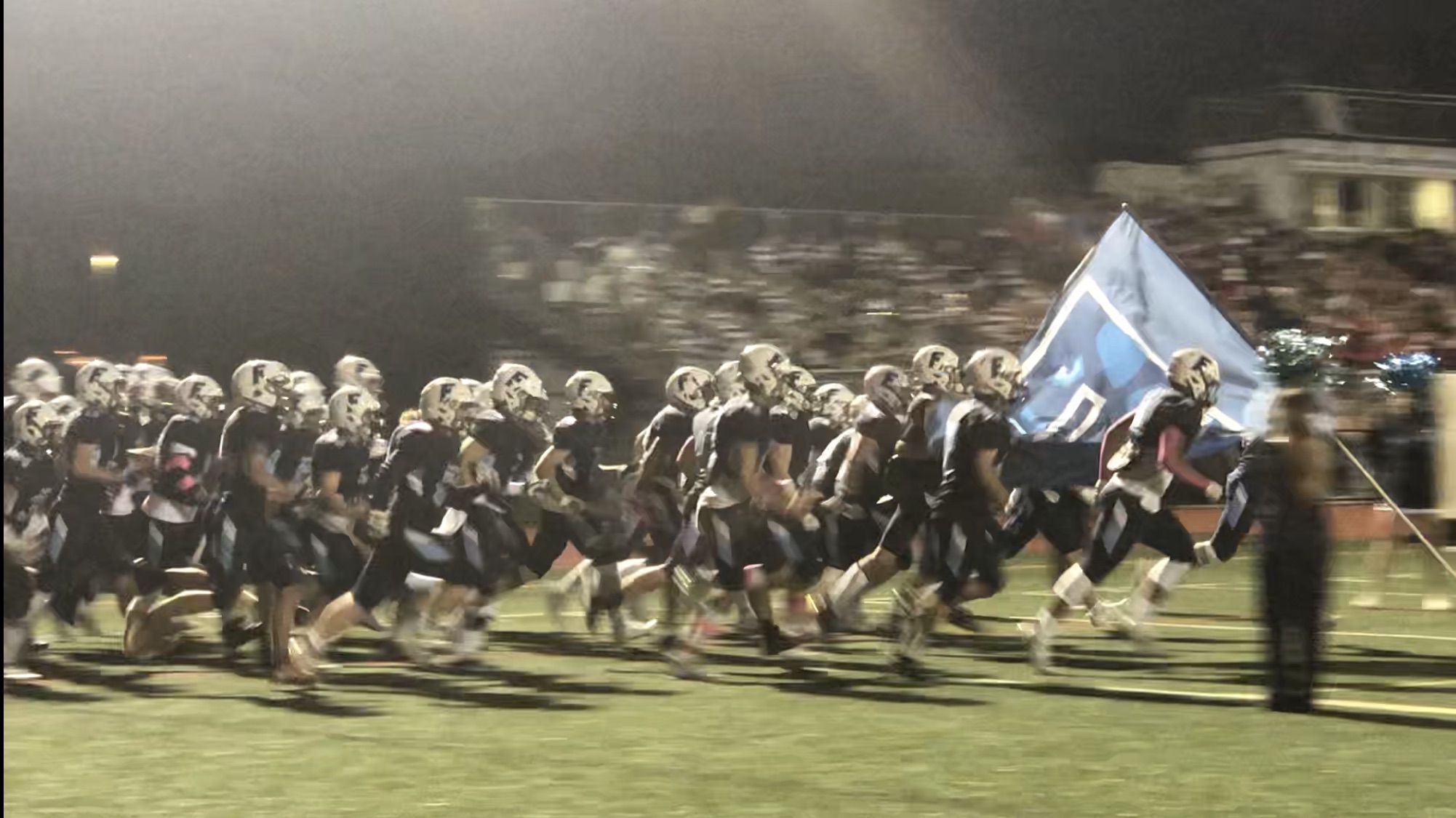 FRANKLIN – In 2009, Tom Brady had only won three Super Bowls and was a year removed from a torn ACL. The Red Sox had only won two World Series titles, the Celtics were the defending NBA champions and the Bruins were two years away from winning a Stanley Cup.

Thanks to four touchdown passes from the Gold Athletics Player of the Game Jared Arone and a dominant 170-yard rushing performance from Mack Gulla, the 11th-ranked Panthers (4-0) dominated fourth-ranked Mansfield (3-1) 28-10 to earn the program’s first win over the Hornets in 12 years. The win for Franklin also snapped the longest win streak in all of Massachusetts for Mansfield at 19 games.

“I just think it’s the way they’ve worked, the way they’ve handled everything,” Franklin head coach Eian Bain said when asked what gave his team the belief they could stop the runaway freight train that was Mansfield. “Last spring wasn’t easy, we played a lot of young guys, we didn’t get in the weight room until June of this year, so we went a whole year and a half almost without getting in the weight room as a team, without meeting in person as a team, we didn’t have a proper training camp and we’ve had to do all those things.

“We’ve got a great group of seniors and we’ve had the chance to just let them be seniors this year and it’s paid off.”

After both teams traded punts to open the game the Panthers struck first with 7:22 left in the first quarter when Arone (10/14, 210 yards) hit Shane Kindred for a 56-yard bomb off play action – something Franklin did quite a bit on Friday – and Garrett Portesi added his first of four extra points.

After a second straight Mansfield three-and-out Arone was picked off two plays later by Trevor Foley at the Hornets’ 29. Mansfield drove down to the Franklin 16, but the Panther defense stood tall and eventually earned a big win with a missed field goal to leave it at 7-0 after one.

The Panthers rode that momentum into the second and put together a methodical 14-play, 80-yard drive that took up more than half of the quarter. The drive ended with 5:43 left in the half when Arone rolled out and hit Grayson Hunter in the back right corner of the end zone from eight-yards out to make it 14-0.

“We’ve been waiting a long time for this one,” said Arone. “This year, we came in confident and there was nothing on our minds besides us winning this game. We weren’t scared, we’re not scared of anyone this year. We’re a really competitive team and this one means a lot to the school and the whole town.”

The Hornets answered with an important 14-play drive of their own and a 1-yard touchdown run from Drew Sacco cut it to 14-7 at the half. Mansfield took the second half kick off and again put together a lengthy drive, chewing up the first 5:59 of the quarter, but had to settle for a James Gilleran field goal, cutting it to 14-10.

Franklin began its ensuing possession at the Panther three-yard line. The game soon turned into the Gula Show as Bain decided to hand it off to his bruising back 10 straight times. On the 11th play of the drive, Arone hit another play action pass, this time finding Will Tracey down the right sideline for a 41-yard touchdown and a 21-10 lead heading to the fourth.

“Mack’s a great player, everybody knows he’s getting the ball,” said Bain. “He’s going to get the ball 25, 30 times, how do you protect that? How do you keep them honest? Their safeties had to stay out of the box as much as they could, but eventually they had to come up and we just tried to time it right.”

Franklin gave the Hornets some life with 8:24 left in the game when Gula fumbled the ball as the Panthers were driving. Ryan DeGirolamo recovered at the Mansfield 24, but the Hornets ended up turning the ball over on downs as “Rattle City” was in full throat helping the defense out throughout the evening.

Five plays later, Arone hit Jonathan Martins on a quick little pop pass up the seam and Martins did the rest, rumbling 33-yards for the 28-10 lead with a little over three minutes left. After several snaps for Mansfield, the final whistle blew, the Panthers began to celebrate and the enormous student section tried to storm the field. Bain held them off as the teams went through their handshake line, so they decided to take a mini lap around the track decked out in their USA themed gear instead.

“We made sure we had a crowd for this one today,” Arone said of the college football-like atmosphere. “It was an awesome game, rivalry game, haven’t beaten them in (11), so we made sure we got everybody out and made sure everybody was loud tonight, it was awesome.”

As eyes start to focus on just how good this Franklin team might be, Bain wants his guys feeling like this just the beginning and not the peak point of the 2021 campaign.

“We love this win, but wins are not goals for us,” Bain said. “We don’t ever want to say we want to win X amount of games, we want to win this…our goals are day-to-day, competing at a high level. It’s understanding this is a big moment and don’t forget that, but reaching goals every day got us here and this is a great result that we get to enjoy.”