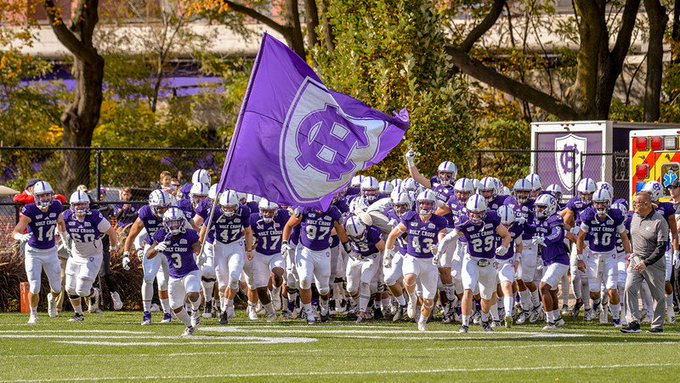 If the Yale victory didn’t impress you or the FCS voters, this one should have.

Holy Cross traveled to West Long Branch, New Jersey for a matchup with No. 20 Monmouth on Saturday and absolutely eviscerated the Hawks 45-15 in their home opener for a second straight win.

It appears the Merrimack loss was in fact a wake up call for the Crusaders (3-1) and unsurprisingly, head coach Bob Chesney was able to quickly get things back on track after that brutal game against the Warriors a few weeks ago. Holy Cross led 28-0 at the half in this one and made quite another loud statement that they should be back in the national rankings with a home matchup against Harvard – coming off a blowout win over Brown – on the docket next weekend.

On the ground, Peter Oliver (10/64/1), Jordan Forrest (5/44/1), Jordan Fuller (3/43/1) and a total of eight ball carries racked up 225 yards on 32 rushing attempts. Tenio Ayeni hauled in all five of his targets for 107 yards and two touchdowns to lead the receivers. Jalen Coker added six catches for 63 yards and a touchdown while nine different guys caught at least one pass.

Defensively, the Crusaders were simply dominant. Jacob Dobbs led the way with 11 tackles, three sacks and he was the recipient of Haughney’s push pass on the fake punt. Liam Anderson (six tackles) and Matt Cedeno (four tackles) each added sacks as well. As a unit, the Crusaders defense held the Hawks to1 254 yards of total offense, including just 133 yards through the air.

Not only was Saturday another statement day for Chesney and his program, but it was also a bit of a history-making win as Holy Cross handed Monmouth its first home loss since 2018, the Hawks had been 19-2 since opening Kessler Stadium in 2017. It was also only the second win in program history for HC over Monmouth.

Harvard will obviously present a much stiffer test at Fitton Field next weekend, but the Crusaders are back on track and seem poised to make quite a bit of noise in the FCS rankings if things continue moving in the right direction.

BC has the Hafley effect, but it’s hard to discount the Chesney effect over in Worcester right now.