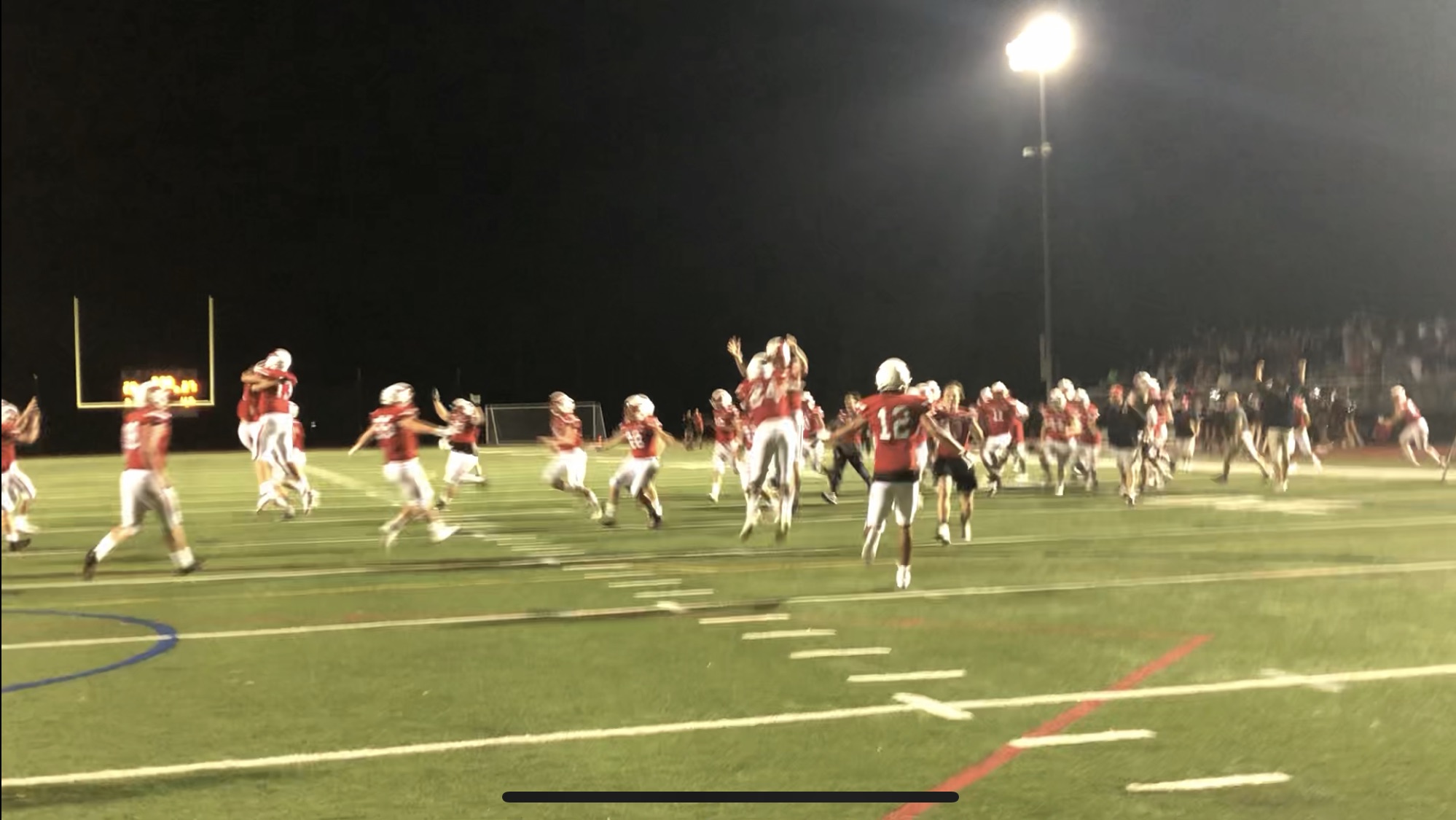 MILFORD – One play, no time left on the clock, game on the line. It’s a scenario every kid played through in their head in the backyard at some point.

With a rare opportunity to play on a Thursday night due to the forecast on Friday, Natick and Milford staged an instant classic in front of a raucous crowd that ultimately came down to one play with zeros on the clock.

After freshman quarterback Damon Taylor brought Natick within one point on the final play of the game with a controversial 1-yard touchdown run, the Redhawks decided to try and go for two-points for the win instead of taking the tie and heading to overtime. Milford’s Jaden Agnew broke up the ensuing pass, giving the Scarlet Hawks a wild 28-27 win in the New England Football Journal Game of the Week presented by Gold Athletics.

“Our kids showed they had heart, they had to dig in deep,” said Milford coach Dale Olson. “I didn’t have a timeout left…listen, that’s a great call by them at the end of the game…anytime you can beat a Natick team, come on. I don’t care if it’s 2-0, we just beat Natick.

“That’s something that Milford probably hasn’t done since they played back in the eighties. We didn’t play great tonight and we need to play better moving into the Hock and I think we will. We’ve got a great group of coaches and a great group of kids.”

Milford (3-0) was in complete control with the ball and a 28-21 lead with under two minutes to play, but Tyler Lane (29 carries, 154 yards, 2 TD’s) fumbled the ball while trying to run out the clock and the Redhakws’ Jake Adelmann recovered at the Milford 45 with 1:10 left.

“I talked about it (Wednesday night) on (the NEFJ Game of the Week Preview Show) we’re going to face adversity and we’ve got to control what we can control,” Lane said of his fumble. “That’s one thing I’ve got to control there and adversity faced, we bounced right back.”

Prior to the Natick touchdown to get within one, Taylor completed a pass to Drew Waldron at the Milford 1 on 4th-and-short. Waldron was able to step out of bounds with one second left, setting up the Taylor touchdown run and two point attempt. Taylor appeared to be tackled well short of the goal line, and on the play before it Milford coach Dale Olson was apoplectic that a flag wasn’t thrown for a pick play on the 4th-down conversion, but in the end his guys were able to get the game winning stop when it mattered most.

Natick (2-1) trailed 28-14 following a 15-yard touchdown run from Lane with 3:51 remaining. That score was set up by an Isaiah Pantalone interception and then an impressive catch and long run that included a highlight reel stiff arm from the junior, but the Redhawks refused to go away. Taylor hit Jayson Little for a 29-yard touchdown with 2:39 left to keep Natick in the game before they ended up getting the huge fumble recovery.

“They were as good as advertised and it was ugly early, but our guys hung tough and didn’t quit,” said Natick coach Mark Mortarelli. “A loss is a loss, there’s no moral victories but we have something to build on. I’m pleased with our leadership and our two young QB’s made some plays.”

Trailing 21-7 at the half, Natick got an interception from David Seiche early in the third to get some life in their fan section. The Redhawks were forced to punt, but Milford muffed it and Natick’s drive continued at its own 48. Four plays later, Adelmann scampered in from 35-yards out and the Redhawks cut it to 21-14 heading to the fourth.

Early on, Milford jumped out to a quick 14-0 lead on a 24-yard touchdown catch and run from Pantalone on 4th-and-5 and then a 6-yard touchdown run from Lane. After the Lane touchdown, Waldron brought the kickoff back 88-yards to the house, cutting it to 14-7.

The Scarlet Hawks went up 21-7 early in the second on a 16-yard touchdown pass from Evan Cornelius (8-for-15, 142 yards, 2 TD) to Nick Schuler on a perfectly executed slant.

It was a playoff atmosphere at Milford High School on Thursday night and if the football gods enjoyed the show as much as everyone in attendance, they’ll give all of us a rematch at some point in November or December.

“It definitely felt like a playoff game to us,” added Lane. “Thursday night, crowd was packed, that’s great to see. Not playing on Friday getting the weather tomorrow, it just felt great to feel that atmosphere. We definitely felt that down on the goal line on that last drive for Natick and we pulled it out.”