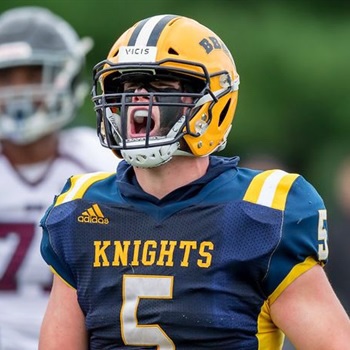 Tyler Martin leads a talented BB&N team ready to be one of the best in New England.

After not playing last season, the ISL is back. Some players in the league got to play in “The League” this past spring but this will be the first time in two years that the schools in ISL will go head to head. Ditto for many of the other private schools in New England.

Here is a look at all the teams in the league and some players to watch. We also preview many of the other private schools in the area as well.

Buckingham Browne and Nichols: Several key players return for Mike Willey’s Knights. Among them, Arizona commit Tyler Martin who is going to be a fifth year starter and Ronan Hanifan, one of the most highly recruited players in New England. The Knights will be good upfront with Nick Ciaffoni, and Thaddeus Foote leading the way. BB&N should score plenty of points. The defense, spearheaded by Martin should be stout.

Milton Academy has the talent to go toe to toe with BB&N. The Mustangs return 11 total starters and have added some talent in the off season.

Jacob Holtschlag Luke Thorbahn and Jackson Smith are one of the most talented backfields in the ISL and will be the focal of the offense. Tight end Andrew Rappleyea will be one of the best skill players in the ISL. He could be a real difference maker. The Mustangs also return an experienced offensive line led by Duncan MacDonald. MacDonald along with Jack Wilson and Dan Rosenberg will pave the way for what should a potent rushing attack.

You can never count out Belmont Hill. The Sextants return a talented offensive line led by Calogero LoGrasso and Jack Henderson and a strong skill group featuring quarterback Nick Caro and tight end Harry Lodge. Running backs Albert McField and Bert Greene will look to balance things out on the ground.

After struggling with numbers in 2019, Lawrence Academy is back and ready to be a factor in the ISL.

Coach Jason Swepson has a tremendous resume as a college coach and knows how to build a program. Swepson has gotten the numbers up and LA is ready to be competitive once again.

Quarterback Ryan Puglisi is going to be one of the best players in the league before the end of the season. He already has college offers most notably from Boston College.

Puglisi will have a terrific offensive line protecting him led by Notre Dame committ Ty Chan, Hollis Dirstine and Ryan O’Connor. Puglisi’s number one target will tight end Matt Ragan. Ragan is a Boston College commit. The Spartans have a lot of young skill talent that should develop this season.

St. Sebastian’s returns a bevy of talented players that will allow them to compete for an ISL title. Wide receivers Ben Frisoli and Cormac Wright are both difference makers in the passing game. Quarterback Braeden Donovan can get them the ball thanks to a veteran offensive line led by Captain Ryan Donovan. Defensively, the Arrows will once again lean on their front seven which is usually a strength of the team.

Nobles and Greenough will lean heavily on Yale commit Cam Charron . The two way lineman will be counted on to lead an offense that has good skill but needs to come together and develop. The wide receiver tandem of Matt Travisano and Joey Duggan will give opposing teams problems.

You can never count out Roxbury Latin. Spearheaded by a talented defense led by Luke DeVito and James Birch, the Foxes should be good on the defensive side of the ball. Aidan Brooks is a three year starter at quarterback. He’ll lead an offense that has some good skill. Namely wide receivers Chris Weitzel, Antonio Morales and Charlie Clough. Latin could surprise some teams this season based on what they have back.

Middlesex returns several key starters from their 2019 team. Quarterback Cam Fries and a talented corp of receivers led by Liam Connor, Nate Crozier and Eon Morrissey and Mark Conde make the Middlesex offense one of the most potent in the league.

Governors has a solid defense and a quarterback in Tristan Aboud who makes the skill players around him better. Gov’s is always one of the tougher teams to play against week in and week out.

St. Mark went winless in 2019 but there is a lot of returnees from that team most notably ATH Zaki Williams.

Brooks has a lot of experience back in quarterback Michael Wolfendale, wide receivers Rayden Waweru and Fru Nkimbeng. Offensive linemen Jack O’Brien leads an offensive line that needs to develop.

Per usual, Groton will fly under the radar but they return some key contributors from 2019. Quarterback Patrick Eldredge, tight end Henry Jamison and running back Chris Kadri are a good starting point in terms of a skill group.

Dexter Southfield has one of the top offensive lines in New England led by West Virginia commit Sully Weidman and Penn commit Netinho Olivieri. The two will lead a line that will pave the way for running backs Mason Hatfield and Derik Nelson.

The Brothers Okunlola, Samson OT/DT and Samuel,TE/DE lead a Thayer team that has potential but needs young players to step up.

Tabor, Rivers and St. Mark’s should all be more come competitive this season. All three schools have returning talent but need to bounce back after a year off.

St. George’s played a lot of young kids in 2019 and that should benefit them this season as they return a good group.

Pingree had a memorable season in 2019 and boasted one of the most explosive offenses in New England. The Highlanders return several key players from that team most notably lineman Nico Mangano and Jack Feeks.

In New Hampshire, the Tilton School is a program to watch. The backfield of quarterback Chase Brewster (UMass Commit) and Jackson Paradis (Buffalo commit) will be one of the best in the region.

Keep on an on Loomis-Chaffee in Connecticut. Coach Jeff Moore has assembled one of the most talented rosters in New England. He has a dozen players with offers. Quarterback Dante Reno and offensive tackle Olaus Alinen head line the group.