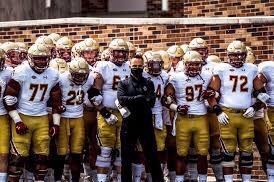 It’s been 34 years since an SEC team took the field at Alumni Stadium. Leading up to the game with Missouri on Saturday, there has suddenly become quite a bit of intrigue surrounding the game far beyond the novelty factor.

Any time an SEC team travels to the Northeast there’s going to be a big following and Alumni Stadium should be just about sold out, but there was no real juice or excitement for the game, other than the fact that Boston College has a chance to start 4-0 for the first time since 2007.

However, Tigers’ head coach Eliah Drinkwitz fanned the flames for this one with some unintentionally disparaging remarks about the BC program earlier in the week.

“If I had my pick of it, I would love to play a regional matchup that was maybe more of a rivalry game that would be a little more exciting for recruits to watch from a TV perspective,” he said, inferring that BC doesn’t draw attention nationally. That was proven to be very false last season as games against Notre Dame and Clemson drew viewership in the millions. “Maybe playing in front of your family…I don’t know the last time Missouri signed a kid from the great state of Massachusetts,” Drinkwitz added.

I asked Coach Hafley if he had any thoughts or rebuttal during Wednesday’s media availability and as he usually does, Hafley took the high road.

“I don’t think he meant anything by it and I’ll give you my opinion,” Hafley said. “Truthfully, you guys asked me how I felt when we had to go play Umass and when we had to go to Temple and play Temple. Shoot, if Colgate wanted us to go play them there, I would’ve gone there. If (Drinkwitz) didn’t want to come to Boston, he should have called me up and asked me and I would have gotten on a plane and flown to Missouri to play.

“I don’t care where we play, I don’t. The football season for me is about getting our team games and getting better every day and having a great time doing it with each other, so it is what it is.”

As if that wasn’t enough intrigue fr BC fans, the offense is still trying to figure out a way to get its passing game going after Dennis Grosel barely threw the ball in the 28-3 win over Temple. It was Grosel’s first start of the year and he believes just getting the first one out of the way will allow him to play a bit more freely this weekend.

“It just felt like we were back in rhythm again,” he said earlier in the week. “It felt like I was back as the starter, getting back into my rhythm…it felt good and now we’ve just got to keep trying to build on that from here on out.”

Offensive lineman Zion Johnson also spoke this week and talked about how BC is viewing this rare opportunity to play an SEC team in front of a full house.

“It’s always great when you get to play a team out of conference you don’t normally get to play,” he said. “We’re excited. I don’t know the last time when BC played an SEC opponent but it’s a great opportunity, We just want to go out there and play our game and hopefully come out with a win. We want to approach every game like we’re playing the No. 1 team in the country. Every game so far we’ve had that approach and we have that same approach this week.”

There was the obvious “first time in a long time” factor heading into this game that was going to draw plenty of fans, but with the questions surrounding BC’s offense and this new found hatred of the Tigers, Alumni Stadium should suddenly be an electric atmosphere at noon on Saturday.