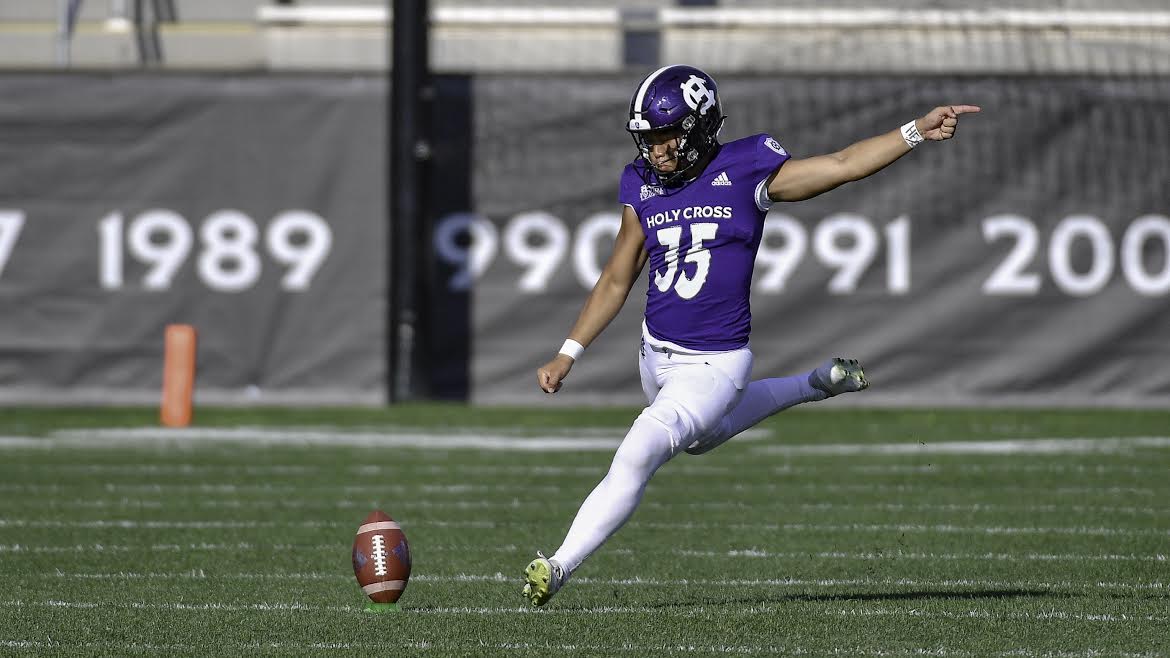 In 2014, Derek Ng walked into the football coach’s office at Bishop Gorman High School in Las Vegas, Nevada. The Gaels were fresh off their first-ever national championship.

“Walking into the coach’s office to basically say, ‘hey, I wanna tryout to be your kicker,’ they kinda laughed me off,” said Ng, a senior at Holy Cross.

“I was 5-foot-7 135-pounds. They thought it was a joke because they just won a national championship and now everyone wants to join the team.”

The former soccer player with a big leg was sent to junior varsity with a warning. While sitting on the bench, if he screwed up, missed a practice or lift, he was done. So, Ng never missed a thing and finally got the chance to show off for varsity coach Kenny Sanchez in practice. Not a single kick went wide, and the Nevada native was called up.

The result? An undersized kid who was taken as a joke was named first team All-Southwest Region, a two-time second team selection, and first team All-State. Along the way, he brought Bishop Gorman three-straight state championships and two more national titles as he made 16 of 21 field goals and 230 of 242 extra points.

Then, Ng took it even further, becoming the top kicker for Division I College of the Holy Cross.

“When you think kickers, work ethic probably doesn’t come to mind. It’s one of Derek’s biggest strengths. He does it 365 days a year, it’s not like he shows up first day and just kicks,” said Drew Canan, the Crusaders special teams coordinator. “It doesn’t surprise me at all that people doubted him. I’d never underestimate Derek when it comes to anything in life.”

As a freshman in 2018, Ng finished with a .970 extra point percentage, which stood for the 10th-best single season mark in school history. He also downed a 45-yard overtime winning field goal against Yale University (sound familiar?) that earned him Holy Cross’ top Moment of the Year. The next season, he led Holy Cross in scoring.

Following an All-Patriot League first team junior season that featured him breaking the Crusaders field goal record with a 51-yard bomb, Ng hasn’t slowed down a bit this year as a senior. At the Yale Bowl on Saturday, Sept. 18, the kicker gave the Bulldogs flashbacks as he nailed a 47-yarder with 48 seconds left in the fourth quarter to down Yale 20-17.

“We have the utmost confidence. He’s proven it in games and in practice. When he goes out for a 50-yarder, we expect it to go through the uprights,” Canan said. “He’s such a weapon for us. When it comes to pressure, I don’t think he feels a thing at all.”

“It’s a cool breeze sensation that comes over you. All you’ve gotta execute is two steps and a kick,” Ng added. “It’s such a great feeling when you hit the ball solid in a game. You have to do it to experience it.”

From a junior varsity bench player to one of the top kickers in the Patriot League Conference, Ng has beaten the odds. And his family has been on his side the whole way. Derek’s father Anthony and mother Amy both played volleyball at the University of California-Davis and his sister Lynsey took the soccer field at Iowa State University.

Safe to say, someone was always trying to win in the Ng house.

“Everything is a competition from running down the stairs, to racing to the car. Even now still, none of us live together, and every time we come together, it’s a race to see who can eat the fastest,” Derek said. “It’s always, ‘I win, I win, you lose,’ and I think it’s great. At Gorman I had to pass up two kickers, here I had to pass up two kickers. The competition just drove me.”

With his team sitting at 2-1 on the early season, Derek Ng is going to keep doing what he’s always done since being laughed off for his size.

Kicking to the top.