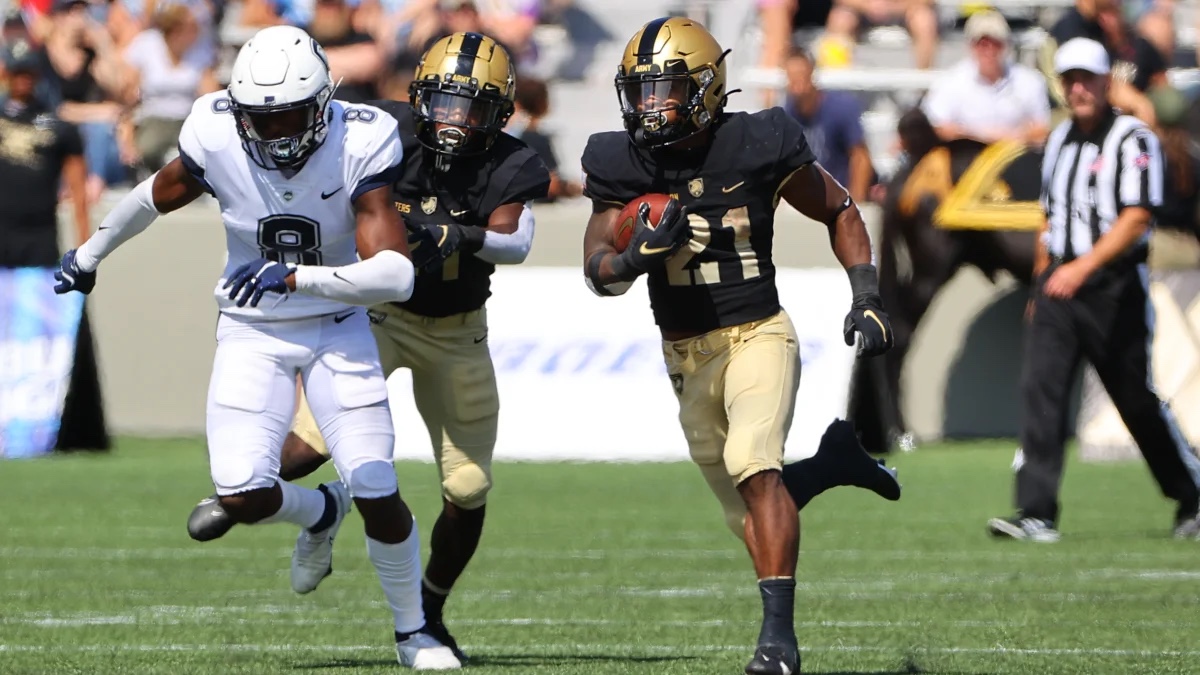 Army ran through and around UConn on Saturday.

Week three featured some great games and there were a couple of blow outs. The Ivy League also season kicked off as well. Some schools showed some rust after not playing the last two years while other did not.

Here are my thoughts on the week that was in Division One New England College Football.

1. Harvard didn’t skip a beat in their 44-9 win over Georgetown. The Crimson were clicking on all cylinders on offense and cruised to victory.

2. Dartmouth beat a Valpo team that was much better than a lot of people thought. Buddy Teevens team is young and their inexperience showed at times.

3. We said last week to not doubt Bob Chesney’s Crusaders. That they would bounce back after losing to Merrimack. Well, they did. Holy Cross picked up a huge 20-17 win over a Yale team that looked out of sync at times. It was Holy Cross’ second straight win over the Bulldogs.

4. Bryant hung with Akron for four quarters but ultimately lost 35-14. The Bulldogs played tough but wore down physically by the fourth quarter.

5. Slow starts have doomed UMass this season and this past weekend was no different in a 42-28 loss to Eastern Michigan. Depth issues also hurt the Minutemen. They were down a lot of people upfront and it showed in key situations in the game.

6. Another week, another ugly loss for UConn at Army. The Huskies fell behind 42-0 in the first half en route to 52-21 loss. Lou Spanos and his staff are trying to get this program pointed in the right direction. The talent isn’t there and quite frankly, neither is the support.

7. Maine picked up their first win of the season 31-26 over a Merrimack team that has been outstanding thus far this season. Nick Charlton’s Black Bears earned the hard fought victory. There is no such thing as a moral victory but Dan Curran’s Warriors are proving they can play with anyone in the area.

8. Quarterback Kasim Hill might have become a household name after his performance on Saturday in URI’s 45-24 win over Brown. Hill racked up 351 yards of total offense and led the Rams to their third straight Governor’s Cup victory over the Bears.

9. Let’s face it. The Boston College offense isn’t the same without Phil Jurkovec. I know Dennis Grosel has starting experience but as we saw on Saturday, the Eagles aren’t as dynamic or explosive. It will take Grosel time to get into a rhythm as a starter.

10. Central Connecticut State got a pretty good taste of the difference in game speed this week in their 56-10 loss to the Lions. SE Louisiana quarterback Cole Kelley threw for 444 yards and 4 touchdown passes. The Blue Devils just didn’t match up.

11. UNH won a hard fought 19-13 win over Lafayette on Saturday. The Wildcats had to earn it as the Leopards defense stifled the offense most of the afternoon. It was the defense that carried the say once again for the Wildcats. UNH faces a stiff test this week when they travel to Pitt.

12. Sacred Heart bounced back with a 21-7 win over Morgan State. The Pioneers won the old fashion or the way they’re used to winning. A strong running game and stout defense.