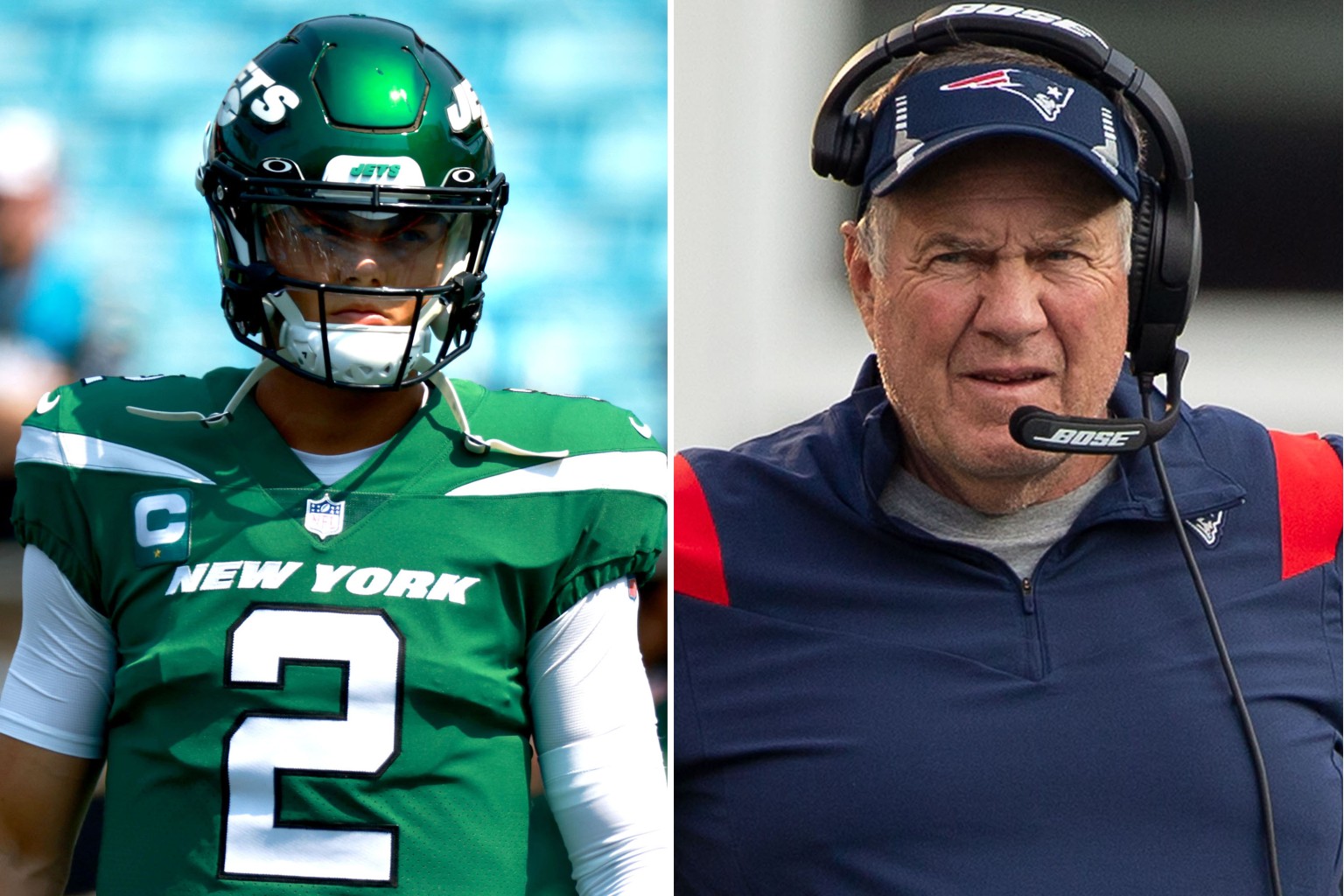 Week 2 is on the horizon and we have a matchup of AFC East rivals on Sunday. Both the Patriots and Jets are 0-1 after losses to the Dolphins and Panthers respectively. They’ll be clashing in East Rutherford this Sunday looking for their first win.

Lets break down the matchups.

Mac Jones had a great debut in Foxboro on Sunday, going 29 for 39 for 281 yards and a touchdown on his way to a quarterback rating of 102.6. He faced a tough Miami defense and while he didn’t push the ball down the field a ton, he was extremely efficient on short to intermediate throws all game. Free agent addition Nelson Agholor played a good game tallying 5 receptions for 72 yards and a touchdown. The future is bright, yet again, in New England

It was a tale of two halves for the Jets on every side of the ball Sunday against the Panthers. However, New York only gave up 19 points to their old quarterback Sam Darnold and a good supporting cast. Christian McCaffery tore the Jets apart, rushing for 98 yards and tacking on 9 receptions for 89 yards through the air. The worry was the Jets corners who are all 4th round picks or later, but they played surprisingly well, only allowing 160 yards all day to wide receivers. It is a young defense for New York but one that is invigorated by youth and passionate coaching from newcomer Robert Saleh.

Jones and the Patriots were efficient through the air on Sunday but the offensive line was inconsistent, allowing 8 QB hits and 16 total pressures. Not apocalyptic numbers, but the Jets’ defensive line is the strength of their defense so they’ll do everything they can to get to Mac Jones. Jones was able to spread the ball around against Miami, targeting 8 different receivers throughout the game. The Patriots should be able to carve up the short and intermediate area again against the Jets if they utilize their running backs and tight ends wisely. The Patriots’ receivers don’t scare me but they have enough outside of that position to make up for it.

The Jets’ defense was better than expected on Sunday, only allowing 19 points, a mere 3 of those coming in the second half. They tackled exceptionally well, giving up a lot of yardage to Christian McCaffery but not letting him break off any huge runs. The Jets are the youngest team in the NFL. It certainly shows on defense as they are starting 2 rookie corners and a rookie outside linebacker, all taken past the 4th round. They let up a deep shot to Robby Anderson for a 57 yard touchdown, highlighting their Achilles heel, which is the safety position outside of Marcus Maye. Anchored by the defensive line, their only chance is forcing Jones to evade pressure and make mistakes.

I give an advantage here to Mac Jones and the Patriots. The Jets are young and athletic on defense but McDaniels will exploit the soft spots that will inevitably pop up as the game goes on.

New England’s run game was working on Sunday, as they rushed for 125 total yards behind their hogs. Damien Harris looked fantastic while rushing for 100 total yards and 4.3 yards per carry. Harris and rookie Rhamondre Stevenson both had costly fumbles down the stretch that contributed heavily to the Patriots loss. The offensive line was opening up holes at a high rate against a solid Miami defensive front which should give Pats fans confidence for the offense moving forward. However, I must note it was a revolving door at right tackle Sunday, with Justin Herron, Trent Brown and Yasir Durant all getting snaps at that spot. Brown is still on the injury report as of Thursday, so keep an eye on that right side up front.

The New York Jets’ defensive strength is far and away their defensive line. Their marquee free agent signing Carl Lawson was lost to a torn achilles before the season started, but they still have a ton of talent on the line including John Franklin-Myers, Quinnen Williams, Sheldon Rankins and Foley Fatukasi. Fatukasi has been one of the highest graded run defenders over the last 2 years and Quinnen Williams has been ascending star since the beginning of last year. They’ll need to hang tough against a phenomenal Patriots run game if they want a chance.

This one is closer than most areas, but I still give the advantage to New England. They used 12 personnel on almost half of their offensive snaps last week and I expect that to be even higher on Sunday.

The New York Jets and an exciting offense go together like peanut butter and mayo. But this is not Adam Gase’s Jets. Rookie Zach Wilson had a slow start last week to say the least as the Jets offense DID look like Gase’s Jets in the first half. Wilson led the Jets back from a 16-0 deficit at half, throwing for 2 touchdowns and a 2 point conversion in the final 2 quarters. He finished 20 of 37 for 258 yards, 2 touchdowns and an interception. The offensive line was very ugly, giving up six sacks by the days end.

The Patriots’ defense played very well on Sunday, tallying 2 sacks and an interception against Tua Tagovailoa. They made Tua uncomfortable all day and forced a turnover at the perfect time, giving their team a chance to win. Their run defense was stout most of the game, letting up only 69 rushing yards to running backs. The secondary was relatively solid, but Devante Parker and Jaylen Waddle were able to get open consistently, totaling 142 yards between the two of them. They’ll look to bounce back against an inexperienced Jets offense on Sunday.

The Jets’ chances in this game will hinge entirely on their offensive line, now without their mammoth left tackle Mekhi Becton for a couple months. Zach Wilson was sacked 6 times on Sunday and was pressured on OVER 50% of his dropbacks. It was the line’s first time playing together in a new scheme and some issues were communication, but Belichick will destroy them if they don’t figure it out. Wilson has a live arm and unteachable escapability and he showcased it in the second half on Sunday. He can absolutely rip the football as evidenced by some big time throws to receiver Corey Davis who totaled 5 catches for 97 yards and 2 touchdowns. The Jets also will have receivers Keelan Cole and Jamison Crowder back this week which will be a nice safety blanket as we know Bill loves to take away opposing QB’s favorite target. Watch out for rookie Elijah Moore as the wild card this week.

The Patriots defense racked up 9 QB hurries and 2 QB hits to go along with their 2 sacks on Tagovailoa. The pass rush was the driving factor that caused their sole interception, along with Tua’s puzzling decision to throw a pop up into double coverage. The Patriots’ corners had trouble sticking with Miami’s receivers consistently, which brings up an interesting part of the matchup on Sunday. The Jets have the best receiving corps they’ve had since Brandon Marshall and Eric Decker were in town, so they’ll look to take advantage of potential mismatches in man to man coverage on the outside.

IF, and it is a big IF, New York’s offensive line can give Wilson time to throw, the Jets may be able to make some noise through the air. I can see Wilson being aggressive and throwing an interception or two, but he is confident as Hell. Belichick will run disguised stunts and blitzes but Wilson is more equipped to handle this defense than any Jets QB I’ve seen in my lifetime. Call me crazy or a homer, but the Jets receivers against a Stephon Gilmore-less Patriots make the difference here for me.

The Jets’ run game was nowhere to be found on Sunday. They had 45 total rushing yards on 16 attempts, a measly 2.8 yards per carry. If the Jets’ offense is going to do anything this week, the run game needs to significantly improve. They have talent in the backfield but holes were non-existent against the Panthers. They had more success running behind newly acquired tackle Morgan Moses once Becton went out, so look for that to be a feature Sunday afternoon. The Jets’ scheme is a Shanahan one and will rely heavily on play action if it is going to function correctly. The Jets will need much more out of the run game Sunday in order to compete.

The Patriots’ defense against the run is always tough. They contained Miami’s backfield on Sunday and will look to do the same to the Jets this week. The Dolphins did have some success running down the middle on certain drives, but the Jets can hardly take advantage of that with their below average center and guard play. The Jets will need to get creative and run out of some wide sets to avoid putting their disaster of a tight end room on the field. That also will spread the Patriots’ defense out, giving them a numbers advantage in the box.

The Jets have not shown me they can consistently move people downhill and I think the Patriots will look to stifle the rushing attack as a priority. I don’t think they’ll have much trouble with that on Sunday.

Top to bottom, this Patriots team is significantly better than the Jets. Their roster is built to win now and the Jets are the youngest team in the NFL with an average age of 25.1. These are two teams who are just at different stages of building a winner.

I do think the Jets will play better than many expect, but a lot of that comes from the fact that no one ever expects anything out of the Jets. And rightfully so. The Patriots’ injuries at a few key positions could loom large. I see the Patriots’ offense handling this game by running the ball until they’re blue in the face and giving Mac more easy throws to get into rhythm. It would not surprise me to see them let Mac uncork a few deep balls against this young Jets secondary. I think Wilson plays well but is under pressure a lot yet again. Look for him to have a few “wow” throws but an interception or two by the end of the game.

Patriot’s win their first game of the season and Mac Jones shines bright.