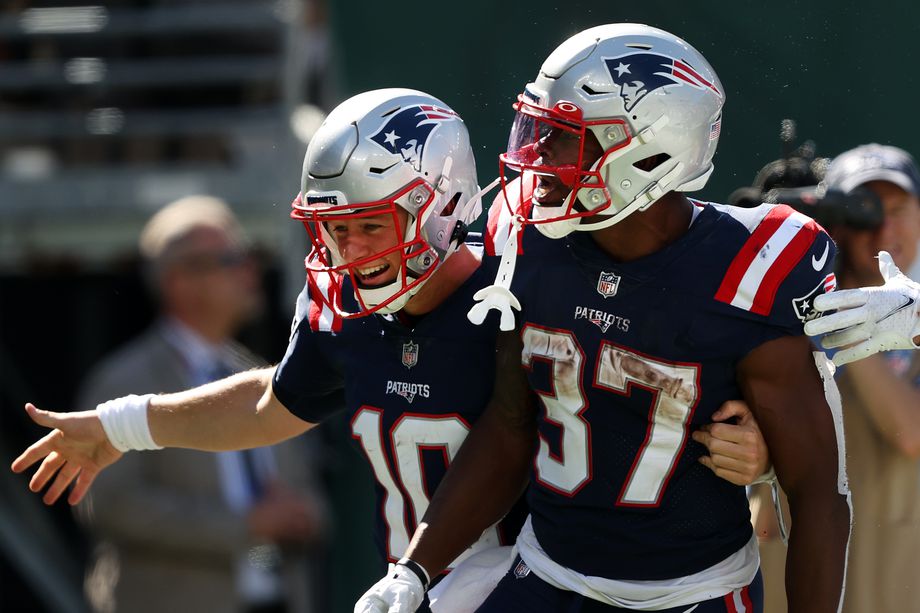 
Mac Jones has his first of (hopefully) many NFL wins, but Sunday was all about the defense.

The Patriots offense contuined to struggle in the red zone and it appears the coaching staff hasn’t quite taken the reins off of Jones yet, but the defense intercepted Jets rookie quarterback Zach Wilson four times and sacked him four times in a 25-6 win. Nick Folk also made four field goals and has now hit 33 straight, a franchise record.

New England (1-1) was actually outgained on offense (336-260) and gave up 152 yards on the ground, but it was the Patriots’ ability to take advantage of some horrendous decisions by Wilson on defense and do enough on offense that allowed them to grind out a division win on the road.

“Proud of our football team today. I thought these guys came back and really worked hard all week, and I thought we made some improvement from what we did last week,” said head coach Vill Belichick. “Still obviously have a way to go, a lot of things we can do better, but I thought we did a lot of things better than we did them last week. So, we just need to keep grinding, keep working, just keep stringing these days and weeks together and keep improving our football team.”

After punting on its opening possession, New England got the ball back one play later when JC Jackson came up with his first of two interceptions on the day with an assist going to Devin McCourty. The Patriots offense managed just seven yards over the next six plays and settled for a Folk field goal from 46-yards out.

Jake Bailey pushed the kick off out of bounds, but Zach Wilson’s second pass attempt was also picked off two plays into the next drive, this time by Adrian Philips at the New England 28. James White scored moments later on a 7-yard TD run and the Pats led 10-0 heading to the second.

Both teams kicked field goals in a sloppy second quarter, giving the Patriots a 13-3 lead at the half. Devin McCourty had the fourth interception of the afternoon for the defense less than four minutes into the third quarter and Damien Harris (16/62/1) went into “beast mode” two plays later, bouncing off seven or eight Jet defenders before finishing a 26-yard touchdown run to make it 19-3 after Folk missed the PAT.

The entire offensive line and even Jones helped push the pile into the end zone in what might be one of the best plays of the season for this offense when it’s all said and done.

“(I was) very determined, obviously,” Harris said. “Anytime you touch the ball, you want to get it in the (end zone). It was a great play. Everybody was blocking their butts off. I got a lot of help from a lot of guys. Apparently, I got some help from Mac Jones, too. I’ll have to watch the film to see that. It was a great play. It was just great to have that moment with the team. Everyone was feeling the energy. Everybody was excited, so it was truly a great moment.”

“Yeah, I think we wanted to score,” added Jones. “Everybody was down there pushing, and my job is to make sure nothing bad happens and try to be by the ball, but maybe I should just stay back (laughs). At the end of the day, just trying to get the touchdown. The offensive line created the holes and Damien made a guy miss and I kind of carried out my fake, and there he goes, kind of shot-out the back door and I was like, ‘All right, here we go.’ So, he did a good job getting it in. I thought we ran the ball hard and made improvements there.”

Folk added another field goal in the third to make it 22-3 heading to the fourth. The Jets had a 5:01 drive that ended in a fairly useless field goal with a little over six minutes to play making it 22-6 and Folk capped the scoring with one final field goal at the two minute warning.

Jones finished the day with just 186 yards on 22-of-30 passing, but he didn’t turn the ball over. White was also a key contributor with 45 yards receiving which led the team. Jakobi Meyers and Jonnu Smith each had four catches and seven different guys caught at least one ball.

It may not have been aesthetically pleasing, but a win is a win at this point for a team with a rookie quarterback and several new faces on both sides of the ball. It may be hard to watch this brand of football for a little while, but if it keeps producing results Patriots fans will learn to live with it.

“I’m proud of our team, I’m proud of the way they worked this week and bounced back,” added Belichick. “We have a big challenge on our hand next week with the Saints, but we’ll enjoy this one for a little while and turn the page and move on.”