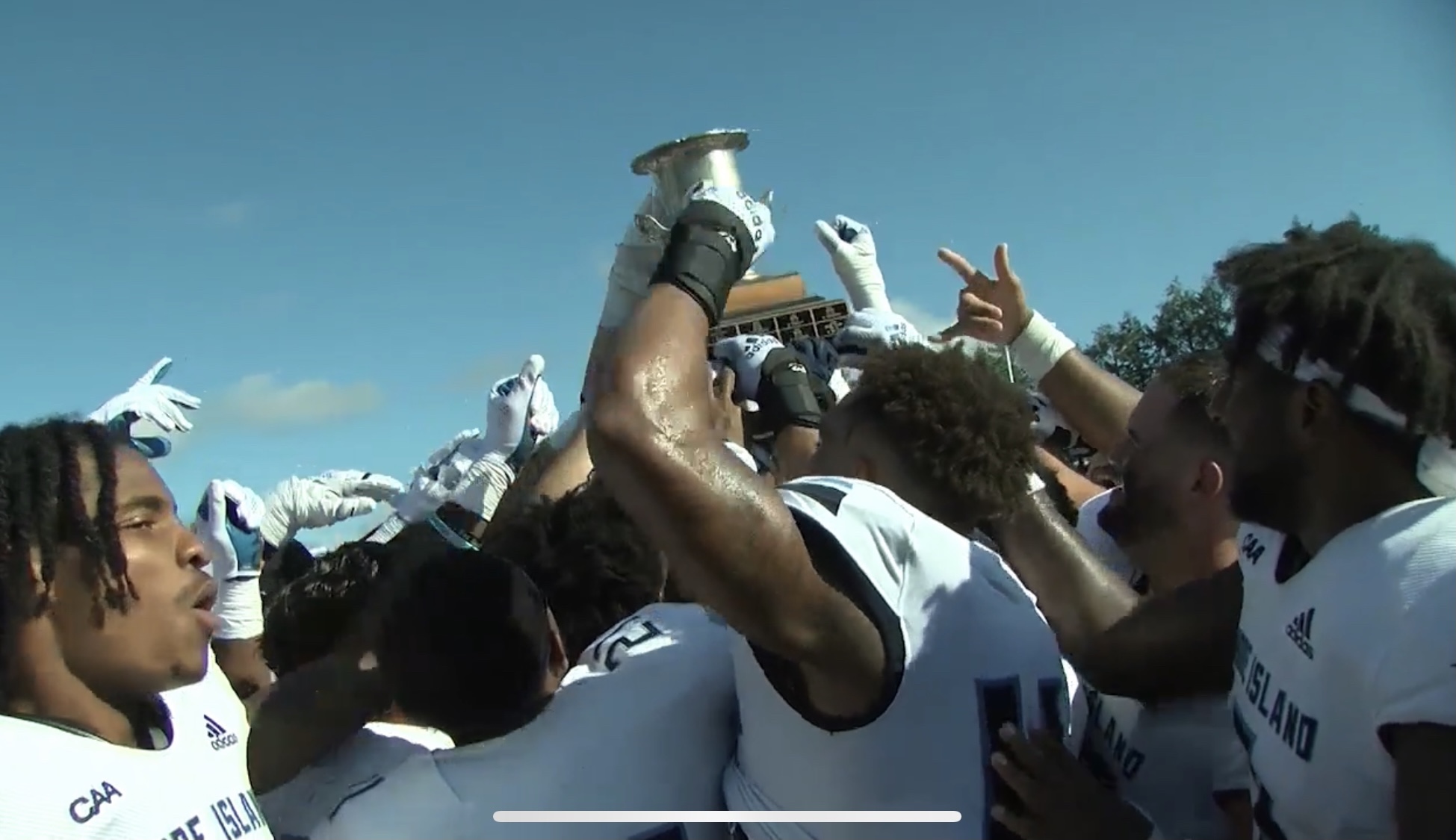 After not playing for over 500 days, the Bears got off to a good start by forcing a three and out and scoring on their opening possession on an E.J Perry (38-62, 2 TD’s, 2 INT’s) to Hayes Sutton 14 yard touchdown pass. It would be the only time the Rams trailed all afternoon.

On the ensuing possession, the Rams tied the game on a Kasim Hill (13-19, 321, 3 TS’s) to Justice Antrum 35 yard touchdown pass. Hill played lights out despite rotating for much of the first half with Brandon Robinson. Many came to see E.J Perry and they discovered how good a player Hill is.

To Hill, his career day was all about executing the game plan.

“As an offense, we played within ourselves and executed the game plan. We let the coaches coach us. We got into rhythm there in the first quarter and got the ball in the hands of our playmakers. They had a great, the O-Line had a great day.

One of the playmakers who had a great day was junior tight end Caleb Warren who caught five passes for 106 yards and a touchdown. Brown had a difficult time defending the move tight end. Warren downplayed his involvement but he made several big catches in the game.

“I wasn’t focused on stats. I just wanted to come out here and give my all. I’m blessed that Kasim got me the ball and I did what I did.”

Despite the performances of Hill and Warren, Brown was able to hang around in the first half and only trailed 17-14 at the break.

Things fell apart for the Bears in the third quarter. Miscues and giving up big plays did them in. Brown found them in a hole when the Rams scored 21 unanswered points to break the game open. The long lay off finally caught up with the Bears in the second half. Head Coach James Perry summed it up best when describing this tale of two halves for his team.

“There was no rust on our energy,” Perry said. “I was very happy with the sideline and when we came out of that locker room. Execution when the bullets are flying is difficult.”

The Rams of course played three games in the spring and they had two games under their belt going into this game. They were in better game shape and it was most evident on Jordan Jones’ 100 yard interception return for a touchdown. Despite that, Perry was proud of his team’s effort.

“When that went back for a pick six at the end, our guys weren’t feeling it hard, our guys are great. I think we’ve been through enough the last couple of years that bouncing back from a deficit is something we’re very capable of. So I was really proud of them. I was proud of their effort all day.”

Perry acknowledged that they need to clean up their mistakes and they only have six days to do it before they play at Harvard next Friday night. The Crimson opened their season with a 44-9 win at Georgetown.

As for the Rams, they have a bye next week so they will have extra time to enjoy this win and what it means.

Warren summed up best how the team feels going into their bye week.

One thing you notice about this Rams team is that they playing together. They have a special bond and that bond could pay dividends down the road.

“They like each other,” said Rams Coach Jim Fleming about his team. “They feel good about each other. It’s a very strong team. We know that we’ll get prepared for Stony Brook and whatever is after that.”

Rams get the Governors Cup from Governor Dan McKee. pic.twitter.com/jv6nXBAGfa

For now, the Rams can savor being called state champs for the 2021 season. They earned it.