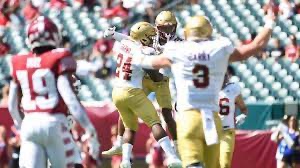 When we all look back at the 2021 Boston College football season, the September 18th game against Temple probably won’t lead the highlight reel on the ACC championship DVD.

Still, the Owls were on the schedule and the Eagles needed to check another one off before the “real” games against Missouri and Clemson unofficially “start” the season. BC took care of business in Philadelphia, winning 28-3 and more importantly they got to 3-0 on the year.

Mizzou visits next Saturday before the Eagles head to Death Valley for what now appears to be a winnable game on October 5th.

Leading the defensive effort was former Owl Isaiah Graham-Mobley. Mobley had eight tackles (six solo) while Khris Banks – another former Temple guy – had five tackles. As a unit, BC gave up just 239 yards of total offense and had four sacks. The offense was held to just 221 as Dennis Grosel threw for 34 yards but he did run and throw for a touchdown. The running game was a huge factor for the second straight week as Pat Garwo enjoyed his homecoming with 59 yards on 16 carries and a touchdown.

“It felt real good, real exciting,” Banks said. “The atmosphere of the Linc, playing in an NFL stadium, it’s always a great experience and the best feeling a kid could ever have.”

BC led 14-0 after one and 21-0 at the half. The Eagles were up 7-0 less than two minutes in after a long Travis Levy kickoff return eventually set up a Grosel 19-yard pass to Jaden Williams and freshman Conor Lytton added the PAT. A 1-yard TD run from Garwo made it 14-0 in the final minute of the quarter. Levy (3 carries, 10 yards) punched in a short two-yard touchdown run with 48 seconds left in the half for the 21-point cushion at the break.

Rory Bell had Temple’s only points on a 32-yard field goal early in the fourth, but the day belonged to the defense. Grosel added a two-yard touchdown run with 4:14 remaining to cap the scoring. Most importantly, the Eagles were able to finish the game out on their terms running the ball. As a team, BC managed to rack up 187 yards on the ground. Garwo, Zay Flowers (1 carry for 47 yards), Grosel (47 yards) and Alec Sinkfield (6 carries for 35 yards) all played a part in making Grosel’s day that much easier.

It may not have been pretty again, but BC is 3-0, heading home for another winnable matchup with Missouri and all signs are still pointing to this being a special season if the defense can continue putting up efforts like the one displayed on Saturday. The offense will come around, but for now, Eagles fans should still keep an eye on flights to Charlotte in December.

“It was his first start, I think that’s what everyone needs to realize,” Hafley said of Grosel. “It’s different when you come in but he’s the starter now and he’s going to be…he’s going to get better and better. It’s his first start of the year and I’m proud of him. I think Pat did a good job and we set the tone and wore them out a little bit in the first half and then it was cool to see Sink come in with a ton of juice and kind of finish them off at the end of the game.

“I thought both backs played well, I thought the O-line played well…we wanted to end the game by running the football and finishing them off and they did. Really, a nice team victory today.”