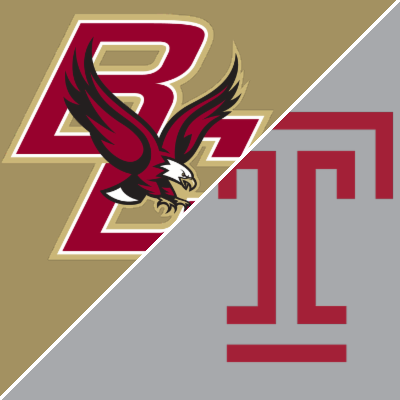 The Dennis Grosel Era begins (again) on Saturday as the Eagles look to go 3-0 in Philadelphia.

Perhaps more so than any other team in the country, Boston College is more equipped to have its backup quarterback lead the way for the rest of the season since he’s already been there and done it several times in his career.

1. Keep it simple – The offense isn’t going to run the exact same way it did with Phil Jurkovec under center, but it really shouldn’t change all that much either. With so much talent at receiver and Trae Barry at tight end, it feels like the Eagles can keep the offense simple in this one, let Grosel get in a bit of a rhythm and then get out of there in less than three hours with a win.

2. Run the ball again – Pat Garwo had a career day last week against UMass and this is a day where we should see him, Alec Sinkfield and Travis Levy getting a TON of work today. No need to blow Temple out 55-0, a nice little tidy 24-7ish win would be just fine.

3. STAY HEALTHY – Losing Phil was worst case scenario this early in the year, but if Zay Flowers – who gave everyone a scare last week – Barry, really any of the offensive linemen or backs get hurt then any hopes that still remain for a special season might disappear. With Missouri and Clemson on the schedule the next two weeks, this is your ultimate get a win and get the hell out kind of game./

Three defensive keys for BC:

1. Let the Philly kids have a field day – Isaiah Graham Mobley and Khris Banks are returning to some familiarity this weekend as Philly/Temple guys and I expect both of them to have an impact. BC is still a bit beat up on that side of the ball and the continuous rotation at multiple positions should give both guys ample opportunities to make some big plays and memories in front of their friends and families.

2. Stop the run and don’t give up big plays – Again, it’s the most cliche thing in football, but if Temple is able to control the clock on the ground then they have a chance to scare BC a bit. If not, then the Owls might be in for a longgg day. UMass was able to get some chunk plays against the BC defense last week too, I’d like to see this be as close to a shut-down performance as possible.

3. STAY HEALTHY – It’s tough to have repeat keys to the game on offense and defense, but after Phil’s injury last week it can’t be overstated how important it is for the Eagles to get out of this one unscathed with their two biggest games of the season coming up. Everything stated above applies on the defensive side of the ball too.

Dennis Grosel is arguably the best and most experienced back up in the country. Even if it doesn’t always look crisp at times today, there’s simply too much talent around him for the Eagles to be stifled by Temple. Defensively, I’m curious to see how they correct mistakes from last week. It’s another stiff but very passable test for BC this weekend and I believe they’ll win this one fairly easily. BC will also have at least one offensive, defensive and special teams touchdown today too.