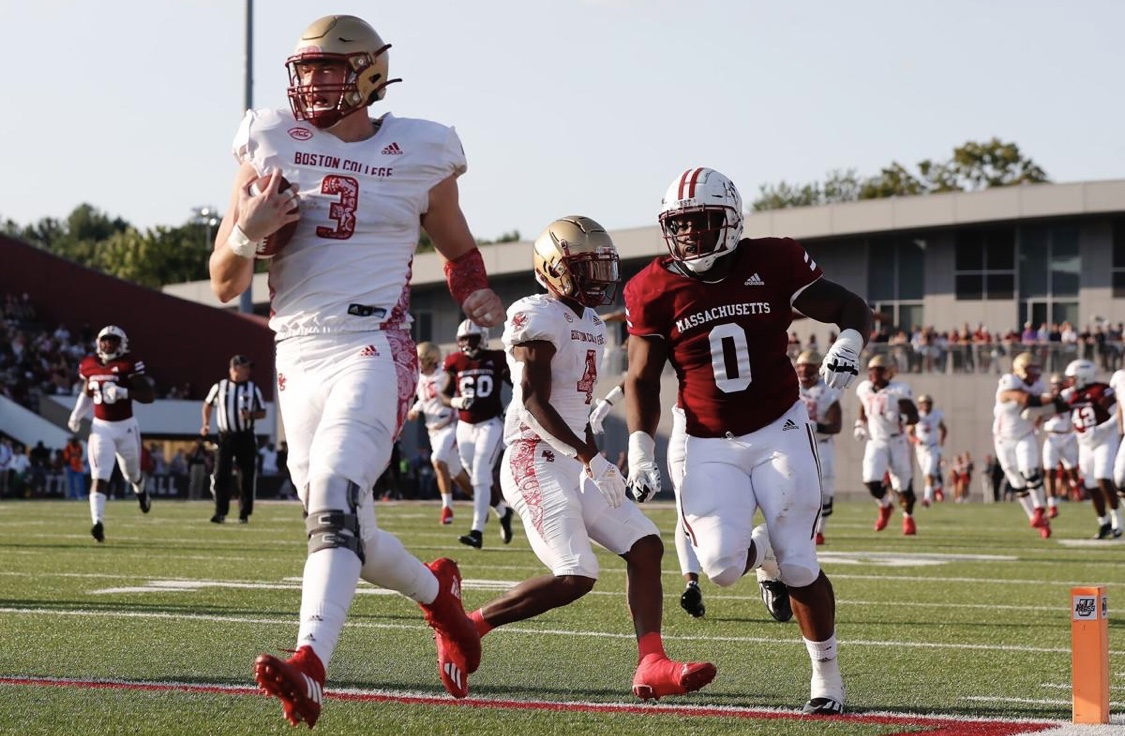 Boston College ran past UMass on Saturday in a competitive game. (Photo courtesy of Michael Dwyer.)

Week two featured a tighter than expected game between Boston College and UMass and an upset when Merrimack beat Holy Cross. Here are my thoughts in the weekend that was in college football in New England.

1. No one thought UMass would hang with Boston College. While you never got the sense the Minutemen could win the game, Walt Bell’s squad found a way to keep it close and make the game competitive.

2. Phil Jurkovec’s wrist injury appears to be season ending after he had surgery on Monday to repair it. If it is in fact a season ending injury, at least the Eagles are in good hands with Dennis Grosel. Don’t get me wrong, losing Jurkovec is a crushing blow for a team that had aspirations of competing for an ACC Atlantic title but at least Grosel has starting experience.

3. It’s a good thing Boston College pounded the ball against UMass. Pat Garwo rushed for 160 yards. The Eagles are going to need this backfield to carry more of the load moving forward. A balanced ground fans will take pressure off of Grosel.

4. Walt Bell has a legitimate decision to make at quarterback after Brady Olson’s performance on Saturday against the Eagles. The true freshmen went 14 of 29 for 214 yards and three touchdown passes. He did throw two interceptions but he played very well considering he was playing high school football six months earlier.

5. Who had Merrimack upsetting #24 Holy Cross? I would probably say not many people did but the Warriors win is proof that the talent divide between NEC schools and the Patriot League isn’t that wide.

6. Sacred Heart was the preseason favorite in the NEC but they ran into a Bryant team that had a lot to prove after playing URI the previous week. The Bulldogs defense was dominate. It helped that running back Julius Chestnut did not play so that made it easier but it doesn’t take away from a great performance nonetheless.

7. Coach Mac earned his 100th career win as UNH head coach in the Wildcats 26-14 win over Towson. The Cats are off to a 2-0 start and are ranked in the FCS Top 25 coming at number 23. They face Lafayette this week.

8. Coby Tippett may end up being one of the most impactful transfers in all of college football when it is said and done this season. He had a punt return in the Rams win at Albany on Saturday night and made several key plays on defense. The Rams travel to Providence on Saturday to take on Brown for the Governors Cup.

9. After battling Delaware for four quarters in the season opener, the Maine Black Bears were overwhelmed by James Madison 55-7. It has to be a disappointing loss for Coach Nick Charlton and his staff because they know their team is better than that.