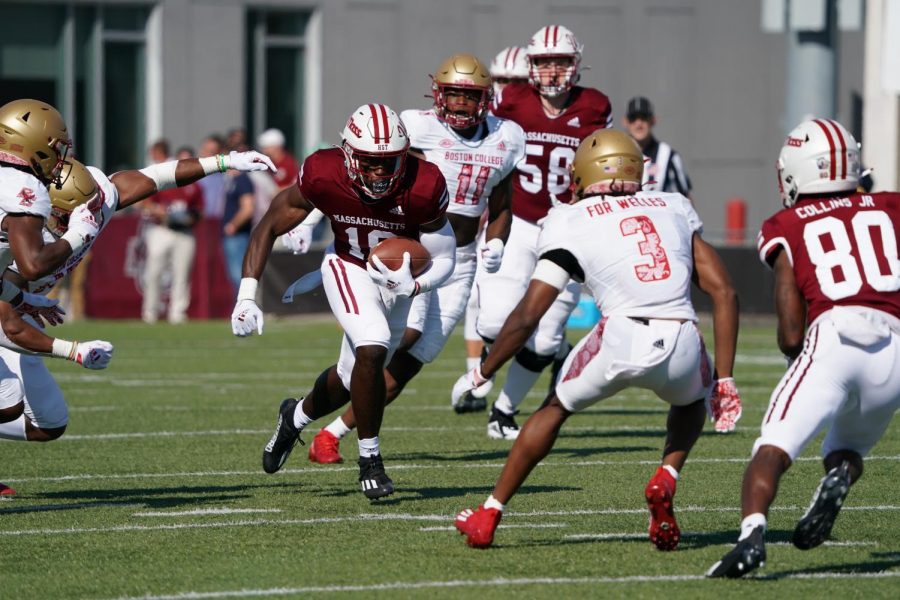 AMHERST-It was supposed to be a blow Saturday afternoon at McGuirk Memorial Stadium. Boston College was supposed to run through and around the UMass Minutemen. The problem is, no one told the Minutemen that.

UMass more than held their own in a 45-28 loss to Eagles. Boston College jumped out to a 14-0 lead in the first quarter and it seemed like the Romo was on. The UMass defense buckled down in the second quarter and kept it a 14-0 game going into halftime. The game could have been even closer but UMass failed to finish a drive in second quarter, stalling at the one yard line on a 4th and 1.

Being down only 14 points with a true freshmen starting at quarterback, you would have the Minutemen would have packed it in. Instead, they scored 28 second half points and went toe to toe with an ACC opponent. The outcome may not have been what the faithful were looking for but head coach Walt Bell was proud of his team.

“I thought it was an unbelievably valiant effort by our guys. I thought they played their asses off. First and foremost, those guys played hard. As long as we do that around here, we’ll have a chance.”

The Minutemen came into the game down four starters and lost four others at various points during the game. Despite that, UMass never quit and played hard despite being undermanned,

Brady Olson was a big reason why UMass was competitive on Saturday. The precocious true freshmen completed 14 of 29 passes for 214 yards and three touchdowns. Olson also threw two interceptions but he looked calm, collected and in charge. The moment was clearly not that big for him.

“Brady has unbelievable self confidence,” Bell said. “He’s not a mistake repeater. He handles failure unbelievably well for a kid that’s so attentive. Typically, when you get those Type A guys, they dwell on mistakes. He does not. He’s got great moxie, a great demeanor.”

Olson embraced the challenge after he found out on Thursday that he would be starting.

“Right when he told me, I just knew I had to lock in for the team.”

Part of the reason Olson and the rest of the offense played so well in the second half is the fact that Bell decided to trust them more and open up the offense.

“I felt like I was trying to babysit the offensive line and the quarterback too much,” Bell said. “I went in at halftime and said ‘I’m done babysitting. We’re going to attack these guys.’ I thought our kids responded well to that. We took the training wheels off and played better football.”

Despite the success on offense, the defense struggled to get stops in key moments and the Minutemen made two huge special teams mistakes that both result in Boston College touchdowns. A muffed punt returned by Jaiden Woodbey and a 96 kickoff return by Travis Levy.

UMass still has a long way to go in terms of being consistently competitive but they proved on Saturday that they have the talent to compete and improve. Given where the program is right now, that is really all you could ask for. Bell is excited to move onto Eastern Michigan and to give the school its first win this season.

“I’m excited to prepare with this group next week. We got another great opponent, a well coached team coming to our place next week.”

After Saturday’s performance, UMass fans will set a higher bar for the program moving forward. It will be interesting to see if the Minutemen meet that standard the rest of the way.