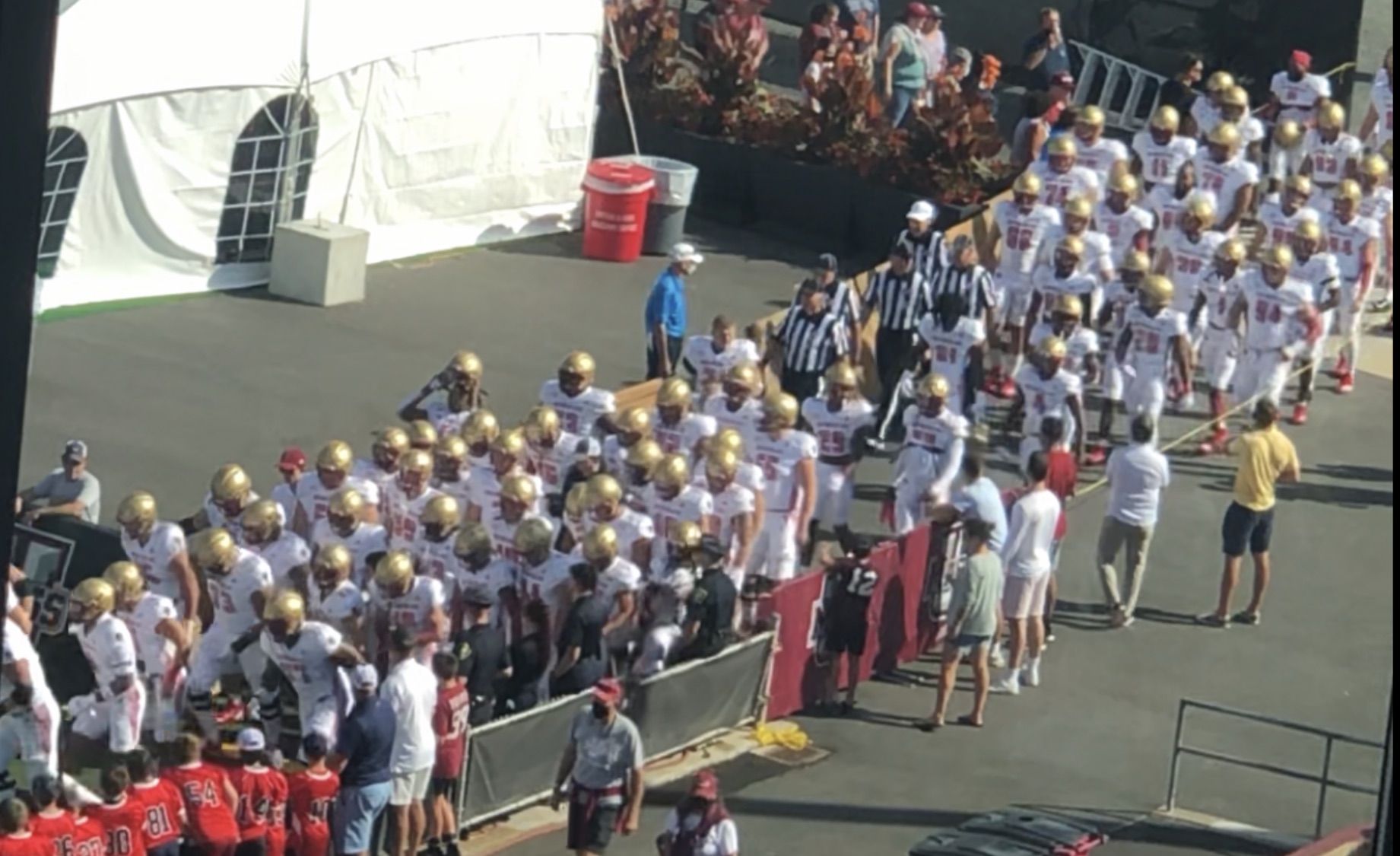 AMHERST – The old saying about baseball games is that anytime you head to the ballpark you might see something you never have before. On Saturday afternoon, it applied to football.

Boston College visited UMass for the first time since 1982 as 37 point favorites, but lost their starting quarterback one drive into the game and had to withstand a furious, downright stunning upset bid by the Minutemen before ultimately leaving with a 45-28 win.

In the third quarter, the teams combined for an insane 42 points that included offensive and special teams touchdowns. After announcing their starting quarterback Tyler Lytle wouldn’t be playing on Friday night, former Milford QB Brady Olson got his first career start as a true freshman for the Minutemen and out performed Dennis Grosel. Pat Garwo led the Eagles offense with 164 yards rushing on 15 carries. BC also had 11 penalties for 99 yards while UMass had only five penalties for 50 yards.

Basically, the 12,118 on hand at McGuirk Stadium were in a Seinfeld-style bizzaro world for three hours. The Eagles were playing the part of Jerry, George and Kramer while UMass had the role of Kevin, Gene and Feldman.

“It’s disappointing because last week was so clean and this one wasn’t,” Hafley said of the penalty issue creeping back up. “It felt like we were just giving them yards and first downs. No disrespect to them, I thought they did some really nice things, but it felt like every drive was a result of self inflicted wounds. That clearly starts with me. I thought I had it fixed I clearly don’t.

“Sometimes it’s good to go through that and rattle the cage a little bit and get back to work on it, but I’m really disappointed in that.”

Five plays into the game Olson (14-29, 214, 3 TD, 2 INT) was picked off by Josh DeBerry. Phil Jurkovec and the offense methodically marched downfield and capped the 14-play drive with a 6-yard run from Alec Sinkfield. Earlier in the drive though, Jurkovec injured his wrist on 3rd-&-9 when he hit Trae Barry (5-98-1 TD) for a 17-yard gain. It was the last play of the day for Jurkovec.

“I don’t really know,” Hafley said regarding the injury or what happened exactly. “All I know is they said it was something with his wrist or his hand, they took him for X-rays and I’ll get the details and hopefully get them to you (Sunday).”

Dennis Grosel (11-14, 199, 1 TD) had a 2-yard touchdown run late in the second to make it 14-0 after one. UMass’ next drive lasted 8:27 and spanned 68 yards but ended with a Mike Palmer stuff at the goal line on fourth down in what turned out to be a massive missed opportunity for the Minutemen.

The insane third quarter began with UMass recovering a fumble at its own 42. More importantly for Eagles fans, Zay Flowers was injured on the play and needed to be helped off the field before returning later in the game.

Olson made it hurt two plays later with a 56-yard TD to Rico Arnold to make it 14-7. BC answered with a quick drive and Levy had an easy 20-yard touchdown run right up the gut to push it back to 21-7. One play after forcing a three-and-out Grosel hit Barry for a 44-yard touchdown and seemingly put the game away at 28-7 with 8:04 left in the third.

BC’s defense forced a punt on the next drive but Levy muffed it and the Minutemen recovered inside the one, then scored on a short run by Kay’Ron Adams. Minutes later, the Eagles punted it back to UMass, but Vinny DePalma laid a huge hit to jar the ball free and Jaiden Woodbey took it to the house for a 41-yard scoop and score and a 35-14 lead.

“Honestly, it meant the world,” Woodbey said of his first points in a BC uniform.

The insanity wasn’t done yet as Olson hit Eric Collins for a 15-yard TD on 4th-&-5 to keep UMass in striking distance heading to the fourth. A 27-yard Danny Longman field goal early in the quarter pushed the lead to 17, but Olson had one more touchdown in him, hitting Eli Merriweather for a 14-yard touchdown.

Levy quickly squashed any upset hopes the Minutemen still had, running the ensuing kickoff back 96 yards for a touchdown and the 45-28 lead. Brandon Sebastian picked off Olson a bit later on and the offense proceeded to kill the final 6:12 remaining with a 13-play, close it out and let’s get the hell out of here drive.

The Eagles didn’t do a lot of things on Saturday, but good teams find ways to win when they’re not at their best (don’t be Florida State) and on a day where BC wore the red bandana jerseys, they showed a level of grit and resolve that Welles Crowther and his family could be proud of.