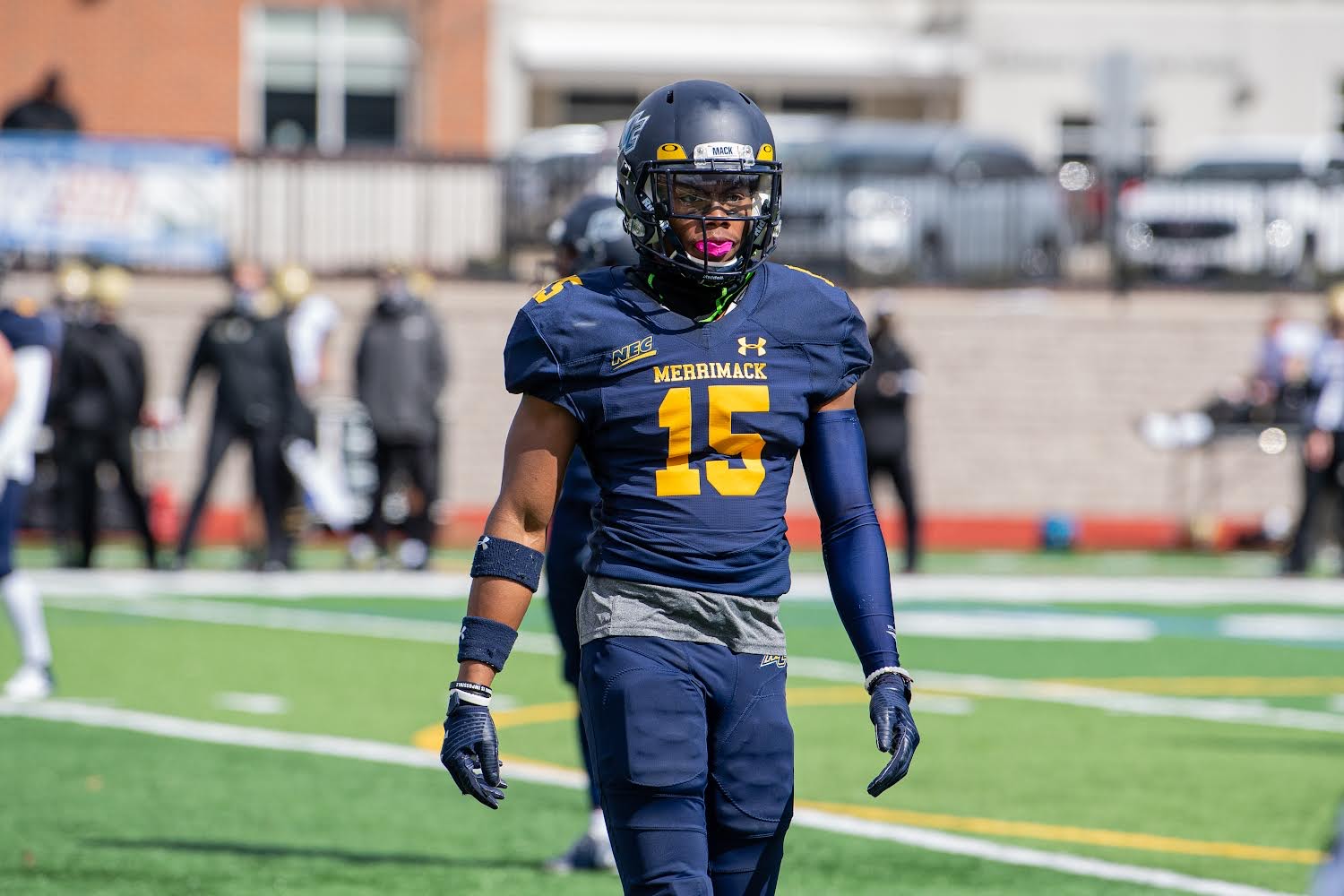 
WORCESTER – Facing a nationally ranked offense on the road, Anthony Witherstone flipped the script on Saturday for Merrimack.

After making the 54-mile drive from North Andover to Worcester, the Warriors walked on to No. 24 Holy Cross’ Fitton Field ready for the moment. Prior to kickoff, the true game day atmosphere returned as the Crusaders baseball diamond was filled with cars as home fans tailgated before crossing the street to stuff the stands. The excitement only intensified when sophomore quarterback Matthew Sluka found senior wideout Spencer Gilliam for the game’s opening touchdown.

The Warriors responded five minutes later with one of their own before Holy Cross started their next drive. That’s when Witherstone changed everything. As Sluka aired a pass out to a receiver halfway through the first quarter, the redshirt senior cornerback jumped up and pulled the ball down with one hand. He then promptly burst off for a 30-yard pick-six.

“We were in man coverage and I just saw the ball in the air and tracked it,” Witherstone said. “I thought I could get a hand on it, turns out I caught the ball. As soon as I got it, I just hit fast forward. I always wanted to be a ball hawk and take touchdowns away from guys.”

“Anthony’s the one everyone sleeps on,” Merrimack coach Dan Curran said. “He’s really developed. Probably the best thing about him is he’s an amazing teammate and a great leader in the program. It was awesome to see him get rewarded with that play today.”

The pick-six grab by Witherstone gave Merrimack a lead they would never relinquish as the Warriors claimed a 35-21 win while moving to 2-0 on the season. Holy cross dropped to 1-1 after upsetting Uconn last week. Merrimack hasn’t been a Division 1 team for very long, but Saturday’s win was historic considering it was the program’s first over a ranked FCS opponent.

Making it even sweeter is the fact that three years ago, there was a chance the hero of the afternoon might not have been on the field at all.

In 2018, Witherstone broke his ankle during camp, just three days before the Warriors opening game. After missing an entire season, he returned in 2019, just to dislocate his elbow. Yet, he still made it back to record three pass breakups and his first career interception.

“I had to learn from that experience. I got better and stronger,” Witherstone said. “It was awesome to get back on the field. A bunch of setbacks, but now I’m here.”

A corner who models his game after Deion Sanders, the former three-time state champion at Bishop Hendricken High School has already tied his career-high for interceptions just two games into the year. And he’s set for more.

But Witherstone wasn’t the only Merrimack guy who stood out Saturday. Following his pick-six, graduate student Westin Elliot laced the ball through three Crusaders into redshirt freshman Jacari Carter’s hands in the endzone with nine seconds to go before halftime. They then walked into the locker room with a 21-7 lead.

Not a team to slow down, Warriors junior running back Matt Brehon pounded the ball in from seven yards out before Holy Cross freshman back Jordan Fuller returned the favor to make the game 28-14. In the fourth and final quarter, Merrimack freshman Victor Dawson ruined any chances the Crusaders had at a comeback with a four-yard rush that led to the 35-21 victory.

“We knew we had a huge test in front of us this week. They weren’t gonna hand it to us, we had to battle. I’m proud of my kids,” Curran said. “We talk about being Macktough, it’s not just physical. Our team really embodies that, and it was on full display today.”

Following the win over a nationally ranked opponent, the Warriors crowded the away locker room and made plenty of noise. What followed was smiles and handshakes as Merrimack football walked out of Worcester 2-0 with a historic win in their back pocket.

Not bad for an unranked team.

“I’m super proud of these guys to be able to come in on the road against a talented team that’s very well coached. To come in and pull this win out, it says a lot about the type of leadership we have in this program,” Curran said. “… I want them to enjoy this one. It’s a big one, it’s probably biggest win in program history to beat a nationally ranked team on the road.”