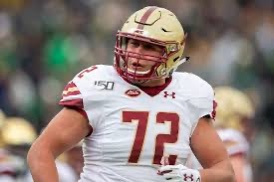 Saturday is going to be a day you only dream about as a kid for Alec Lindstrom.

Lindstrom, who played high school football at Shepherd Hill, will get to reacquaint himself with former teammates and opponents on the UMass side when the Eagles travel to Amherst with basically his entire family and hometown on hand.

On Wednesday, Lindstrom also tried to answer a question that may never have an answer, where does western Massachusetts begin and central Massachusetts end?

There were also some heavy blows thrown in his response to what the rivalry on the field is like in Massachusetts High School football. Here’s everything Lindstrom had to say about the unique experience he’ll get to share with a ton of family and friends this weekend:

On any potential trash talk this week between former Shepherd Hill teammates or high school opponents on the UMass side:

“No trash talk for me. As you can imagine, no trash talk from me, but yeah I know a couple guys on UMass (Zack Magdis) their starting linebacker, he’s a great linebacker, I went to high school with him. I played with him, he’s a very athletic kid, good football player. I know some other guys that I played against in high school there, so it’s going to be awesome and good to see them and reconnect with them because I haven’t seen them in so long, but trash talking? No, I’m worried about watching the film and letting the play doing the talking, you know?

“You’ve got Massachusetts, you’ve got eastern Mass, the preppy guys in Eastern Mass, all the private school preppy, not tough guys. Then, you’ve got central Mass which is the middle, like Worcester, the 508 area code, Worcester, Dudley (where Lindstrom is from), we’re directly south of Worcester and kind of that whole area. A little bit west when you’re driving down the Mass Pike, you’ll see a town here or there with just mountains and trees, that’s western Mass.

Western Mass is probably only a little bit west of Worcester, but I don’t claim western Mass, I’m CMASS.”

“In high school, you’ve got the gritty, tough guys playing central Mass football, running the ball, I ran the double wing. Then we’d go play western Mass and those guys…who knows if they even play football. Then, we’d go play the preppy eastern Mass guys – I bust Ozzy and Drew all the time because they were going to like, Nobles and BC High and all these fancy places. It’s good, it’s fun, it’s a fun little rivalry.”

On how many people he’ll know in the stands on Saturday:

“Oh, man, well, my whole family, so that’s like a clan right there. Other than my brother Christopher, obviously he’s down in Atlanta, I’ve got my brother Ryan, my parents, my three younger sisters, my aunts, my uncles, my grandma, my mémé, then I’ve got people from my home town going, so I mean, it’s going to be a village. I’m surprised they don’t have their own section right now it’s such a large clan, but I’m super excited to see everyone, it’s going to be a lot of people.”