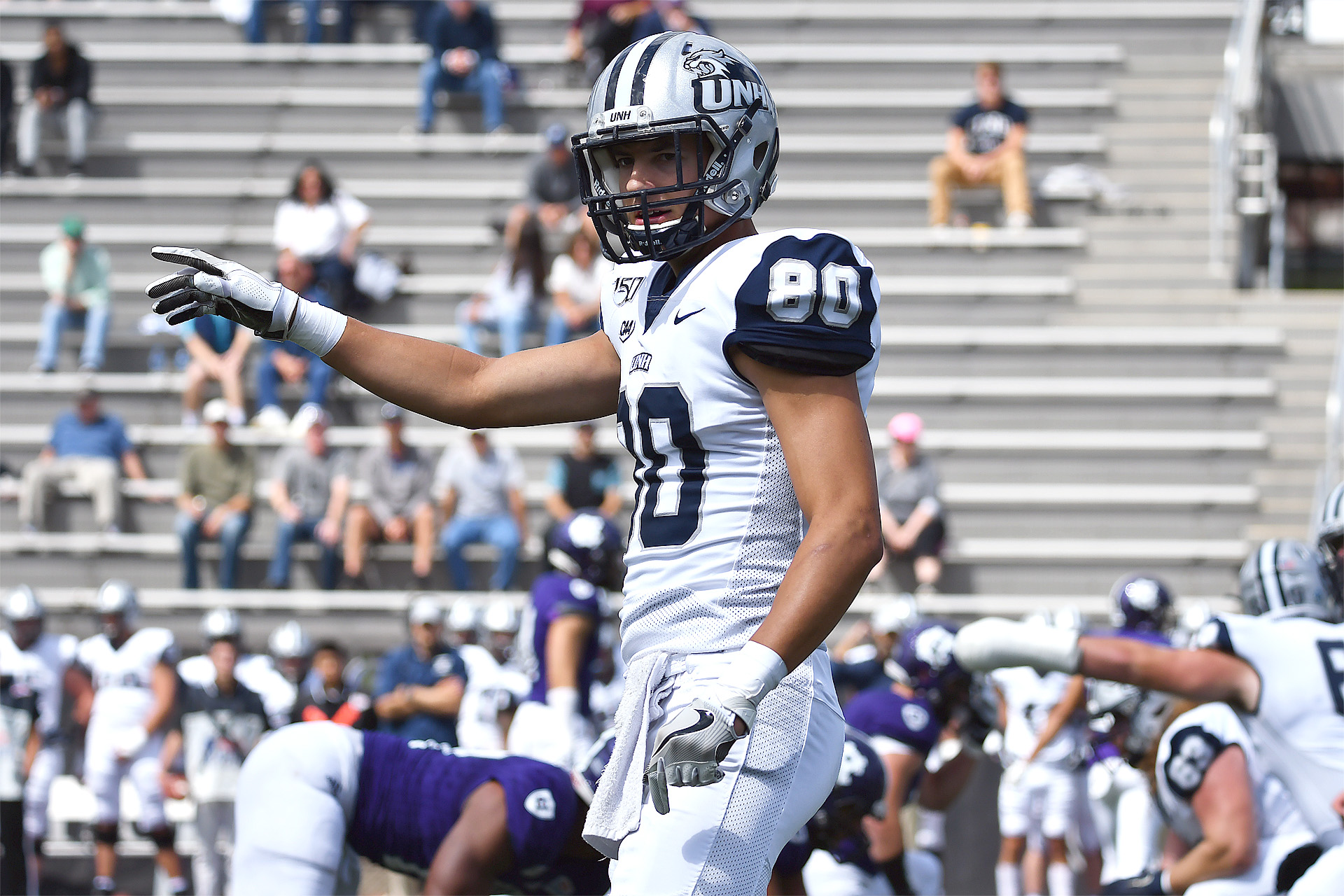 On November 23, 2019, the UNH football team beat Maine to close out its season.

That day, Brian Espanet had four catches for 43 yards, backup quarterback Bret Edwards completed one of four passes for 15 yards and Pop Bush had one solo tackle. The Wildcats finished the year 6-5, but none of the players or coaches on the field that day had any idea they’d have to wait almost two years to celebrate another victory.

On Thursday night in the season opener against Stony Brook, Edwards – now the starter with Max Brosmer going down – threw three touchdown passes, Espanet hauled in two of them and led the team with five catches for 100 yards and Watson was a monster on defense with 10 tackles, an interception, a forced fumble and a sack.

649 days after celebrating the program’s last win, that victory feeling finally returned to the UNH locker room after a nail-biting 27-21 win. Perhaps more importantly, the guys were just happy coach McDonnell didn’t have to yell at them for nearly blowing a 27-0 third quarter lead.

“It’s a feeling you can’t explain,” Bush said of finally celebrating a victory with his teammates again. “If you’re not in this locker room with us…seeing coach (McDonnell) smile, not yelling at us, happy to see us win, do everything he said we were supposed to do, throwing the fists, playing hard on defense, making blocks on offense, it’s a feeling you can’t explain.

“Your stomach is all the way up in your heart, it’s what we’ve worked so hard for and it came to fruition”

“You’re 1-0 in the CAA on the road, that’s something special,” McDonnell said. “We played extremely well early, but later in the game we didn’t do the things we need to do to be successful. I’m proud of the kids for battling to the end and they found a way to win.”

It was an ideal start for the defense, Edwards and Espanet, taking a 20-0 lead at halftime. The Wildcats’ first drive of the season was an 11-play, 84-yard march that ended with Edwards (17-for-25, 233 yards) hitting Kyle Lepkowski from 4-yards out but the try after failed leaving it at 6-0.

The score remained that way until Stony Brook was pinned dipped inside its own 5-yard line in the second quarter. Bush soon came up with a strip and Zedane Williams recovered the fumble inside the four. One play later Edwards pitched the ball to Sean Coyne on a read option and Jordan Conn’s kick made it 13-0 with 8:37 to go in the half.

Jonathan Collins Jr. had an interception on a tipped ball a few plays later and again set up Edwards and the offense inside the Seawolves’ five. Edwards hit Espanet for the short TD in traffic and it was quickly 20-0. With 2:51 left, Bush had an interception and a 65-yard return down to the Stony Brook 20. The Wildcats had a chance to make it a 27-point halftime lead but were stuffed on 4th-&-goal as time expired.

Espanet reeled in his second TD of the game – a 64-yarder from Edwards – near the midway point of the third quarter for the 27-0 lead.

“He worked extremely hard in the offseason and the preseason,” McDonnell said of Espanet. “He’s been very healthy for the most part and when he’s healthy he’s a very good receiver in this league. He’s long and athletic. I was busting his chops on the play he didn’t get in the end zone on and he was laughing, but he’s a great kid and he works hard. He’s a UNH prototype receiver. He ain’t real flashy, he ain’t real fast but he gets open, he makes the tough catches in tough crowds and does a great job.”

Stony Brook wouldn’t go quietly, scoring twice on a Ty Son Lawton 3-yard run and a 41-yard Tyquell Fields pass to Khalil Newton before the quarter ended to cut it to 27-14. Bush came up with a huge sack on 4th-&-5 with the Wildcats backed up to their own 15, giving UNH the ball back with 9:16 left. A huge catch and run from Dylan Laube should have been a dagger play as the Wildcats moved down to the Stony Brook 25, but UNH fumbled two plays later.

Fields calmly moved the Seawolves downfield and capped the drive with a 17-yard TD run to cut the Wildcats’ lead to six with 3:03 left. UNH was forced to punt and Stony Brook took over at its own 44 with exactly two minutes left and no timeouts. After a few controversial plays and a review, UNH finally sealed the victory by forcing an incomplete pass on 4th-&-6.

As coach McDonnell, Edwards and Bush sat outside the locker room doors speaking with the media after the win, it was abundantly clear that the Wildcats were enjoying the hell out of their win.

“We’ve got a long ass bus ride home tonight that the guys will enjoy,” added McDonnell. “It’s a lot better driving home 1-0 than 0-1.”