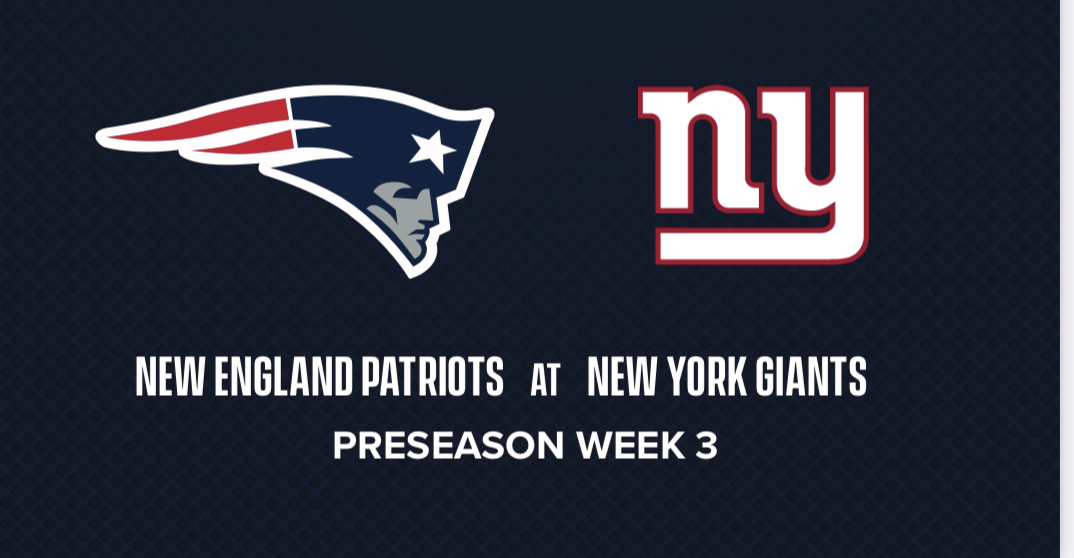 Only 60 minutes stand between the Patriots and the end of the preseason. Mercifully.

Sunday night’s preseason game against the Giants (6:30 p.m., WBZ) is the final tuneup before beginning preparation for the Miami Dolphins in arguably one of the most anticipated seasons in recent history. Roster spots are still on the line, the quarterback situation is still a complete mind-bleep, the cornerback questions without Gilmore remain plentiful and what we thought was going to be a much better wide receivers group has still just been mediocre thus far.

It’s probably going to be Cam starting, but does anyone really have any friggin clue at this point? It seems like an obvious decision after Newton proved he is unreliable no matter how good of a locker room guy he may be and Jones lit up the Giants during practice on Wednesday. If you game plan with Newton for two weeks to go up against Brian Flores and the Dolphins and then Mac finds out he’s starting the night before because of Covid issues what does that do to his mindset early on? What does that say to the rest of the team that you decided to go with the guy who is putting his team at a competitive disadvantage when the rookie has done everything right? We’ve always been told every decision is in the best interest of the team.

It’ll be interesting to see how much Newton plays tonight. If he’s in-and-out again, then we know he’s the guy and there’s nothing we can do about it. However, let’s say he plays the first quarter and some of the second and Mac plays the rest of the second and some of the third, well then I think we can seriously wonder whether Belichick is starting to shift his decision based on getting an equal look at both guys. If Jones plays the majority of the game and we only see Brian Hoyer for a quarter it’s pretty clear he’s the No. 2 guy, at least for now. The good news for Mac supporters is it seems like if Jones is able to continue improving it will make the leash on Cam shorter.

The first regular season game is two weeks from today and Stephon Gilmore hasn’t practiced once. If you were a believer that everything would be fine and he’d be here for Week 1, you’re rapidly running out of time. There’s a very real possibility that he’s now sitting out half the season, which makes this defense go from potentially elite to potentially middle of the pack.

Matthew Judon, Christian Barmore and Josh Uche have all established themselves as legitimate pass rushers, but they can only do so much. JCJackson – who has been outstanding in the preseason and throughout training camp – is now your No. 1 guy. Is he ready? If the Giants play their starters for at least a half it’ll be good to see him be that “shut down” guy, he did have a few good practices during the week. However, after that who can you truly depend on? Jonathan Jones, Jalen Mills and Joejuan Williams have all had flashes of good play but they’ve also had plenty of moments where they’ve been beat. This final game would go along way in restoring the fan base’s confidence in the secondary’s ability without Gilmore out there.

Admittedly, I may be a bit harsh when I say that this group has been mediocre during training camp and the preseason. Nelson Agholor and Kendrick Bourne have clearly been nice additions but they’ve both had some drops at times and haven’t shown the consistency you’d expect with veterans. Gunner Olzeweski is probably going to make the team as a punt returner but he hasn’t been very effective and had a brutal drop on a would-be Jones TD pass against the Giants in practice this week. Jakobi Meyers is your go-to guy at this point and that should be pretty scary when you really think about it.

The tight ends are obviously going to take a ton of pressure off those guys this season, but it would be nice to see them put together a good final performance tonight. Don’t forget about the N’Keal Harry saga either. What are they going to do with him? Can Kristian Wilkerson take advantage of his absence and make the team? Can Isaiah Zuber make a late push with a big game on Sunday? It could be a huge night for that group.

It’ll be fascinating to see how the coaches in this game and others around the NFL handle playing time on Sunday. With a two week gap in-between the final preseason game and Week 1, will this be more like the “dress rehearsal” third preseason game we’ve all grown accustomed to or will coaches treat it more like that throw away fourth game? I have a feeling the Patriots starters go the whole first half but, knowing my luck I’ll probably be dead wrong and they’ll get a series or two.

Only 60 minutes separates us from the most scrutinized Patriots preseason in history and the regular season. The only tough part about Sunday night’s game is that if you’re anything like me, the Giants logo brings back painful memories of what could’ve been in 2007. I’ve made peace with 2011, we’ll always have the Cundiff miss.