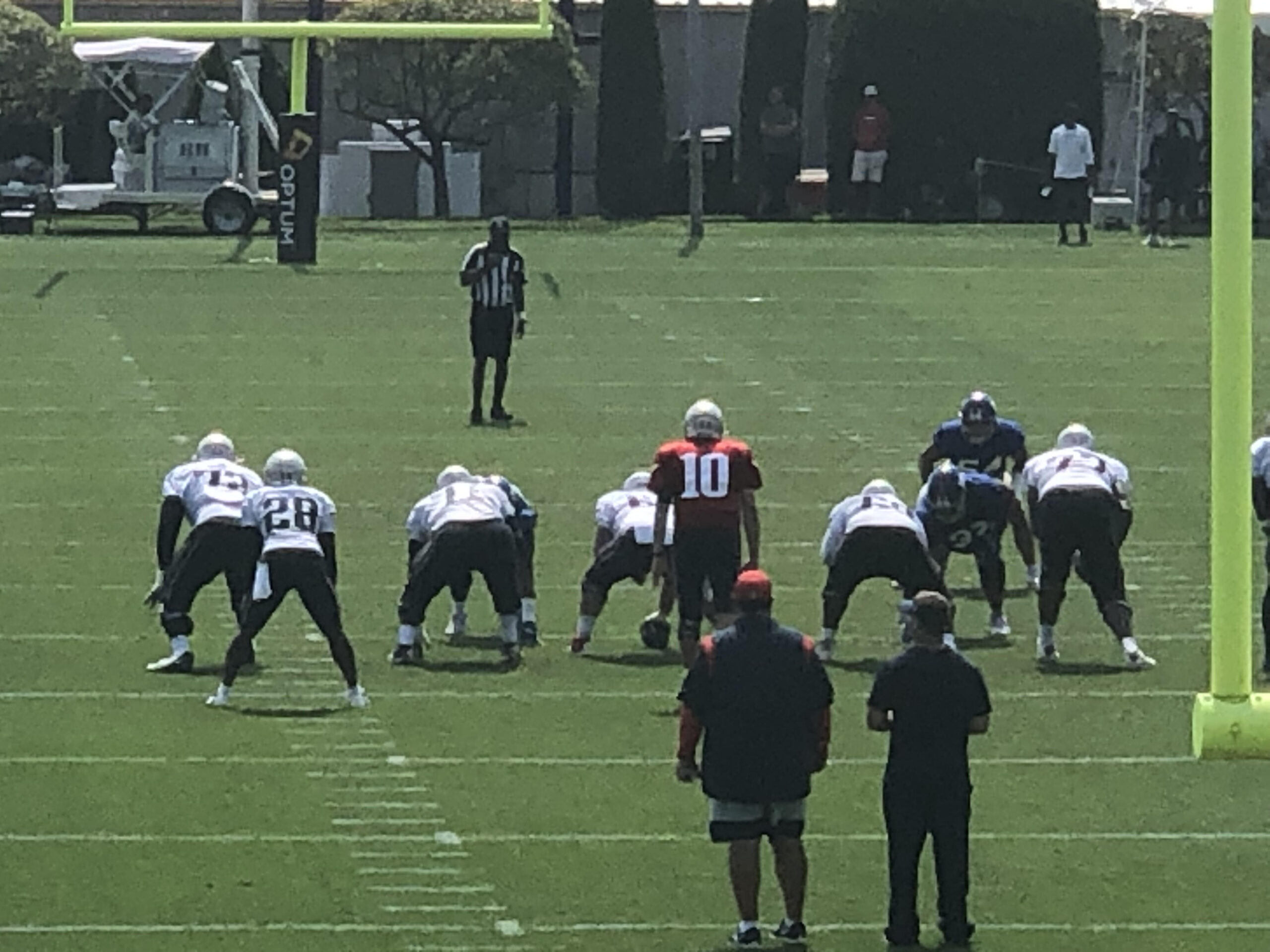 If you were one of the thousands in attendance at the Patriots and Giants joint practice on what was a sweltering Wednesday morning, make sure you keep the posters they were handing out or anything else you may have taken home from the experience.

It may have been a turning point kind of day for the direction of this franchise moving forward.

The Pats and Giants had an old-school, tough, hot training camp day that have been few and far between over the last month. Jones got all of the important reps with Cam Newton still out and looked like a perfectly capable NFL quarterback in every situation and both Bill Belichick and Joe Judge put their teams through a lot of them. Jones was decisive, accurate and elusive in the pocket throughout the grueling session that lasted over two hours and at one point completed 19 straight passes.

Jones’ most impressive throw of the day came in some two minute work early on, something he has shown great command of throughout camp and the preseason. Down near the red zone, Mac let a back shoulder throw for James White go with a linebacker draped on him. White caught the ball with his right arm while fighting off the defender with his left, barely getting his head around before the ball thudded into his shoulder pad.

That was his most impressive throw, but the most important part of his day may have come at the two hour mark during another situational period. With 1:45 on the clock and the ball on the Patriots’ 20, Jones calmly and efficiently moved the ball downfield. At one point while rolling to his right after a defender came untouched up the middle, he hit Jakobi Meyers on a comeback on the Giants sideline early in the drive with Meyers doing a great job of keeping his feet in bounds. Belichick adamantly gave two or three first down signals and yelled to make sure the referees gave Meyers the first down.

On the same drive, Mac hit Meyers deep down the left sideline, putting the offense inside the 10-yard line, getting a huge cheer from the enormous crowd on hand. Jones finished the drive hitting a wide open JJ Taylor for a short TD and gave a huge fist pump after. Phil Perry later reported that Belichick sought out Jones following the play before heading out to watch the defense, giving him a low-five before posting up in the secondary.

Every single reporter, fan, security guard or staff member that sat in the heat to watch the show on Wednesday would all tell you the exact same thing, Jones looked like the best quarterback on the field and really, it wasn’t even up for discussion. Jones looked even better than Giants’ “franchise” QB Daniel Jones who had fits with the Patriots defense. Even when Mac had a ball batted down or an incompletion and showed a little frustration he almost immediately came back and hit his next throw.

Before anyone tells me to relax on Jones, tell the rest of the media and fan base the same thing. Jones is unquestionably the correct QB for this offense and Newton’s unreliability should only cement that. If Belichick was waiting for Jones to truly separate himself then Wednesday was the performance he was looking for. Mac Jones looked like “the guy” at all times.

I’m not saying he’s going to win six Super Bowls or go to more than Tom Brady. What I am saying, however, is that August 25, 2021 very well may be the day the Mac Jones Era began. Keep those towels and posters.