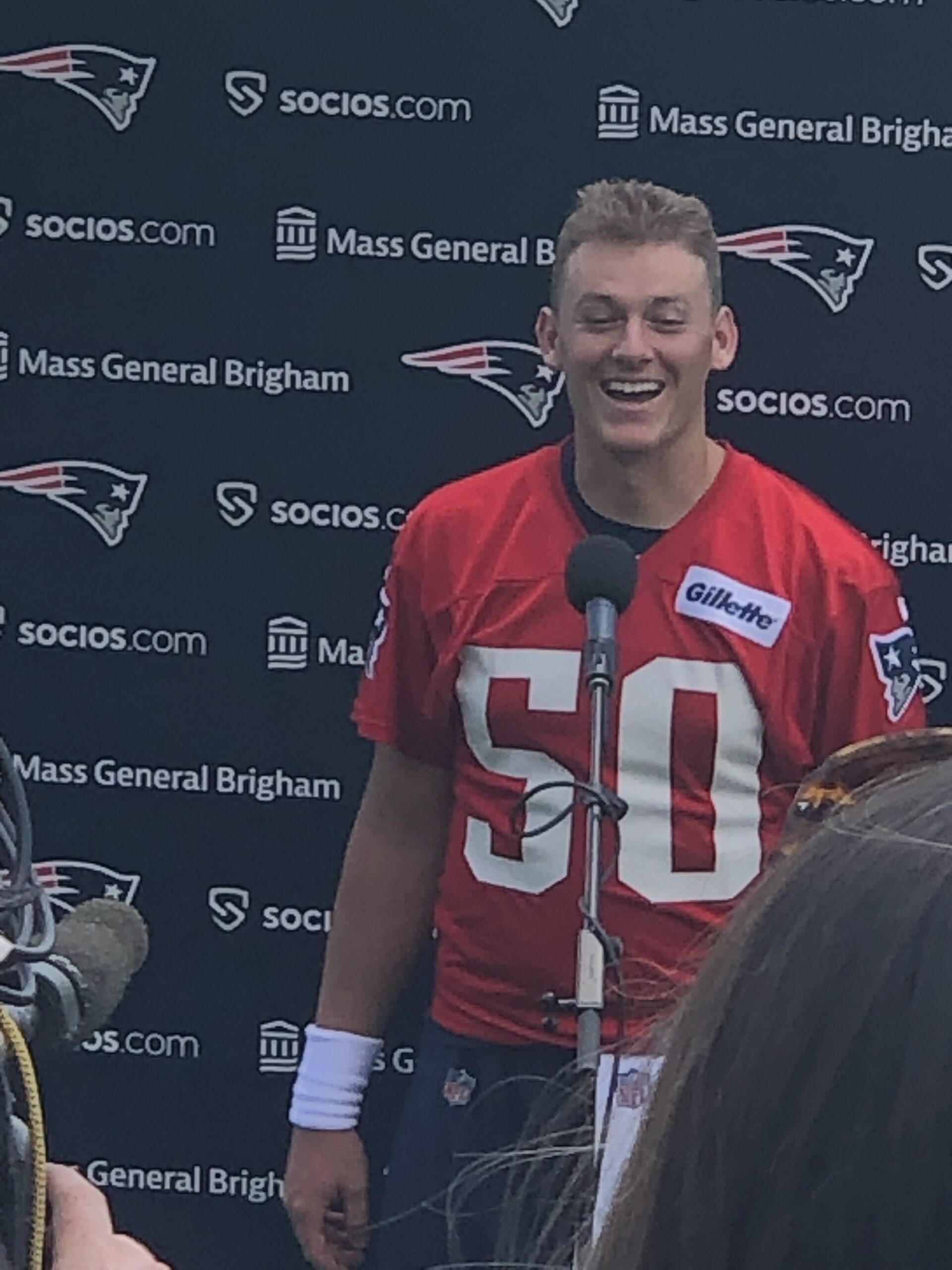 Friday morning provided us with the best competition between Mac Jones and Cam Newton that we’ve seen thus far.

The two went toe-to-toe in various passing situations after the first two days were mostly red zone work. Following practice, Newton and Jones both met with the media in person for the very first time as well. Here’s everything (literally just about everything) that stood out from the two guys everyone has their eyes on…

(on developing a relationship with Mac Jones)

”To be honest with you, it’s still a learning process. I told Mac this (Thursday), he doesn’t know me yet, I don’t know him yet as far as comfort. I’ve been around Brian long enough for him to know how to get me going and obviously Stiddy and us. Just a couple months with Mac, he’s a person that over time you’ll get to understand and know. Hey may be a guy you’ve just got to (ra-ra type speech) or afterwards he may be a guy who you just leave alone.

“As a young player you know what your expectations are and you know you’re better than what you’re producing and that even still happens with me. It doesn’t matter if you’re 11 years in, one year in, 14 years in, for us it’s knowing that we have a standard that we have to meet each and every day, and of course there’s going to be disappointment when you meet it. Mac has been great, Brian has been great, everybody has been just trying to learn each other and be the best teammates we can.”

“I’m getting older. You just have to move a little differently. It’s not about proving certain things. We all know what I can do running the football at this particular point in time. If it needs to come to those things I’m willing to risk it all, but yet if it doesn’t require that then of course, you have to be a little bit more mental because a nick or a bruise where I’m at it sticks a little longer than just a day and then you go about your business.”

(on how he would describe Jones)

“Oh man…cool like the other side of the pillow. You never know when he’s really down on himself and you never necessarily know when he’s up either. He’s real cool. I’m surprised about his knowingness of hip-hop. I’ll catch him in the locker room sometimes quoting some Future, some Baby, but those are things you just learn with time.

“We had an opportunity to meet in OTA’s and really get it, but there’s still going to be another curve when it comes to game times. It’s good we get preseason games to get these live bullets. I’m pretty much here for him, just like Brian is here for him and I hope…I know it’s reciprocated on all fronts.”

(on actually having an offseason to go through the playbook)

“Moving forward knowing what my reads are and the faster I can go with the football the better off it’ll be.”

(on getting adjusted to new teammates)

“It’s still a process trying to find ways to fit their comfort zone. Do you like a back shoulder? Do you want to go up and get it? Do you want to run past them? Those are different conversations that have happened via text, phone calls, face-to-face and we’re trying to get it. I missed a couple today where I know it needed to happen to get it on film to know “alright (Nelson Agholor) what are you thinking?” Alright Jonnu what are you thinking right here?” Alright (Hunter Henry) what are you thinking here?” Then we coach each other up on it and we come back and come back tomorrow and get better.”

(on his competitive spirit)

“It’s always been high. I’m a competitive person. You want to go race right now so I can show you?”

(on interacting with fans again)

“I’m not sure if you guys know my resumé but I’m a guy who wears his emotions on his sleeve, I need that energy. The football giveaway (after a touchdown) is nothing new for me, so I plan on giving a lot more footballs away, hopefully a lot more on Sundays and really get the fans involved from the kids, to the fans and everybody alike.”

“We all have our roles on the team and no matter what’s expected and you have to make sure you’re holding yourself accountable as a person who leads by example first.”

“That’s a nice compliment, I’d say the same about Cam. Obviously, with any relationship and meeting someone new, regardless of position, if he’s a teammate or not you have to form the bond and the trust. He’s been a great teammate and he’s helped me have a lot of fun. The first couple practices as a rookie are going to be hard, so he just tries to stay positive with me and that’s just who Cam is. Hopefully I can learn, try to be like him in some ways and have fun with it.

“We’re going to grow together and help each other win games hopefully.”

“It’s just figuring it out here in a new place. You’re new, you have to meet everybody and you want to form relationships and you want to do your job really well. For me, if I’m the one guy on the field that’s not doing their job and 10 guys are doing the right thing, I feel like that’s my fault, which it is. I’m always hard on myself, I’ll always be that way, but there is a point where you have to be a good teammate and keep your head up.

“As a rookie that might be hard, but you need to come up with ways to self motivate yourself and be a good teammate.”

(on making sure one bad play doesn’t lead to another)

“Not really as much anymore. I have to sometimes get it out or whatever and come up with a new mechanism to do that, my next play mentality is something I’ve worked on. It’s something I’ve heard in the meetings all the time is play one play at a time and then play one day at a time. You just focus on it and if you find yourself letting it bleed into the next play, snap back into it, do my job, here we go, whatever. You’ve got to self motivate yourself whether you’re a rookie or a vet, do your job and have fun with it.”

“It just goes back to focusing on yourself and when you’re in there you’ve got to do what you’re supposed to do as the quarterback. If they present something you’ve got to fix the problem, get the ball to the playmakers and do your job. Really, it doesn’t have to do with other people as much as it is playing your own game, support your teammates when they score, support the other quarterbacks when they make a good play and that’s pretty much it.

“You can’t overcomplicate it too much.”

(on the Pats QB competition as a whole)

“Yeah, I mean we’re all competing for a job or whatever. Our goal is to win, so obviously they’re going to pick the best player whoever that may be. I’m going to continue to work and I’ve got to get better. I’m young and I know that and I have to produce on the field. I know that comes with each play and fixing the problem, so if I can do that then things will work out.”

(on something interesting he’s learned about Cam)

“I like his outfits for sure. I can’t pull off his swag. Cam listens to some good music and it’s always fun…he might play a song in the meeting pr whatever. He’s awesome. He just has fun with it in the meetings and that makes the days go by, you’re not like ugh this is a long day, but it’s like this is awesome, we’re having fun bonding to whatever.”

(on why he’s able to get the ball out quickly)

“My whole thing is whatever the play tells you to do you do it and I’m trying to get there. I’m getting better and I don’t feel like I’m lost out there but I’ve got to be able to throw the ball to the right guy based on the coverage, based on the problem…if the ball’s supposed to be out quick to your first read then get it out, if not, just make it a process where you’re sticking to it so you’re not like “I think it’s this so let me try this,” it’s “I SEE this, do this,” if that makes sense. It’s about what I expected. It’s hard every day but it’s a new day. I’m going to have bad days, I’m going to have good days and we’re all just going to get better together.”

(on his “buckets” process)

“It’s been working. I remember what I did bad today and I’m going to go back and have my correction bucket or whatever you want to call it. I think there’s more things in the good bucket, but as the days go on it just stacks up, so I’ve just got to keep that process and stick to it because there’s things now where I’m like “okay, I remember that from spring” or whatever and I’ve watched the other guys do it and I understand how the play works now.

“I just keep doing that, keep it up because you can’t do it one day and the other day not do it.”

“Yeah I watched a lot of quarterbacks growing up. I always liked watching football Sundays, Saturdays, NFL, college, high school, whatever I could go to and watch. Obviously, I love the quarterback position so I like learning from people. When you’re an NFL quarterback you can watch them and see how they do things.

“You never want to make comparisons but you’ve got to learn what you can learn, just like anything else. Whatever your job is you want to learn from the best and watch whoever you can to try and get better.”

“I think it’s just about forming those relationships. You want to be on the same page and a lot of times when I go up to them it’s something I did wrong and I want to find out how to get better. They’re not making as many mistakes as I am because they’re older and doing the right thing and I’m trying to get there I’m working, but it’s all about the connection. You want to be on the same page. That takes time, that takes reps and that takes trust.

“We’re going to get there and that’s just something I’ve learned from watching the other guys here and just in general. You’ve always got to form the bond. Whether it’s your lineman, “what happened here?” Or your running back “hey did you see this, that or whatever?” So, it goes for everybody.”

(on being in sync with Josh McDaniels)

“Josh obviously does a great job, he’s an amazing teacher and it’s just the little details for me. I’ve got to do it right and I’ve got to do it every time. I know what to do, sometimes there’s a lot and on a longer play call or something I just need to relax and take it all in and use the information that Josh gave me.

“He’s given me all the answers to the problem, so I just need to go out there and do it. He’s got there with the other quarterbacks and we’re going to get there. It takes time and trust and he’s done a great job, so we’re going to just keep doing what we’re doing and like I said, we’ll have good days, we’ll have hard days but we’ll figure it out.”