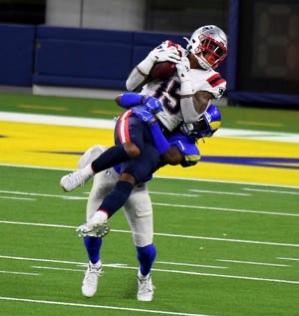 Once it was clear the Patriots weren’t going to trade him at least until camp started, we all knew the awkward day would come where N’Keal Harry had to face questions about his trade request.

That day was Friday.

Harry, who has had some nice catches over the first few days of training camp, spoke after practice. The first question he received was why he asked for the trade and Harry immediately steered the conversation towards the on-field side of things.

“Right now I’m not really worried about anything trade wise,” Harry said after the very first question was why he asked to get out of New England. “I’m just focused on how to be the best version of myself on the field, continue working hard and improving every day.”

You would think going public with a trade request on a Bill Belichick coached team would guarantee you a ticket out of town, but Harry says with focus strictly on the field things have been fine.

“Everything’s been very normal,” he said. “Like I said, I’ve just been focused on helping this team win and doing whatever I can to become the best version of myself.” When pushed on whether or not there’s been any awkwardness within the building with teammates, Harry insisted there was not.

There is still plenty of time for Harry to be traded, but for right now, is he happy being a Patriot?

“I’m a Patriot right now and I’m very okay with being a Patriot.” Harry said. Whether or not it’s true remains to be seen, but his play over the first three days has suggested that he’s turning a corner. The difference may be in his approach during the offseason.

“I feel like I’ve gotten off to a pretty good start, obviously there’s room for improvement,” Harry said. “I’m pretty happy with the start I’ve gotten off to so far and I’m looking to keep building that momentum. I feel like the past couple years I’ve been playing so big, just trying to play big, I lost a little bit of my wiggle, so this past offseason is what I focused on a lot.

“I focused on agility drills and stuff like that, just trying to get that rhythm back. I’ve been stretching a lot more, trying to work on my mobility with stretching and everything and it’s going well so far.”

Sounds like the TB12 pliability method to me, but that’s a story for another time.

Harry was also ask about how comfortable he feels on the depth chart at this point too. With the signings of Nelson Agholor, Kendrick Bourne and other pass catchers like Jonnu Smith and Hunter Henry, Harry could have easily doubted his standing on the team even more, but said he was actually excited about it.

“I was actually excited, adding players like that is just going to help us as a team,” he said. “I feel like we have so many good players on this team, at some point, at one point or another we’re going to be able to make a difference and I’m just trying to make sure I fit in somewhere.”

Some pretty famous position changes have happened here over the years and every sports radio caller from here to Maine has suggested moving the big receiver to tight end, but has he thought about it?

“I personally haven’t thought about anything like that, but if that’s what coach wanted to do I’d have no problem doing that,” Harry said. “Like I said, I just want to help this team win any way I can.”

How about some special teams?

“I haven’t heard of anything like that in the offseason, but as far as my role on special teams, I would love to do that,” he insisted. “They’ve incorporated me a little bit here and there the past two years anyway, so anything they need me to do I’ll be happy to do it.”

Harry handled the first meeting with the media since the trade request about as well as he could have and while none of the receivers except Nelson Agholor have truly stood out, Harry has been solid during mostly red zone work for the offense early on.

Time will tell if Harry can remain out of Bill’s doghouse for long, but for the time being in the immortal words of Frank Costanza, it’s serenity now.