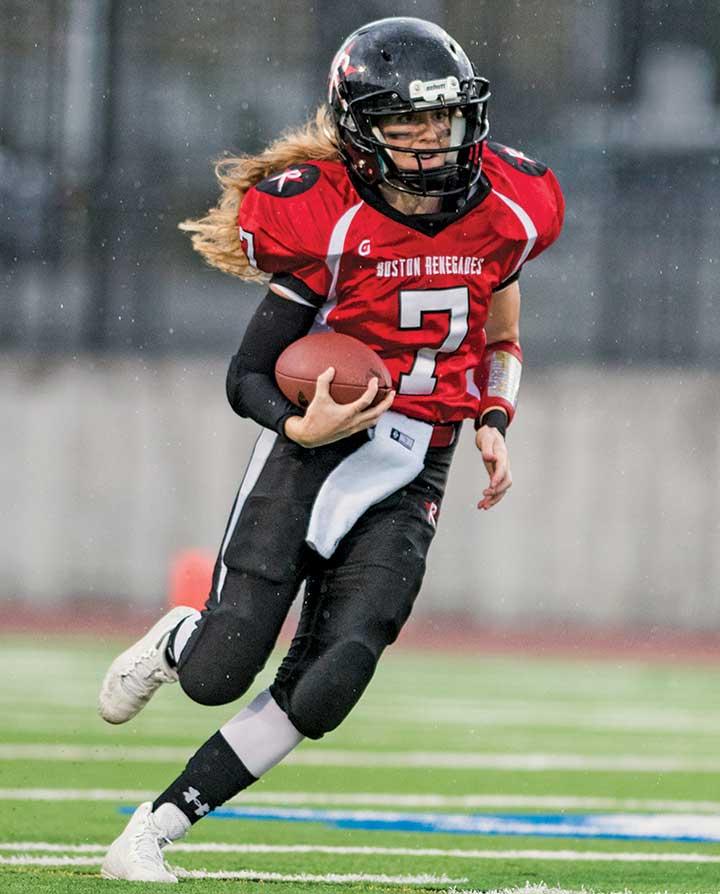 In case you’re still not over Tom Brady, don’t trust Cam Newton (why would you) and still need a new veteran quarterback with all sorts of accolades to root for, you may want to start paying attention to Allison Cahill.

On Wednesday it was announced that Cahill was named the Women’s Football Alliance National Football Conference Most Valuable Player. The MVP is the fourth of Cahill’s career. Since beginning to play professional women’s football in 2003, Cahill has been about as close to Tom Brady as you can get on the field.

When the Boston Renegades take the field for the fourth straight time in the WFA’s National Championship on Saturday night at the Pro Football Hall of Fame in Canton, Ohio, Cahill will be looking for her sixth ring as a pro and a third straight with the Renegades. Entering this season, Cahill had already thrown for more than 20,000 yards and won 130+ games.

On Thursday afternoon, Cahill and the rest of the Renegades were greeted by Patriots owner Robert Kraft before flying out to Ohio on the Patriots team plane.

“The Patriots tweeted good luck to us before our last playoff game and we thought that was huge, we never would’ve dreamed Mr. Kraft would offer us his plane and everything that went along with it,” Cahill said in a phone interview Thursday afternoon. “It was amazing to see him in person. I would say his time is his most precious commodity and he was just so patient and kind allowing or pictures and small little conversations.

“It just really felt validating for all the hard work we’ve done.”

As for the award, it never really gets old for Cahill, but winning a title with her teammates is all that matters at this point. If attitude reflects leadership (still one of the best movie quotes ever), then Cahill’s no-nonsense attitude and eight-touchdown performance in the NFC title game is all the leadership the Renegades need to continue being successful.

“I think if you’re the quarterback on the best team your name is always going to be in the conversation, so I’m just a representative of the team,” she said. “I told the O-line it’s a five-sixths split. You guys get 5/6 of it and I get 1/6 of it. None of us can really succeed without the help of everyone around us that’s just the nature of football. It’s great and I’m glad to be a representative of the Boston Renegades, but the end goal remains the same.”

A former standout athlete at Uxbridge High School and then Princeton, Cahill acknowledged that given that a title chase wasn’t an option in 2020, this run has been even more special.

“Anytime you miss out on something that is a huge part of your life and passion there’s just a really big void,” Cahill said. “It’s extra special. Some of our rookies started last year and never got to play a game and now here they are in the ultimate game. It’s been a long haul and it would be a great way to essentially end what amounts to a two-year run.”

Cahill and her teammates understand that the Renegades may not be getting the same attention as the other teams to bring titles to Boston, but she also knows plenty of eyes are starting to open.

“To be a fan and a New England resident as well an athlete in this area trying to excel, whether or not the other teams knew it, we’ve always tried to follow in their footsteps as best we can,” she said. “Most people don’t know that we’ve added to that legacy but we know and the people closest to us know and that’s been good enough for us. We hope with this push for a sixth championship and the Patriots giving us all this exposure that hopefully more people will find out and feel proud that another team has added to that legacy of champions.”

A lot of folks will be watching on Saturday, but how does Cahill feel about being the next Tom Brady in this area?

“As an organization we’ve tried to model ourselves after the Patriots and I’ve tried to take as much as I can from watching him,” Cahill added. “I’m never going to be 6’4, 6’5 or able to throw the ball 60-70 yards downfield, but I can try to prepare and conduct myself correctly. I can be the first one in, last one out, that type of thing. He’s certainly someone I’ve kept an eye on and tried to conduct myself accordingly.

“So many of us are used to doing this work in the shadows that it’s hard to think that will change significantly, but of course we’ll welcome it and it’ll motivate us even more.”