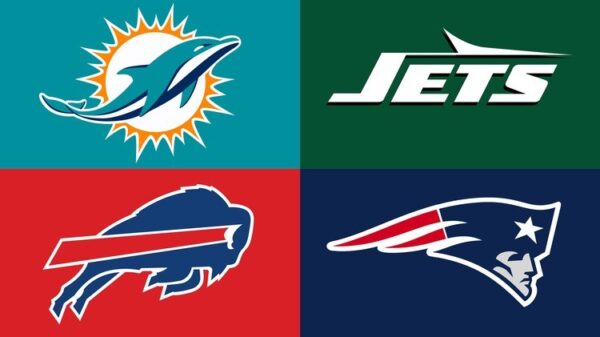 The 2021-2022 NFL season is around the corner and while you may be focused on the Patriots schedule that recently came out, what is the rest of AFC East looking at? Below I give you my predictions and what to look for from the Patriots and their division rivals.

I am bullish on the Buffalo Bills, picking them to go 13-4 while sweeping every division opponent besides the Patriots. Josh Allen lit the league on fire last season, emerging as an MVP candidate seemingly out of nowhere. Allen showed flashes of being an athletic playmaker with a good arm his first two years, but he put it all together with the help of offensive coordinator Brian Daboll. Allen’s confidence was through the roof and rightfully so, as he improved in almost every facet of the game. Here are some notable statistics Josh Allen put up this past season compared to his 2019 numbers.

Can Josh Allen replicate the year he had in 2020? It would be a tall task but the confidence he’s playing with and the chemistry he displayed with Stefon Diggs gives me reason to believe he can finish somewhere close. Retaining Brian Daboll will be huge for the Bills offense, providing some continuity for the group and their young QB. Buffalo and Kansas City are the favorites from the AFC to win the Super Bowl, though I am intrigued by the Browns this year as well. Time will only tell if Allen and head coach Sean McDermott can lead Bills fans to Lombardi land.

In my prediction the Dolphins push their win total at 9-8, splitting games with the Patriots and Jets and being swept by the Bills. I am admittedly not a big fan of Tua Tagovailoa and I think that him being benched twice for Ryan Fitzpatrick last year is very concerning. Beyond that, both times he was benched the Dolphins functioned more efficiently on offense. Tua handled the situation he was put in very well, but that will stick with anybody, especially a young quarterback who has expectations to be the guy in Miami this year.

With that being said, the Dolphins roster is loaded with talent. Offensively, they added Jaylen Waddle and Will Fuller to help out Tagovailoa as well as tackle Liam Eichenberg and BC product Hunter Long. Defensively, Brian Flores has been successful and has talent across the board to replicate that this season. The Dolphins will easily be one of the most interesting storylines to follow this season and most of their success will be dependent on their young quarterback.

I have the Patriots finishing the year 10-7, hitting the over on their win total and being in playoff contention late in the season. I have them splitting with the Bills and Dolphins and sweeping the Jets. I initially said they’d sweep the Dolphins, but going to Miami is never a sure thing for the Patriots.

I think the Patriots lose to the Buccaneers in week 4 but I think it will be closer than some might think. Bill is going to cook up something special for Brady’s return to try and knock him off, but the Bucs ferocious defense will be too much for Cam/Mac and will force a crucial turnover late. The Patriots will be looking to bounce back from their worst season in 20 years and I fully expect them to look like a different team than last year.

In this prediction I have the Jets going 7-10, just barely hitting the over in their win total. The Jets success will be largely dependent on how rookie quarterback Zach Wilson plays but if they can get his confidence up early on, there are some very winnable games on the schedule. He is a scheme fit in the offense they’ll be running so it should be a smooth transition for the BYU product.

I have the Jets getting swept by the Patriots and Bills and splitting with the Dolphins. I very, very rarely pick against Belichick especially when it’s a young quarterback starting against his defense. I also have the Jets beating the Jacksonville Jaguars week 16 in the showdown between the number one and number two overall picks from this year’s draft. Jets fans are dying for some excitement and hope for the future. 2021 could be the year they get just that.