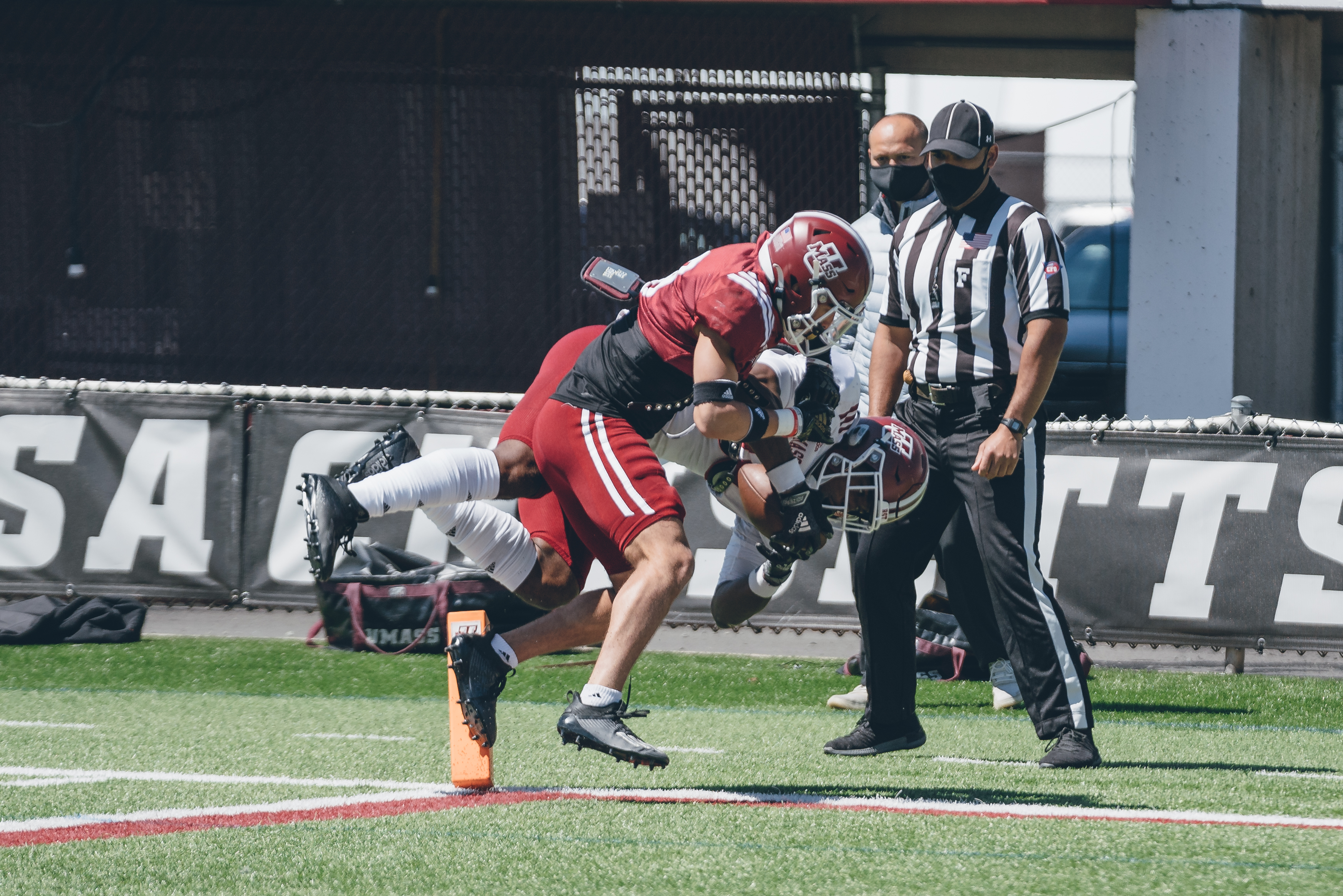 Even for a UMass football fan, it was hard to complain on Saturday.

There were plenty of positive things to say both in Amherst and across social media platforms as the current Minutemen wrapped up what was a productive spring camp with the spring game, then Larnel Coleman was selected by the Miami Dolphins in the seventh round of the NFL Draft later in the evening.

The development this spring is obviously valuable moving forward as the program looks to work its way back into the Massachusetts & New England football landscape with more regularity, but Coleman joining a growing list of players that have come into the NFL and made an impact is huge for recruiting. There were quite a few guys taken in the draft with New England ties, so the ability for a struggling program to still have that card to play while battling Boston College, Holy Cross, UNH, URI, Maine, Merrimack (who also had a player sign after going undrafted) and Bryant is arguably bigger than anything that happened on the field Saturday or over the last few months.

“Larnel dedicated himself to earning this moment and worked tirelessly in the weight room and on the field to get here,” said Bell. “Miami is getting a great offensive tackle and an even better man. We couldn’t be happier that Larnel heard his name called today.”

UMass alum Chris Girer was the one who made the call to welcome Coleman.

“I’m a UMass alum, so I’m ready for you and I’m excited for you,” he said. “Everyone talks really good about you and our scouts think you have a lot of potential here, we’re on the clock, we’re excited and we’re going to make you a Miami Dolphin.”

“Congratulations and welcome to the Miami Dolphins,” head coach Brian Flores added during the call. “Like Chris said, our scouts have a lot of good things to say about you and we’re excited to have you.”

As for the game and the spring camp as a whole, it’s hard not to like the direction the Minutemen are heading. although the alumni and others in the area – rightfully so – are taking a more cautious approach as Bell enters his third year. UMass has said all the right things this offseason and had a competitive 27-22 scrimmage with a scoring system in place to create that competition.

Defense was able to record points on three-and-outs, fourth down stops, turnovers, and holding the offense to three points. Regular offense and defensive scoring was an option too despite the game not being structured with timed quarters but rather more focused on situational football.

There was even a close game feel as kicker Cam Carson booted a final-possession field goal to earn enough points and clinch a “win” for the offense.

“I think it was a culmination of a great spring,” Bell said postgame. “I think after today we would have finished around 1,250 almost 1,300 reps. Our first spring here we only had about 800 reps knowing we were so down on bodies, so a culmination of a great spring, great day, kids had a great time, we got everybody in there that was healthy…we’re in a good spot. There was some good back and forth today, some good competition in some of the situational stuff, it was good.

“We’ve got wonderful kids that are doing everything they can to get us to the first bowl game in the history of this institution.”

The Minutemen may not have many W’s in the left hand column lately, but there is something to be said for Bell’s ability to keep a losing attitude from permeating throughout the program, in fact, it’s the complete opposite.

“Keep talking down about us, we want to come out and basically give them something they won’t expect,” said defensive back Noah Boykin. “When we line up in between the sidelines, we’re ready to show that we’ve come a long way and we’re ready to get active.”

“It was awesome, I had all the confidence in the world that the (final) kick was going through the uprights,” said quarterback Tyler Lytle. “It was a great way to cap off a great spring. We made a lot of progress but we still have a lot of work to do. It was a great way to send us off for a short break and be ready to come back and get at it in a few weeks.”

More than anything, Saturday was a day for the UMass football family to celebrate just being back on campus. Family, friends and former players were all able to attend inside McGuirk Stadium. It was a memorable day and for the first time in a long time, there is reason to believe it was the first of many more to come for the Minutemen.

“That was probably my favorite spring game set up I’ve ever been part of,” Bell said. “Simply because it was all the people incredibly important to our program. It’s our players, our coaches, our players’ families, it’s the coaches’ families and there were a lot of former players, people that really believe in this program and give to this program and it was really just our football family.

“That’s all that was here and it was a really special day.”