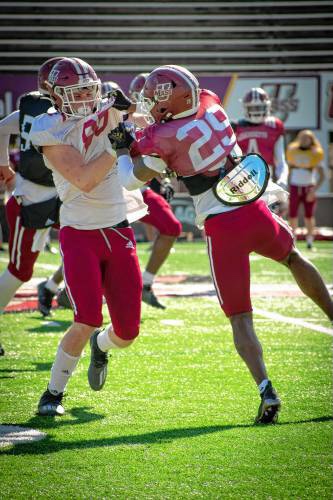 By all accounts, UMass had a productive spring. Head Coach Walt Bell was pleased with the development of his squad this spring.

Bell talked about the number of players who participated this spring and how the upgrade in talent was evident from two years ago when he first arrived in Amherst.

Due to injuries in some position groups. Bell and his staff have scraped the traditional Maroon vs. White format. Instead, they will do offense vs. defense and use a more controlled, structured format.

Bell said the plan is to run roughly 10 possessions from the 20 to the 20 before transitioning to a red zone period. There will be between 14 and 16 possessions, Bell said, and approximately 100 plays.

The game will give the staff an opportunity to evaluate all positions especially on offense. New offensive line coach and run game coordinator Alex Miller will make his debut but Bell did say this week that the plan was to keep it basic on offense. That tells me that the Minutemen are blending spread and man gap run schemes so he wants to keep it basic.

Quarterback will be the position most scrutinized in the game. Bell did say that there is an open competition and that the game won’t be the deciding factor in who the starter is in the fall.

Colorado transfer Tyler Lytle, Garrett Dzuro and Zamar Wise have been competing for the job this spring but Bell has said incoming freshmen Brady Olson will have the opportunity to come for the job.

If the Minutemen could come out of this game healthy and show improvement, that’s all that matters for a program looking to take the next step.