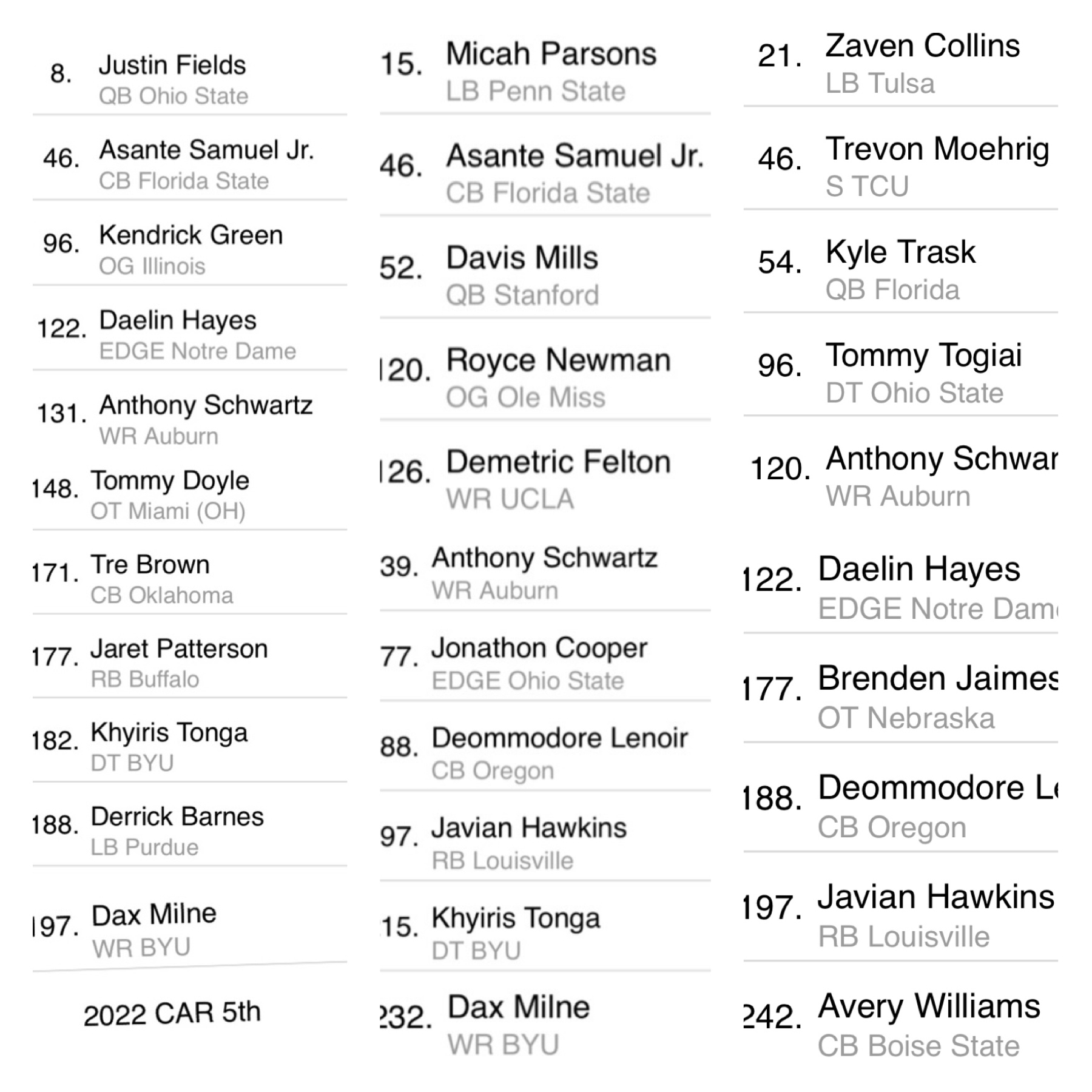 The draft is a mere three hours away and after waiting to see if the Patriots were going to make a trade this morning, I have finalized my three scenario mock drafts. Here goes.

In scenario one, I have the Patriots trading a 2023 first round pick and a 2022 third round pick in for the eighth pick in this year’s draft and 2022 fifth round pick for the right to move up and draft Justin Fields.

If the Patriots view Fields as favorably as they are rumored to, then they must think he is a franchise type quarterback and surrendering a future first round pick next year makes all the sense in the world. It is a steep price to pay to move up seven spots but franchise quarterbacks are hard to find and develop. If Belichick thinks Fields can be that type of quarterback, he should make the deal and go up and get him.

The Patriots also addressed future needs along the offensive line and secondary in this draft class. They also added two receivers that could fit in nicely with what they already have on the roster in Schwartz and Milne.

I still think the most likely scenario. The Patriots stand pat, take the best available player and address the quarterback position with either a trade or later in the draft. Parsons at 15 would be an absolute steal. His size, speed and position versatility make him a great fit for the Patriots.

As for the quarterback position, I actually have the Patriots trading back into the second round to take Stanford’s Davis Mills who they met with in the ore-draft process and really liked. Milks has a limited body of work but he has terrific physical tools and starter potential if given time to develop.

In terms of the rest of the class, the Patriots drafted versatile players in Newman, Felton, Hayes and Cooper. They added size to the middle of their defense with Tonga and they added potential future starters in the secondary with Samuel Jr. and Lenoir.

Trading down. The two words every Patriots fan hate. However, when you look at this mock draft, the Patriots traded down, picked up a second round pick from the Colts and add two impact defenders at the top in Collins and Moehrig.

The Patriots used the second round pick they got from the Colts to draft Kyle Trask. Picking him here was a little high but according to sources, both Belichick and offensive coordinator Josh McDaniels seem to be high on Trask and see him as more than just a mid-round developmental talent.

The rest of this draft is similar to the other drafts. The focus was on wide receiver, cornerback and the offensive line. Belichick has drafted with an eye towards the future so the Patriots drafted along those lines.

A lot of research, film study and effort goes into compiling these mock drafts. I hope we are as close to what the Patriots will do as we can be.