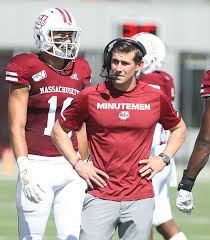 UMass kicks off spring practice today in Amherst and it an opportunity for the Minutemen to build on an 0-4 fall season.

The season of course was cut short due to COVID-19. After initially saying they wouldn’t be playing a fall season, administration opted to play in early October. The Minutemen played for games in November and lost all four of them. The only game that was remotely competitive was the Florida Atlantic game, a game UMass lost 24-2. The other three Minutemen losses weren’t remotely close.

Bell and his revamped staff have plenty to work on this spring. Here are five areas the Minutemen need to focus on in spring practice.

1. Get the new offensive coaches acclimated: The UMass staff underwent some turnover this off-season. Out is offensive coordinator and quarterbacks coach Angelo Mirando and in comes new quarterbacks coach Fred Walker. Walker has coached at Duke, Mississippi State, Murray State, Tennessee Tech and Troy. He brings a lot of experience to the staff.

Run Game Coordinator and Offensive Line Coach Alex Miller arrives from UNH. Miller replaces Micah James who left for Utah State. Miller played at UMass when times were good so he knows full what it is like to be a part of a successful program at the school. Miller will look to blend spread ideas with Bell’s desire to be more of a man-gap, power football team.

The offensive coaches hope to bring new ideas into a program that could use them right now.

2. Quarterback competition: The quarterback position is up in the air so there will be a competition between Zamar Wise, Will Koch and Garrett Dzuro to see who will be the starter in the fall. Koch and Dzuro got plenty of playing time this past fall. Wise could be in the mix but he is being used as an athlete right now. Highly touted incoming freshmen Brady Olson could also be in the mix in fall camp as well.

3. Young receivers must step up: The Minutemen suffered a big blow this off-season when wide receiver Sam Emilus announced he is entering the transfer portal. Replacing Emilus’ production will be tough but UMass has a group of quality young receivers that are ready to step up and fill the void.

Jermaine Johnson, Tray Pettway and Taj Jones are all capable replacements who can step in, develop this spring and make plays in the fall.

4. Defensive improvement: The Minutemen defense showed some improvement last season but there is still work to be done. An upgrade in talent and size along the defensive line has helped against the run. Added athleticism in the secondary means UMass can match up against more explosive teams. Despite the infusion in talent, more needs to be done if UMass is going to be respectable on defense.

Defensive coordinator Tommy Restivo is a good coach who comes up with some good schemes on a weekly basis. He will be doing a lot of experimenting this spring to see what he has and what he can do schematically.

5. Develop an identity on offense: Bell said at the beginning of last season that he wanted to be more of a power football team. We saw a little bit of that last season but the Minutemen didn’t really have the off-season necessary last year to implement some of the man-gap concepts Bell wants to implement.

That is why this spring is so vitally important for the Minutemen offensively. If UMass is going to be more physical offensively, they need to develop that identity this spring. The talent is there now. It is time to put it all together on offense.

The 15 practices UMass is going to get this spring are vitally important to the development of the program. If the Minutemen are going to make any meaningful progress in 2021, it starts this spring.