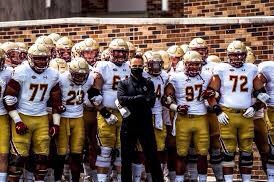 Saturday was a big day at The Heights.

For the first time since deciding to pass on an opportunity to play in a bowl game, the entire BC football team was back together for the first day of spring practice.

This one felt significantly different for the Eagles compared to a year ago. At this point in 2020, coach Hafley was trying to learn names, begin navigating through a pandemic and decide who his starting quarterback was. Entering the start of the 15-practice schedule on Saturday, Hafley acknowledged that this one felt much different.

Not only does everyone know who the starting quarterback is, but they know the system, they know the coaching staff, they know each other and most importantly they know what’s required protocol wise to make sure things can continue progressing forward.

“It is about getting their feet wet again, but just look at our offense for example,” Hafley said. “The whole line is back, this is year two in the scheme, there’s a starting quarterback whereas last year we didn’t know who our quarterback was going to be. The starting quarterback has been in the scheme, wide receivers at this point last year we didn’t know who who would step up, they’re back, so just watching our offense there’s a lot of guys where it’s not their first go around in this scheme.

“It’s different. There’s a different vibe. I feel confidence, I feel the team’s a lot closer, I feel the players and coaches are a lot closer whereas last year we were still getting to know everybody. There was a ton of energy.”

Zion Johnson also spoke on Saturday afternoon and echoed many of the same sentiments as his head coach.

That next level is something this 2021 version of the Eagles believes they are on the cusp of. Johnson acknowledged that’s why he and a lot of other guys decided to come back this season.

“We feel like we have a special group of guys here,” he said. “This spring we can really build upon what we did last season and really solidify ourselves and this class of BC football. We’re excited.”

There was also a bit of personal unfinished business for Johnson this season as well, which is why his return coinciding with the return of coach Matt Applebaum was special since Johnson started his collegiate career with Applebaum at Davidson.

“It feels awesome,” said Johnson. “It’s kind of crazy I started my college career with coach Applebaum and now I get to finish it with him. It’s a special thing, but for me I just had unfinished business. I feel like our team could be on a whole other level and with me coming back I want to help bring that fruition and there isn’t a coach I’d rather do that with than coach Applebaum so I’m fired up.”

While it was only one day and there are still 14 more practices, a spring game and then a full summer to continue building, one thing was abundantly clear on Saturday: the Eagles are not only embracing the continuous rise of expectations, but they’re adding their own too.

“All of the guys in the room, we’re on the same page,” added Johnson. “We want to strive for something special this year. We want to do something BC hasn’t done in a while.”