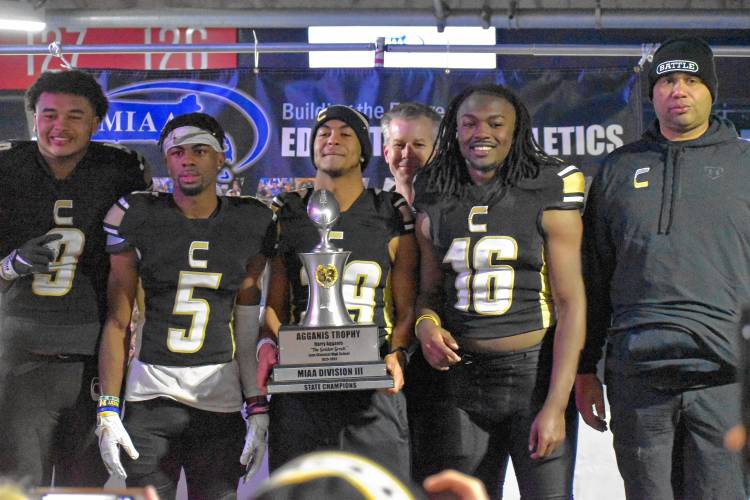 The Fall II football season kicks off on Monday February 22nd. After a year and half of no football, student athletes in Massachusetts will be hitting the gridiron once again.

Our next preview is focuses on Division 3 which is home to some of the best programs in the state in Springfield Central, Duxbury Tewksbury.

Here are my thoughts on Division 3.

1. Springfield Central will once again be the standard in Division 3. Coach Valdamar Brower has built a powerhouse with the Golden Eagles winning back to back state titles. Quarterback William Watson, running back Marcus Crawford and defensive end Terry Lockett are three of the best prospects in the state.

2. Duxbury lost to Springfield Central in the D3 Super Bowl but coach Dave Maimaron will have the Dragons ready to contend again despite losing some key pieces from that 2019 team.

3. Stoughton will be a player in D3 South thanks to the Brothers Ais. Christian and Christopher Ais are two of the best players in the Hock and they make the Knights the favorites to win the Davenport Division.

4. Perhaps no program in the state is getting as much attention right now as Milford. First coach Dale Olson inherits a team with a lot of talent and the addition of his nephew and UMass commit Brady Olson gives the Scarlet Hawks one of the top signal callers in the state. Milford has the talent to make some noise in the Kelley-Rex side of the Hockomock.

5. Hingham is coming off a good 2019 season but the Harborman still have to prove that they have arrived in the Patriot League as a legit contender. Mark Nutley and his staff are the right coaches to make this program consistently competitive.

6. Perhaps no program in this division has been as consistent in recent years as Tewksbury. Coach Brian Aylward has built one of the best programs in the state on toughness and multiplicity. Tewksbury is tough to coach against because of all the different things they do. It’s a testament to Aylward and his staff. Of course, it helps having a quarterback like Ryne Rametta, one of the more underrated signal callers in the state.

6. St. John’s Shrewsbury will once again be a force in Central, Mass but Wachusett, Doherty and Shrewsbury are also programs to keep an eye on in D3 Central.

7. Staying in D3 Central, Leominster is another program that could make some noise in this Fall II season. Coach Devin Gates has a lot of key pieces back most notably Kyle and Jack Philbin who are a force on the Blue Devils defense.

8. Long time powerhouse programs Walpole and North Attleboro are poised to bounce back in this Fall II season. Both programs are well coached and have young talent to build on.

9. Curious to see how Lynn Classical and Lynn English do this season. Both programs are coming off of winning seasons and have the talent to build on them.

10. Danvers will once again be a force in D3 North. The Falcons are bolstered by a strong offensive and defensive line led by two way lineman Ben Wilichoski, Evan Glynos and Andrew Chronis. The Falcons will be physical.