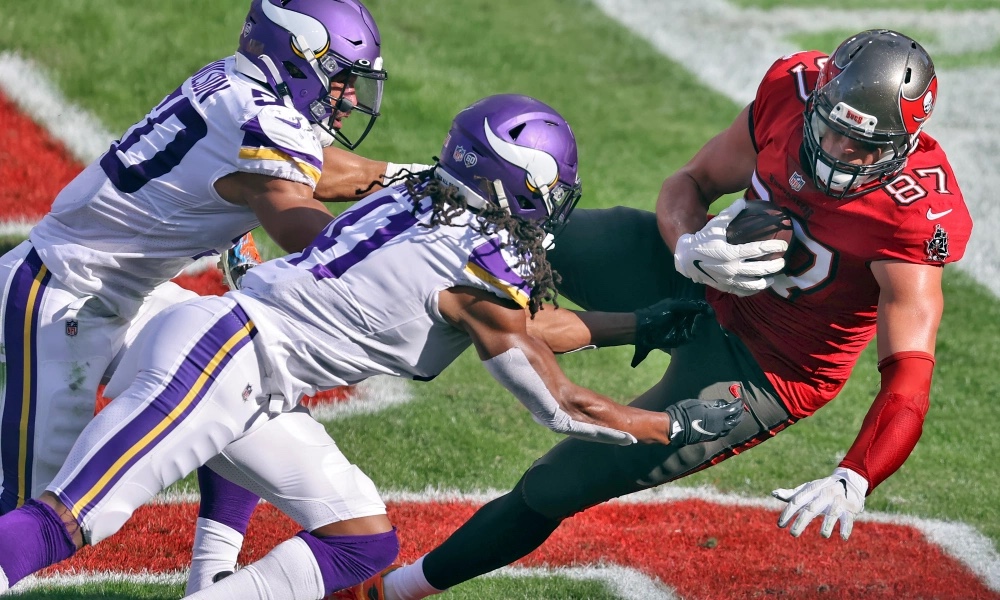 If you thought Bruce Arians would have his team ready to come out of the gate fast following a bye last week, what have you been watching?

As I suspected, the Bucs looked flat early against the Vikings on Sunday, going three-and-out on the first two offensive possessions of the game. However, thanks to four missed field goals, a missed extra point and downright putrid play from Kirk Cousins late in the game, the Buccaneers beat Minnesota 26-14.

The win moved Tampa Bay to 8-5 overall and kept them in the hunt for a home playoff game. With Green Bay continuing to hold on to the one seed and the lone bye in 2020, it looks like even if Brady and the Bucs go 11-5  – which they should with an easy final three games on the schedule – they’ll still be playing on Wild Card Weekend.

We didn’t learn much about Tampa on Sunday other than the defense is struggling and the offense still isn’t nearly consistent enough, but a win is a win in December.

“”I don’t really care what people say. I like the way we play football,” Arians defiantly said on Monday. “One of our major goals was to not let [Adam] Thielen or [Justin] Jefferson get over the top – I think they had a combined 80 yards. We’ll give up some runs to keep guys in front of us. Defensively, we whipped them in situational football. They were really good in the red zone [on] defense and offense, [but] we won both battles on both sides [and] we won third down – we were 60 percent and we got all those sacks [on defense]. I think we beat them in situational football.

“On defense, we missed 14 tackles. That’s the only negative thing about the whole day. I thought coming out, that was going to be a tough one – tackling [Dalvin Cook] and getting him on the ground. Other than that, I thought we played really, really well.”

Brady only threw for 196 yards and the offense looked terrible early on, but after a 1-yard TD run for Dalvin Cook in the first minute of the second quarter, Dan Bailey missed the PAT to keep it a 6-0 game and foreshadowed the remainder of the afternoon.

After a Bucs punt for the second consecutive drive to open the game, the Vikings drove downfield but Bailey missed a 36-yard field goal. Tampa responded with a 4-play, 74-yard drive that ended with Brady hitting Scotty Miller with an absolute dime for a 48-yard TD and a Ryan Succop PAT made it 7-6.

Minnesota followed with another missed field goal, this one from 54-yards out. The Bucs soon went up 14-6 on a 1-yard Ronald Jones TD run with just 44 seconds remaining in the half. The Bucs ended up getting the ball back, heaving a Hail Mary downfield that drew a pretty terrible PI flag and ended up taking a 17-6 lead into the locker room following a late 18-yard field goal.

“It was a good win,” said Brady. “We’re obviously going to need to just keep making progress. It was a good week of practice. Defense was on the field a lot. We didn’t convert on third down as much as we need to, but it was a good team win.”

Brady hit Gronkowski with a two-yard touchdown pass to cap a 9-play, 75-yard drive to open the third quarter, making it 23-6 after Succop missed the kick. Minnesota finally got in the end zone again on their next drive when Irv Smith hauled in a 14-yard TD from Cousins. The Vikings went for two and cut the deficit to 23-14 with 1:36 left in the third.

Tampa punted on its next drive, but Bailey missed yet another field goal on the ensuing Minnesota possession during the fourth quarter. The Bucs added a final field goal from Succop with five minutes to go before the Vikings had one final fumble on their last drive to complete a truly horrific day.

The Buccaneers continue to be one of the most roller coaster teams we’ve seen in a long time. Brady and the offense can score at will when they’re clicking, but with time running out before the playoffs, there is little room for error as we head into January. I still believe this team makes the Super Bowl, don’t be surprised – as we’ve stated for weeks now – if this team is one and done in the postseason.

“We take the field every week expecting to win, no matter who we’re playing,” Arians added. “Again, winning is hard in this league, so you better enjoy it when you can. You only get about 12 hours. It’s not like you can go out and celebrate anymore. You got to the backyard and have a drink and [then] get up and go on to the next one. The players get a couple extra – maybe 24 hours – the coaches don’t. This time of year, you’re happy as hell in the locker room. There’s a lot of relief and there’s a lot of enjoyment too.”