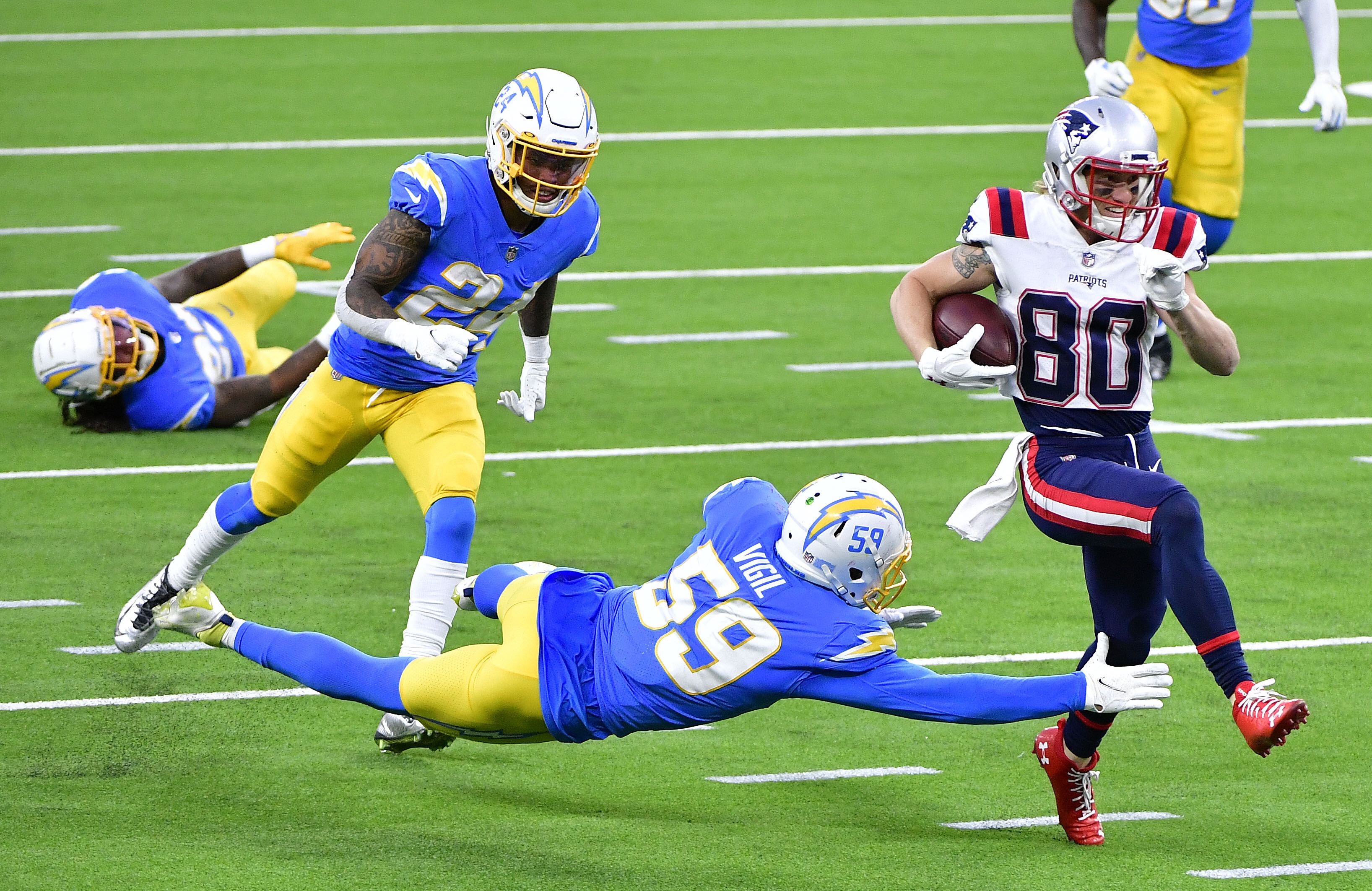 Raise your hand if you thought the Patriots would beat the Chargers by 45 points on Sunday.

Put your hand down. You’re lying.

New England’s special teams unit had two touchdowns, the defense gave up just 258 total yards while forcing two turnovers and Cam Newton only threw for 69 yards in the 45-0 shellacking. Hell, even Jarret Stidham and N’Keal Harry had touchdowns in this game.

It was Kevin, Gene and Feldman meeting Jerry, George and Kramer at SoFi Stadium in Los Angeles. Up was down, black was white and day was night.

The Patriots are now 6-6 but still have an uphill climb to earn a postseason berth. Indianapolis and Miami currently hold the final two spots with two-game advantages over New England with 8-4 records and four games to play. The Patriots do still play the Dolphins, but will most likely need to run the table and get a little help.

Still, Sunday was just another reminder to never doubt a Bill Belichick coached team when guys are buying in. The win over the Bolts was the fourth time Belichick has won a game by 45-plus points in his career, tying him with Tom Landry for most by a head coach since 1966. Belichick has also won a game in 50 NFL stadiums now, making him the only coach to do so.

“Coming across the country, these guys have really worked hard, had a good week of preparation, really put a lot into it,” Belichick said postgame. “We’ve had a lot of great leadership as always from our captains but, many of of out other veteran players and some of our younger players have really stepped up their preparation level as well.

“It was nice to see it all come together today. I thought we had a game where all three units contributed. It was a complimentary game. We had plays on offense, defense and special teams and played with a good level for 60 minutes.”

New England chewed up the first 7:10 of the game thanks in large part to Damien Harris (16/80) with a 13-play, 75-yard drive that ended with Newton punching it in from a yard out. After the Chargers missed a punt and the Patriots had to punt themselves, the New England defense quickly forced a three-and-out.

Gunner Olszewski followed with a 70-yard punt return touchdown a week after having one called back, making it 14-0 with 14:02 left in the half. With just under a minute to go, Newton capped a 16-play, 54-yard drive with a 2-yard run to put the Pats up 21-0.

Gunner had the second most punt return yards in a game in team history with 145, just 11 behind Mike Haynes in 1976 and also joined Stanley Morgan, Irving Fryar and Julian Edelman (twice) as the only Patriot receivers to return a punt for a touchdown and catch a TD in the same game.

“My old man, my brothers and my mom I’m sure, I’m sure they had a couple beers to celebrate, or a bottle of champagne or something,” Olszewski said when asked if there was anyone in particular he’d be celebrating his first NFL touchdowns with on Sunday night. “I’ll probably give them a call, make sure they saw it.”

Olszewski made sure one other stat didn’t get left out of his impressive day too.

“I had a tackle too,” he said. “Julian (Edelman) always talks about a game where he had a punt return and a tackle. That’s pretty cool to be in a company with those guys. I’ve followed Julian around quite a bit and tried to do things he did, so that’s pretty cool, that’s a special group so I’m honored.”

The first half fun wasn’t done yet either.

The Chargers took over at the LA 16 with 46 seconds to go. Seven plays later Justin Herbert (26-53/209/0 TD/2 INT)) spiked the ball at the Patriots 40, setting up a long field goal attempt. The kick was blocked by Cody Davis, scooped up by Devin McCourty and returned for a touchdown for a 28-0 lead.

“People asking what’s wrong with the kicking game, why haven’t we been making plays, and the key is to just stick with it,” said special teams captain Matthew Slater. “That was a huge play in the game. Cody and Justin (Bethel) work so hard to prepare on the little things like that, something like field goal block and you just never know when the play is going to happen. It was great to see Cody block it and Mr. Patriot scoop and score.”

Chase Winovich picked off Herbert on the first drive of the second half and the Pats soon went up 35-0 on a 5-yard TD catch by Harry. JC Jackson also came up with a pick on the next LA drive but the offense couldn’t take advantage. Nick Folk did make it a 38-0 game with 11:21 remaining on a 32-yard field goal.

After the Chargers turned the ball over on downs with 8:17 to go, Stidham (2-3/61/1 TD) needed just four plays before he hit Olszewski with a bullet over the middle from 38-yards out to cap New England’s 45-point day.

It was only one game against a poorly coached team – and the Patriots have a quick turn around with a much tougher Rams team on Thursday night – but for at least one Sunday afternoon in this wild 2020, it was good to have the dominant Patriots back.