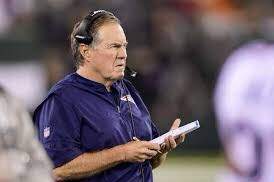 With WEEI in the midst of its “Giving Tuesday” fundraiser to help “K” cancer on Tuesday, we decided to hold off on the recap of Bill Belichick’s weekly OMF appearance until today.

Ordway, Merloni and Fauria had a much happier coach on Monday than they’ve gotten in recent weeks, but there was still a few of those awkward silence Bill moments that this interview is now known for, but it wasn’t nearly as contentious as it has been lately.

Ordway opened things up asking coach why they were finally able to close out a game where they had the ball late as opposed to the other times they’ve failed to come through in those situations during this strange year.

Next up on the docket was the defense – specifically in regards to keeping Kyler Murray’s running game limited – which Lou pointed out was extremely efficient at keeping him contained on Sunday.

“I thought our pass rushers did a good job,” said Belichick. He’s a hard guy to handle. He’s fast, he’s elusive when he gets out of the pocket. Overall, we tried to play him with good leverage and discipline but it’s definitely a challenge. They have good receivers, good backs and a good tight end, so there was a lot to handle there.”

Fauria soon took the first risky plunge, asking Bill about how his son Steven has grown into his role after Belichick openly acknowledged he’s calling plays during his postgame presser on Sunday. It was the first time basically ever the Bill had mentioned his son by name during a press conference.

Ordway soon followed with a question about Patricia and whether or not Belichick would be interested in bringing him back after being fired in Detroit.

“Yeah, I’ll tell you right now we’re focused on correcting the mistakes from the Arizona game and moving on to the Chargers,” he said. “That’s going to be a big challenge for us out there and then a short week with the Rams, so that’s where my focus has been the last few hours since the end of the Arizona game.”

It was Merloni’s turn to take a dive into the deep end with Bill, asking coach why Cam is still so entrenched in the starting QB spot after throwing just 84 yards against the Cardinals.

“Yeah, well, we’ve won three of our last four games, hopefully we can continue to play good football on offense, defense and special teams,” he said.

After spending some time on the odd penalties and lack of clarification that came up numerous times on Sunday, Bill was asked about the 4th-and-goal stop heading into halftime and how much momentum it carried.

“Yeah, anytime you have a seven-point play that’s a major swing in the game,” he said. “Everything was just right on that 4th-and-1 play. Just a great play by our players, we got some penetration at the line of scrimmage and Bentley made a good strong tackle there. A couple guys came in and helped push Drake back to keep him out of the end zone.

“That was a great defensive play. The players really stepped up to the challenge and made an impact play in the game there.”

Special teams was strong in this one and Fauria made sure to ask Belichick if this was about as good of an example as there is of complimentary football with the special teams and defense bailing out the offense.

“This was definitely our most productive game in the return game and our coverage team has been pretty consistent all year long,” he said. “For the most part our kicking has been consistent as well. This is the first time we had some explosive plays in the kicking game. We haven’t had those plays and it was certainly great to get them.

“It’s a big boost to the team and helps out the offense. It’s hard to drive the ball 80 yards consistently for any team. We were able to put the offense on a short field a few times and that was obviously a big help.”

Ordway brought up the Pats being fined for their Covid protocols despite original word being they had done everything right. Belichick slyly side-stepped it though, as you’d expect. Julian Edelman getting closer to a return, contingency plans for Covid issues in California and Justin Herbert all came up before wrapping up with the Mercedes Benz Question of the Week.

This week was about Sarah Fuller, the girl from Vanderbilt who became the first female to kick at a Power 5 school. It took about 20 minutes, but better late than never for some classic Bill Belichick awkwardness.