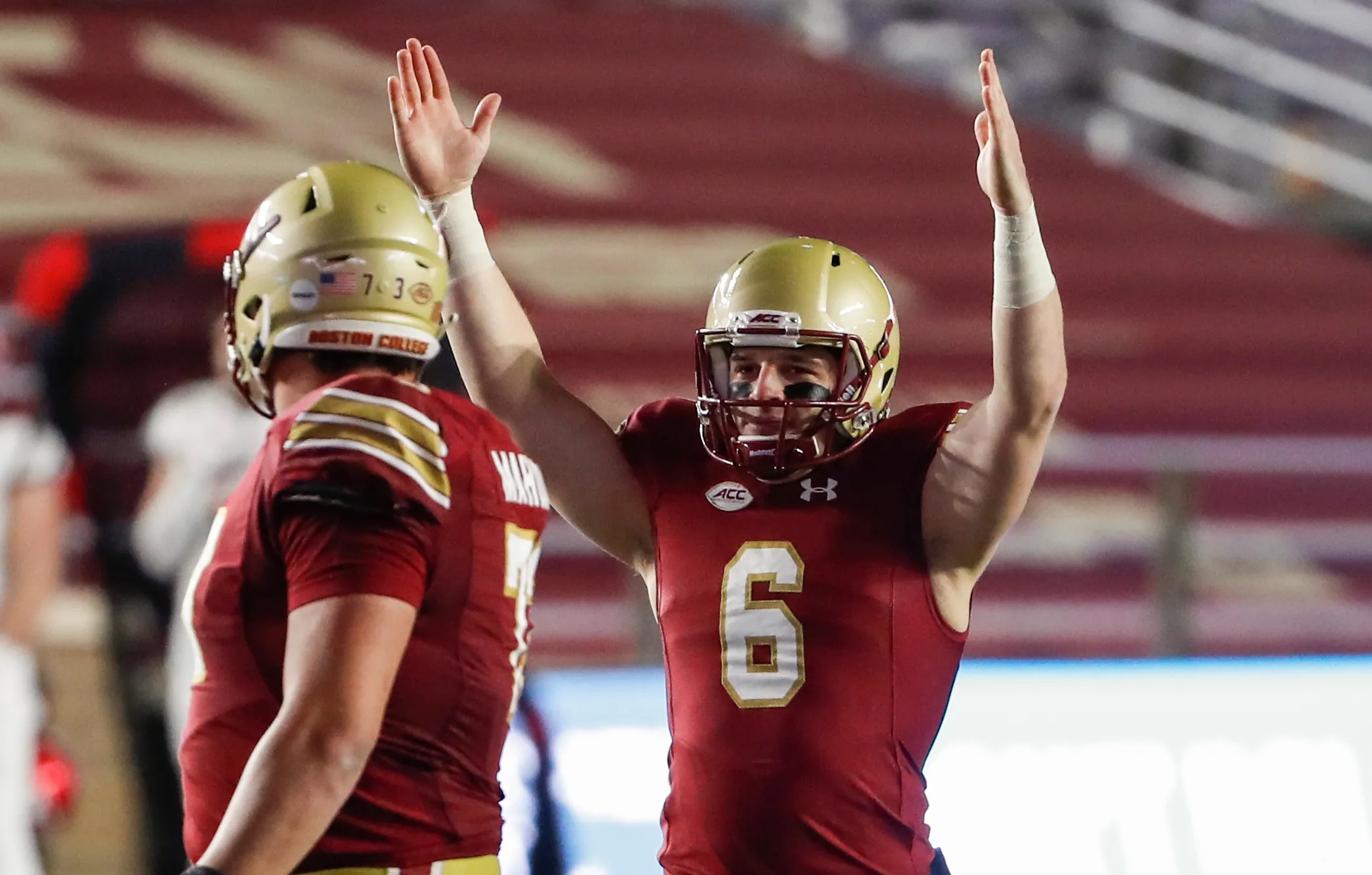 CHESTNUT HILL — All season long, Boston College head coachJeff Hafley has said he loves this 2020 team because of its selflessness and willingness to put the team first.

On Saturday morning, the Eagles got word their latest round of Covid tests – now up to 8,000 since June – were once again negative. Hours later in the final home game of 2020, backup quarterback Dennis Grosel was suddenly forced to spring into action when Phil Jurkovec went down with a knee injury.

Grosel didn’t take a snap all week in practice, but still threw two touchdowns, helping the Eagles to a 34-27 win.

Boston College (6-4, 5-4) is now bowl eligible with one game left in Virginia next weekend. This was about far more than just wining though, as Grosel’s moment magnified that selflessness Hafley has spoke of all season long.

“I think what you saw tonight was again…it was pretty emotional (in the locker room), you could see it on the guys faces,” Hafley said postgame. “You could see how much they care and love each other. Obviously, we lose Phil and Dennis comes in. I told the team it’s what life is all about. The starting quarterback gets beat out, yet he comes to work every day, one of our best leaders, never complains, never says a word. All he does is prepare.

“When his time came he took the game over and he made huge plays. It’s such a good example for our younger guys to see. That’s football and that’s life. You might not like where you are right now but just keep working because your time will come.”

The Eagles led 20-13 with 6:23 left in the third when Jurkovec went down following the first play of a drive that started at the BC 32. Prior to taking the field, Grosel was taking snaps on the sideline with Alec Lindstrom and had an encouraging outlook.

“Dennis doesn’t know it, but I heard him say to Alec ‘hey man, it’s like riding a bike,’ and they kind of looked at each other and laughed,” said Hafley. “When Dennis went in the huddle I was right there. The confidence Dennis had and the confidence they had in him is because they see him work and know what type of kid he is. That’s what’s special about this team.”

BC had to punt on the first drive with Grosel in, but after a Louisville punt, a 44-yard run down the BC sideline on the ensuing drive in the waining moments of the third quarter sparked the Eagle sideline as they erupted.

“Getting into the game, getting the guys fired up, it was a big play,” admitted Grosel.

The drive ended with CJ Lewis making a ridiculous one-handed catch for an 11-yard touchdown, putting BC up 27-13 with 13:40 to go. A 4-yard touchdown catch from Tutu Atwell 11 plays later tightened things up at 27-20.

A big return from Travis Levy on the kickoff gave the Eagles the ball at their own 44. Grosel needed just five plays to get in the end zone, hitting Jelhani Galloway for a 21-yard TD over the middle to push the lead back to 34-20 with 4:36 to go.

The Cardinals and outstanding quarterback Malik Cunningham (19-31/294/2 & 135 yards rushing)) answered again, this time with a 69-yard screen pass for a TD on the first play following the kickoff. Both teams traded punts after that and Boston College finally sealed the game with an interception from Shita Sillah.

“I was feeling good coming in and ready all year if Phil were to go down,” said Grosel. “I hope he’s doing alright, but just kind of came back in, was able to do my thing and it was good to have the experience (of coming in last year for Anthony Brown) to fall back on against Louisville again.”

Louisville went up 3-0 early but Jurkovec led the team on a methodical 11-play drive only to fumble at the 2-yard line. The Cardinals quickly gave it back when Deon Jones recovered an Atwell fumble. Seven plays later David Bailey (10/53/2) rumbled in from eight yard out for the 7-3 lead.

Early in the second quarter Jahmin Muse forced a fumble that was recovered by Cam Horsley at the BC 44. The ensuing 12-play drive ended with an Aaron Boumerhi 22-yard field goal, but Louisville quickly answered again to make it 10-10.

The Eagles eventually took a slim 13-10 lead into the half and then pushed it to 20-10 on a quick six-play march to open the third quarter, ending with a Bailey 2-yard run. The Cardinals responded with a field goal before Jurkovec went down, putting the wheels in motion for a remarkable story.

Prior to the game, the Boston College seniors were honored as best they could be in this strange year, running through a tunnel of teammates before eventually giving Hafley a big hug at the endow it. Players’ families introduced them on the video boards, and even the often stoic Max Richardson decided to have a little fun, pulling out the Ray Lewis dance before he sprinted through his teammates.

“Someone said in the locker room pregame, I think it was Marcus (Valdez), was that ‘“families can’t be there to watch the seniors run out, but it’s been a football family all along and it’ll be a football family today,” said Grosel. “That was the biggest thing. Seeing the guys emotionally attached and having each other’s back and hugging the guys after the game is something I’ll never forget.”

Back in March the Eagles didn’t even know if they were going to have a season. Nearly nine months later, Boston College was able to celebrate quite a few special moments on Saturday, a day that no one wearing or supporting maroon and gold will forget for quite sometime.

“I told the team after mass, I told the seniors how important this was for them,” Hafley added. “I talked about this isn’t ideal, your senior day, no one in the stands, mom and dad not allowed to be there and I told them how proud I was of them in a world right now everything is really hard, and they’ve done the opposite of most people. We’ve stayed healthy. Over 8,000 tests. They’ve led this team to a 6-4 record.

“Right before we went out on the field I had them stand up and said “we will not lose this football game, there’s no way.”