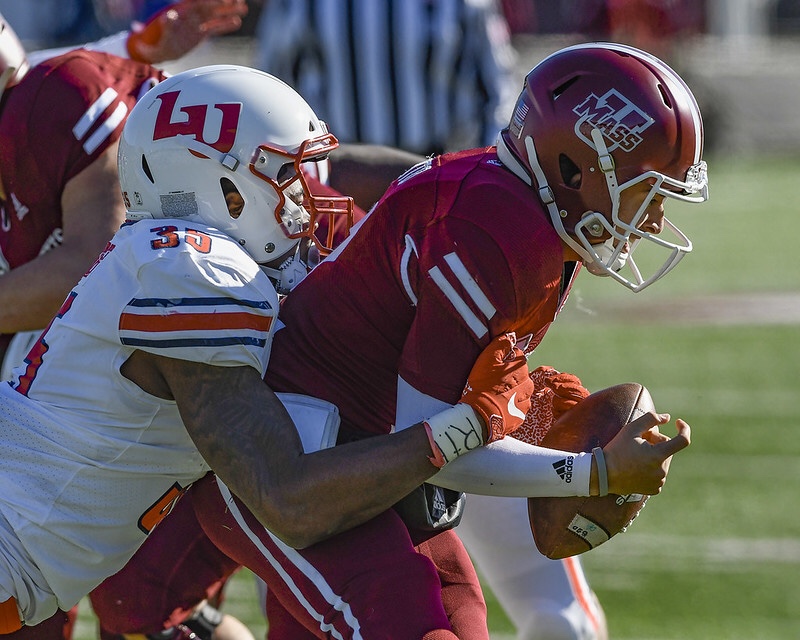 Opening Kickoff: The Minutemen wrap up their season today when they travel to Lynchburg, Virginia to take on the high flying Liberty Flames.

The Minutemen are massive underdogs despite showing improvement last Friday night in a 24-2 loss to FAU.

This is the third meeting between the Minutemen and the Flames. UMass beat Liberty 62-59 in a wild game in 2018 but the Flames returned the favor last season trouncing the Minutemen 63-21.

Liberty is coming off their first loss of the season last week losing 15-14 to N.C State in the closing seconds. Head Coach Hugh Freeze has done a tremendous job of building a program at Liberty. A program that has been ranked most of this season.

UMass will have their hands full today and will need a lot to go their way in order to pull off the upset.

Here are three offensive and defensive keys for the Minutemen.

1. Ball Control: The Minutemen need to run the football and control the clock. They need to shorten this game if they want to have any chance of pulling off the upset.

3. Convert on 3rd Down: UMass needs to find a way to extend drives. It has been a problem thus far in this abridged season. If they cannot stay on the field offensively, they cannot take pressure off the defense.

1. Slow down Malik Willis: Good luck. The Minutemen will have to get the same amount of pressure they did last week but they will need to account for Willis more as a passer. Defensive Coordinator Tommy Restivo may not be able to be as aggressive as he was last week.

2. Force turnovers: The Minutemen forced two last week but that won’t be enough. They will need as many possessions as possible to compete in this game today. If the defense can generate some turnovers, the Minutemen could hang around in this game.

3. Don’t get overwhelmed: The Minutemen got some early stops on defense last week and it enabled them to stay on the game. They must find a way to do the same thing today against a much more explosive offense that is also balanced.

Final Prediction: Liberty 55 UMass 14: The Flames hung 63 on UMass last season and they are better this season. The only reason they won’t match last season’s point total is because Freeze will take the foot off the gas in the fourth quarter.