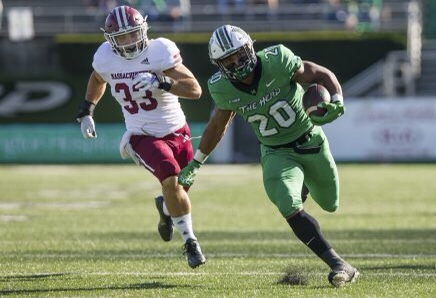 HUNTINGTON. W.V- It wasn’t pretty but the UMass Minutemen showed some improvement in a 51-10 loss to Marshall.

UMass was competitive in the first half which is impressive considering they have 22 true or redshirt freshmen on the depth chart. Despite playing better than they did against Georgia Southern, they still trailed 31-10 at the half. The Minutemen got out scored 20-0 in the second half but there were some positives to take away from this game.

The Minutemen’s two scores came in the first half and they used some trickery to get on the board. A 37-yard flea flicker from freshmen quarterback Will Koch (12-18, 99 yards, 1TD) to tight end Taylor Edwards, along with two 15-yard penalties against Marshall led to Koch tossing a 2-yard touchdown pass to Samuel Emilus. Freshmen running back Jared Cole threw a 25 yard pass to quarterback Josiah Johnson a on a halfback toss pass.

Defensively, it was a different story. The Minutemen once again struggled to get off the field. Tackling was an issue especially along the front seven.

While the Minutemen played better in spots and they may have found their quarterback in Koch, they still have a long way to go before they are competitive. Let’s not forget however. This season is about development, not winning games.

As of now, the Minutemen’s next game is on November 27th at Liberty. The Flames upset Virginia Tech yesterday 38-35 on a last second field goal.