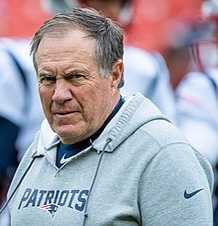 The Patriots are now under .500 through at least five games of the season for the first time since 2002.

So, when Bill Belichick met with Glenn Ordway, Lou Merloni and Christian Fauria for his weekly appearance on WEEI on Monday, it was sure to be all sunshine and rainbows, right?

We got the good old sarcastic Bill back for a good chunk of this week, and credit to the guys for continuing to follow up on questions that he tried to brush aside with wise-ass remarks.

Here’s what stood out this week:

Ordway opened asking if another strange week of practice and Covid issues meant that the playbook was limited during the Denver game.

Lou hopped into the deep end of the Bill Belichick sarcasm pool when he asked whether or not the team is starting to feel a bit more comfortable with how things are operating with Covid.

“Um…yeah. I don’t know. I mean, I guess so,” Belichick muttered.

Five seconds of fantastic awkward silence followed before Ordway asked coach what his thought process was when New England decided to go for two so early in the loss. Belichick’s response was basically what you’d expect.

“Yeah, convert it and make it a seven-point game,” he said. “Ordway pushed it a bit more and Belichick continued to be a hard ass about it. “Of course we thought the play would work, that’s why we called it,” he said. “But, it didn’t so…”

Wise ass Bill was just getting warmed up as Merloni soon asked him about the failure to challenge a critical James White spot during Sunday’s failed comeback.

Bill was asked about the patchwork offensive line having to adapt on the fly again on Sunday with more injuries. Belichick was a bit complimentary, but, clearly wouldn’t extend himself after such an ugly overall team performance.

“Yeah, it certainly hasn’t been an ideal situation,” he said. “But, all things considered I thought those guys hung in there and played competitively. Hopefully we can get more consistency and play better here going forward.”

Fauria brought up the Red Zone defense holding Denver to six field goals, and once again Bill wasn’t very complimentary of the effort.

“It’s a little bit harder down there for the offense with less space to work with,” he said. “We work on it a lot, it’s an important part of the game for us. The players generally do a good job of preparing down there.”
The stuff everyone was truly waiting for came out later in the interview as Bill was asked about Jimmy G and the 49ers coming to town. As expected, Bill couldn’t help but hype up his former backup.

“Jimmy’s a good quarterback, he took them to the NFC championship last year, he won the NFC championship,” said Belichick. “He’s certainly been able to have a high level of achievement. They signed him to a contract that shows they have confidence in him as their quarterback. I don’t think any of that is all that surprising. I think we all know Jimmy’s a good player.”

After a bit more 49ers talk it was time for the Mercedes Benz Question of the Week to wrap things up. This one was interesting as Fauria asked coach Belichick if he thought Tuesday Night Football could possible replace Monday or Thursday Night Football in the future.

“Tuesday to Sunday is definitely better for the players in terms of recovery and preparing for the game,” he said. “But, in the end, that’s all over my head. I’m worried about coaching our team and trying to prepare them for San Francisco. We’ll leave the scheduling to all the experts. When they schedule them we’ll be there and we’ll play them.”