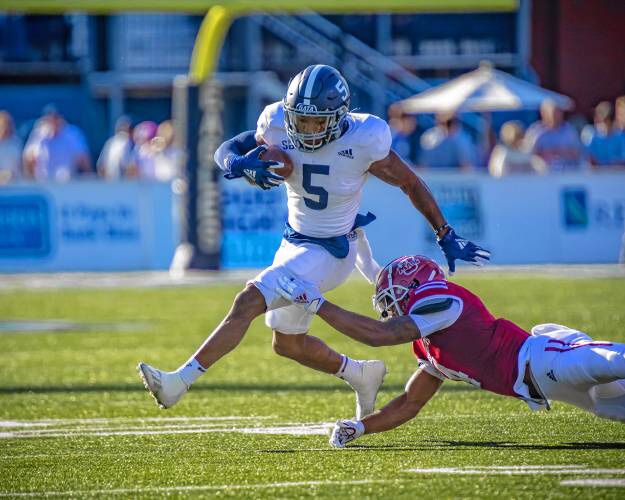 STATESBORO, GA: UMass finally made their long awaited 2020 season debut against the Georgia Southern Eagles and despite it being a new season, the results were the same as last season for the Minutemen in a 41-0 loss.

Despite getting blown out. Minutemen head coach Walt Bell was just glad to be out there. “Obviously the result is not what we wanted but just to get to this point, just really proud of our kids. Proud of our administration and everything they’ve done to give us the opportunity to play football.”

UMass only had about ten days to get ready for this game. It showed on the opening drive as Georgia Southern went right down and scored. The Minutemen just didn’t seem to match up physically and Bell admitted as much.

“There’s a speed aspect to (their offense) that you don’t catch up to until a drive or two into the game, You just do everything you can and hope you survive it. We didn’t help the defense very much offensively, which kind of made matters worse knowing those guys were out there for a while.”

The Minutemen offense struggled as well accumulating only 191 yards of total offense. Redshirt Senior Mike Fallon got the start and completed only 7 of 12 passes for 41 yards and an interception. Josiah Johnson and Will Koch also played but they weren’t any more effective than Fallon.

Bell did say that depending on when UMass plays next, there’s a chance all three quarterbacks could play again. “Moving forward depending on who are next opponent is, you’ll probably see all three of them again.”

Transfer running back Ellis Merriweather had a debut to forget carrying the ball 16 times for 21 yards. Koch actually led the Minutemen with 41 yards rushing.

“I honestly in my heart thought we would run the football better, but need to watch the tape to kind of find out what the ills were,” Bell said.

UMass is shifting philosophically on offense. Bell wants to be more of a blue collar, power football team. He acknowledged however that the offense needs to be better.

“The biggest thing moving forward is we have to find a way to be more productive on offense to keep our defense out of bad situations.”

It is unclear when UMass will play again. Athletic Director Ryan Bamford said the school wants to play four to six games but they don’t have a game scheduled as of right now.