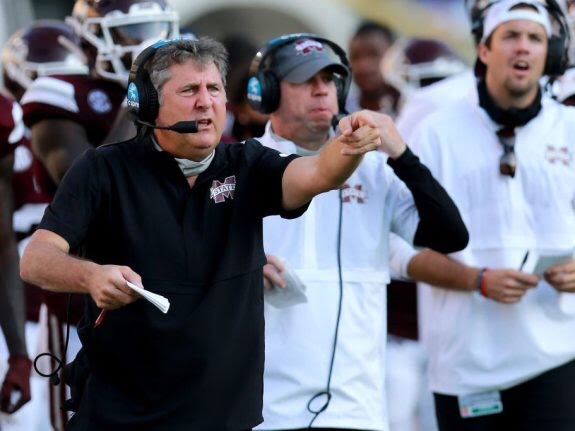 The Air Raid. An offensive system synonymous with scoring. A system that has taken the football world by storm the last 25 years.

Perhaps the biggest difference between the Air Raid and a traditional spread offense is the role of the quarterback. In the spread, the quarterback is a dual threat that can impact a game as a runner and as a passer.

In the Air Raid, the quarterback is a pure passer. Just like in the West Coast and the Run & Shoot. They are passers first and their job is to throw the football above all else.

Philosophically, the Air Raid has its roots in the West Coast Offense. The so called “Godfathers” of the offense Hal Mumme and Mike Leach visited BYU frequently in the late eighties to study the offense. Leach is a BYU grad so he studied Lavell Edwards offense extensively while at the school.

In 1989, Mumme hired Leach as his offensive coordinator at Iowa Wesleyan. The two men began crafting the Air Raid by basing on the West Coast concepts of Edwards and BYU. Like BYU, they threw the ball a lot but unlike BYU, they began experimenting with shotgun and three and four receiver formations. They also began using three foot splits with the offensive lineman. This enabled them to spread the field sideline to sideline.

In 1992 the two men left Iowa Wesleyan for Valdosta State in Georgia. It is there where the two men started garnering national attention for their high flying system. After four years at Valdosta, Mumme got his big break when Kentucky hired him as head coach.

At Kentucky, Mumme and Leach continued to run the offense they ran at Iowa Wesleyan and Valdosta but once they landed highly touted quarterback Tim Couch, that’s when the Air Raid began to deviate from the West Coast offense conceptually to more of a Run and Shoot offense. You see the transition in the following diagrams. 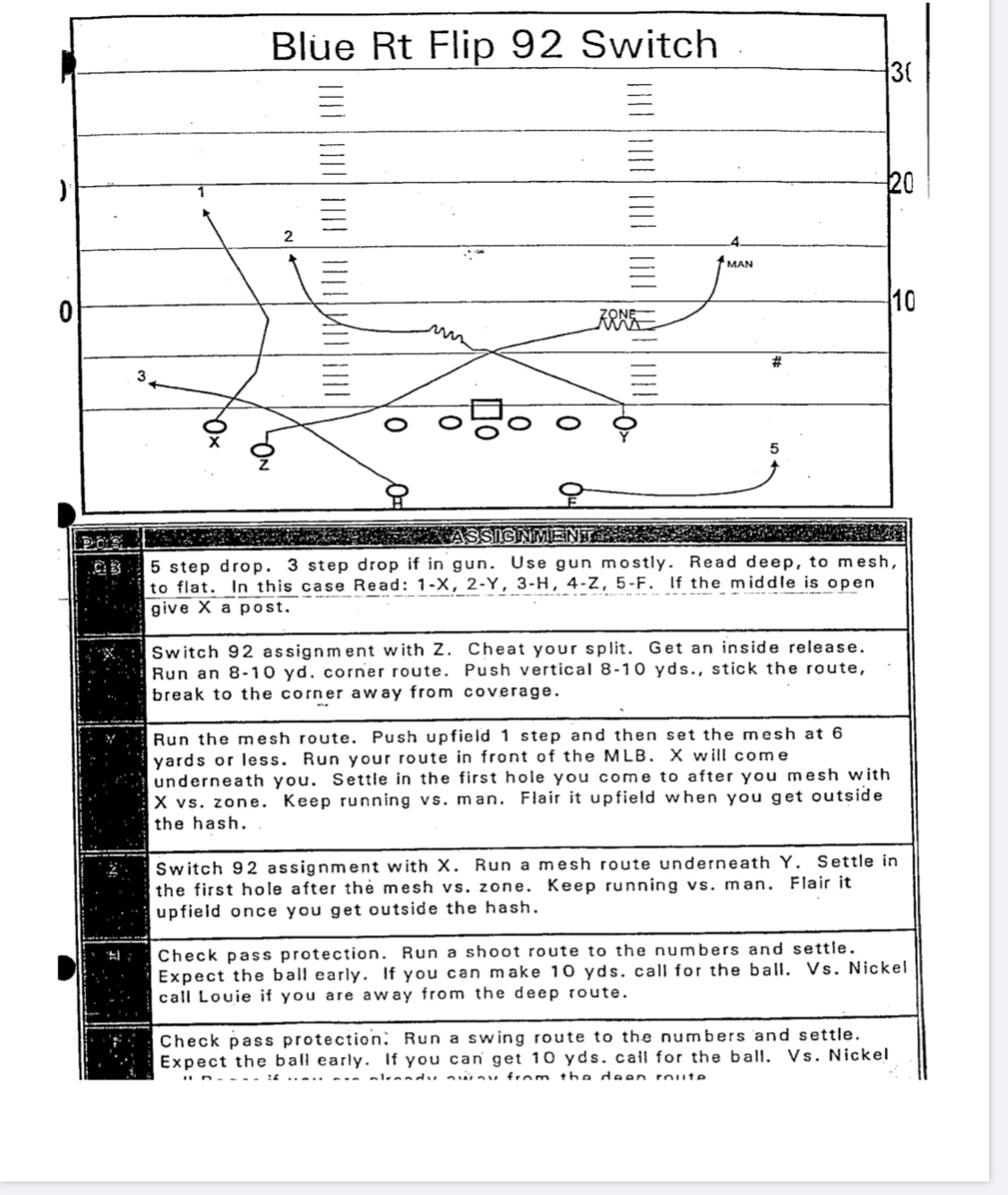 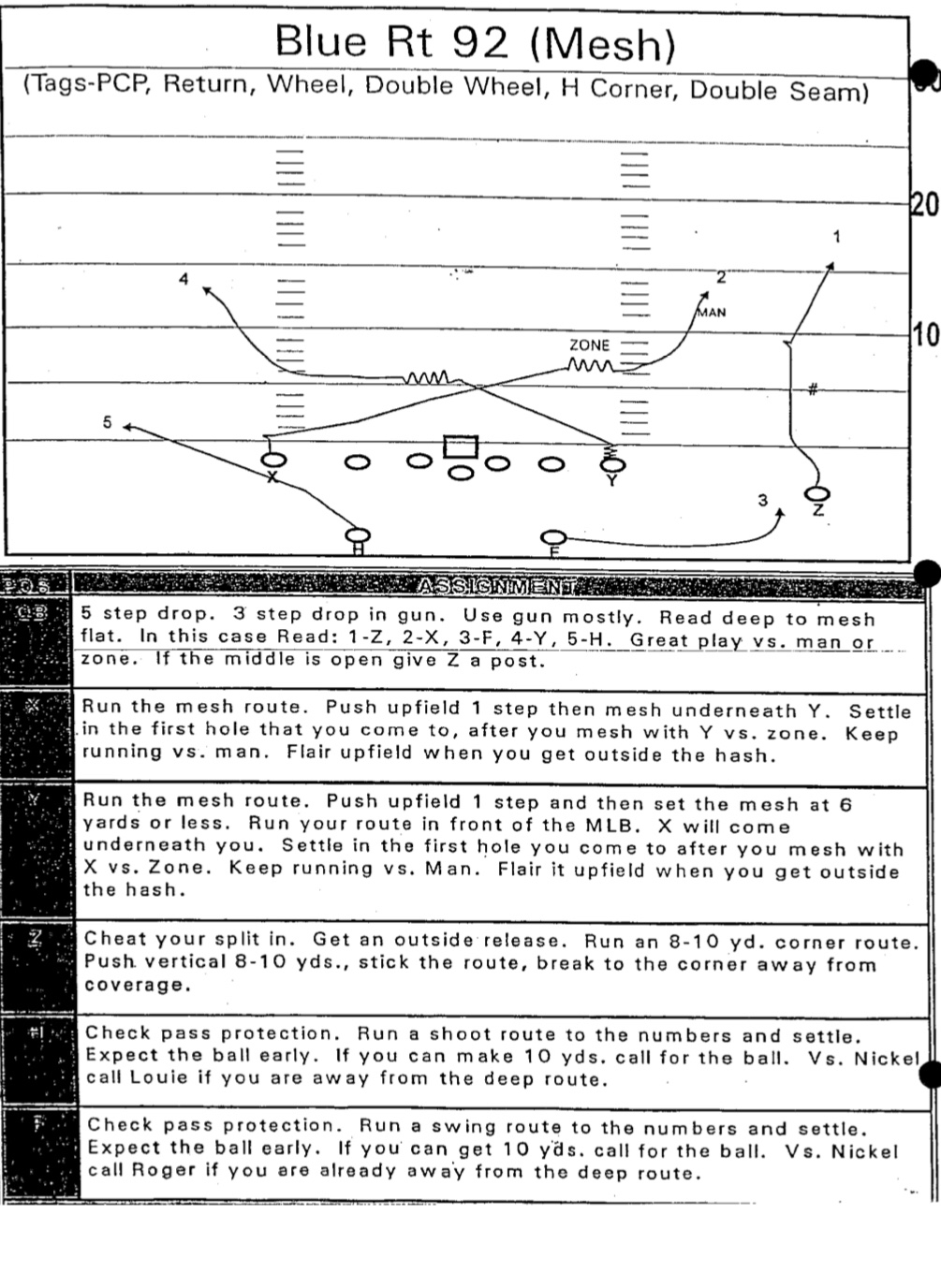 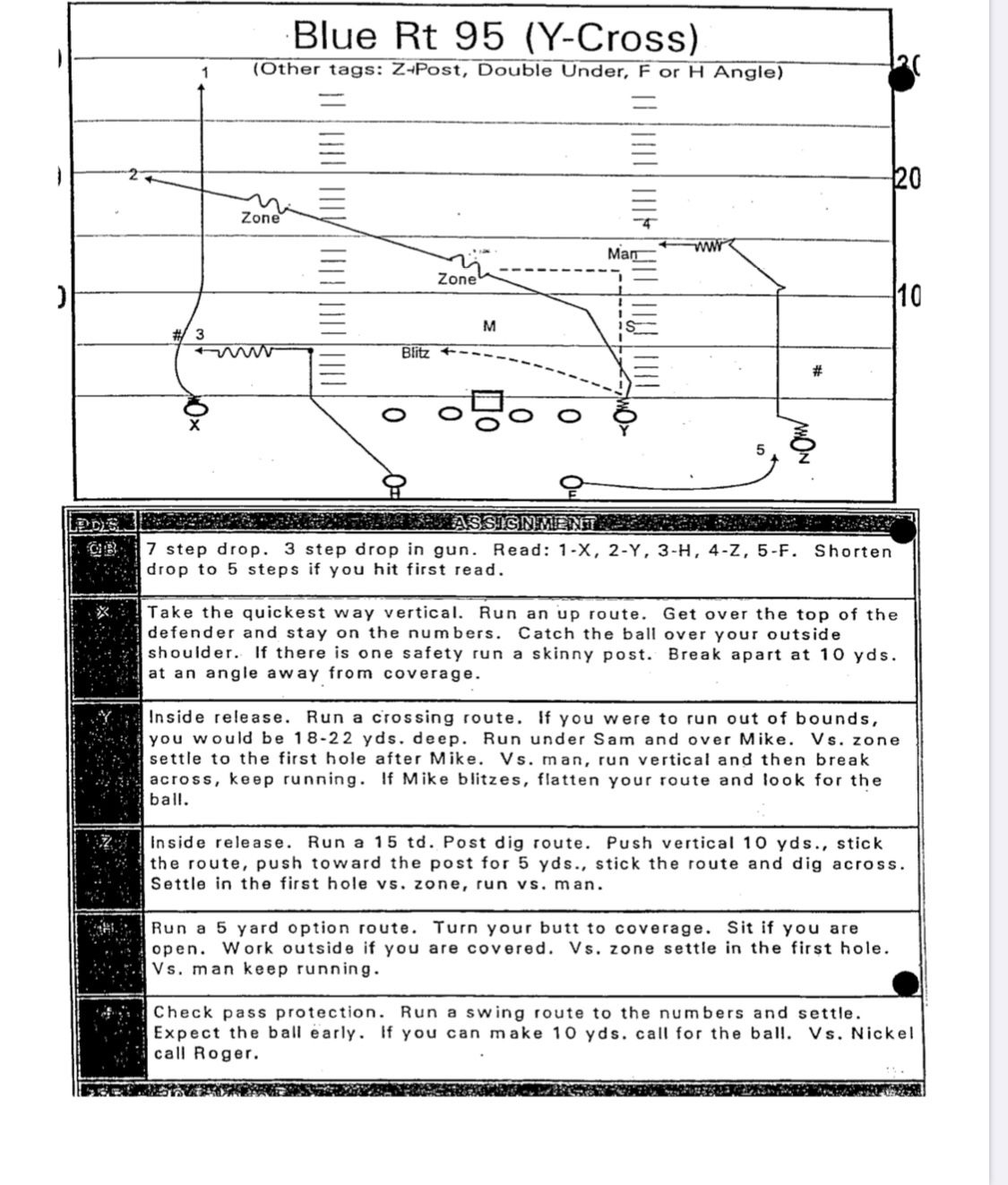 In the beginning of their time together, Mumme and Leach wanted to run the West Coast offense but a lack of elite level skill and the inability to protect the quarterback forced them to spread out, incorporate the shotgun and widen the offensive line’s split. The Air Raid was born.

Mumme and Leach took the concepts of the West Coast Offense and blended them with the Run and Shoot. Add the shotgun, empty formations and tunnel screens and what you have is a revolutionary system that had never been seen before.

You can see both of these systems being blended in this Tim Couch highlight video from 1997.

In 1999 Leach left Kentucky to become offensive coordinator at Oklahoma. The Sooners went from 11th in total offense in the Big 12 in 1998 to 1st in Leach’s lone season in Norman.

After one season at Oklahoma, Leach was hired at Texas Tech and over the course of the next nine years, Leach took the Air Raid to the next level and turn into the system we know today.

The system which has allowed quarterbacks Kliff Kingsbury, Sonny Cumbie, Graham Harrell, Patrick Mahomes and Gardner Minshew to break records has gone from a pass happy system to now becoming a system which develops quarterbacks.

The best part of all, Leach has simplified the system and is unabashed about throwing the ball. He has 10 to 12 pass concepts and 6 to 8 run plays. That’s it.

Leach does all this out of three formations most of the time. 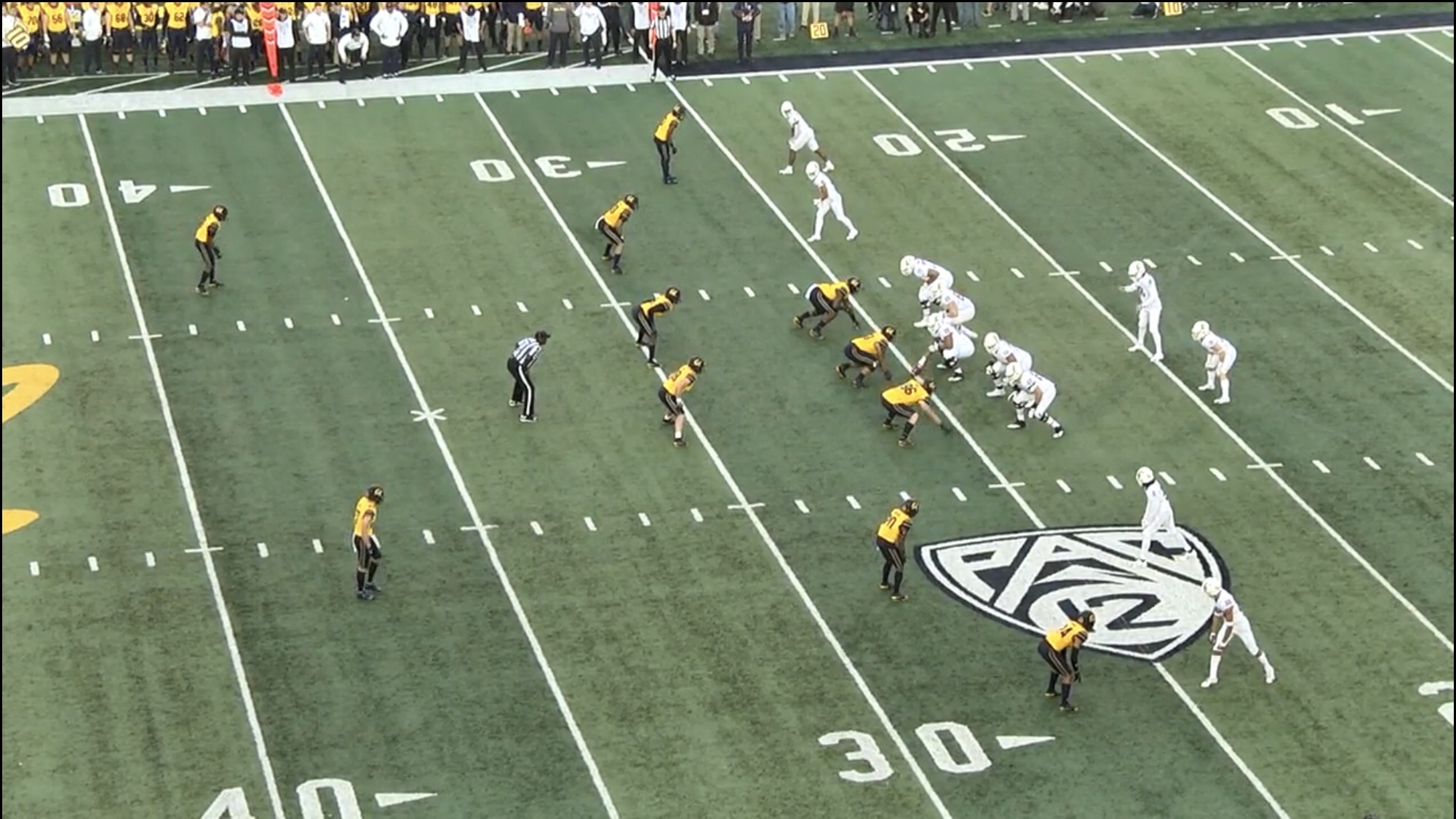 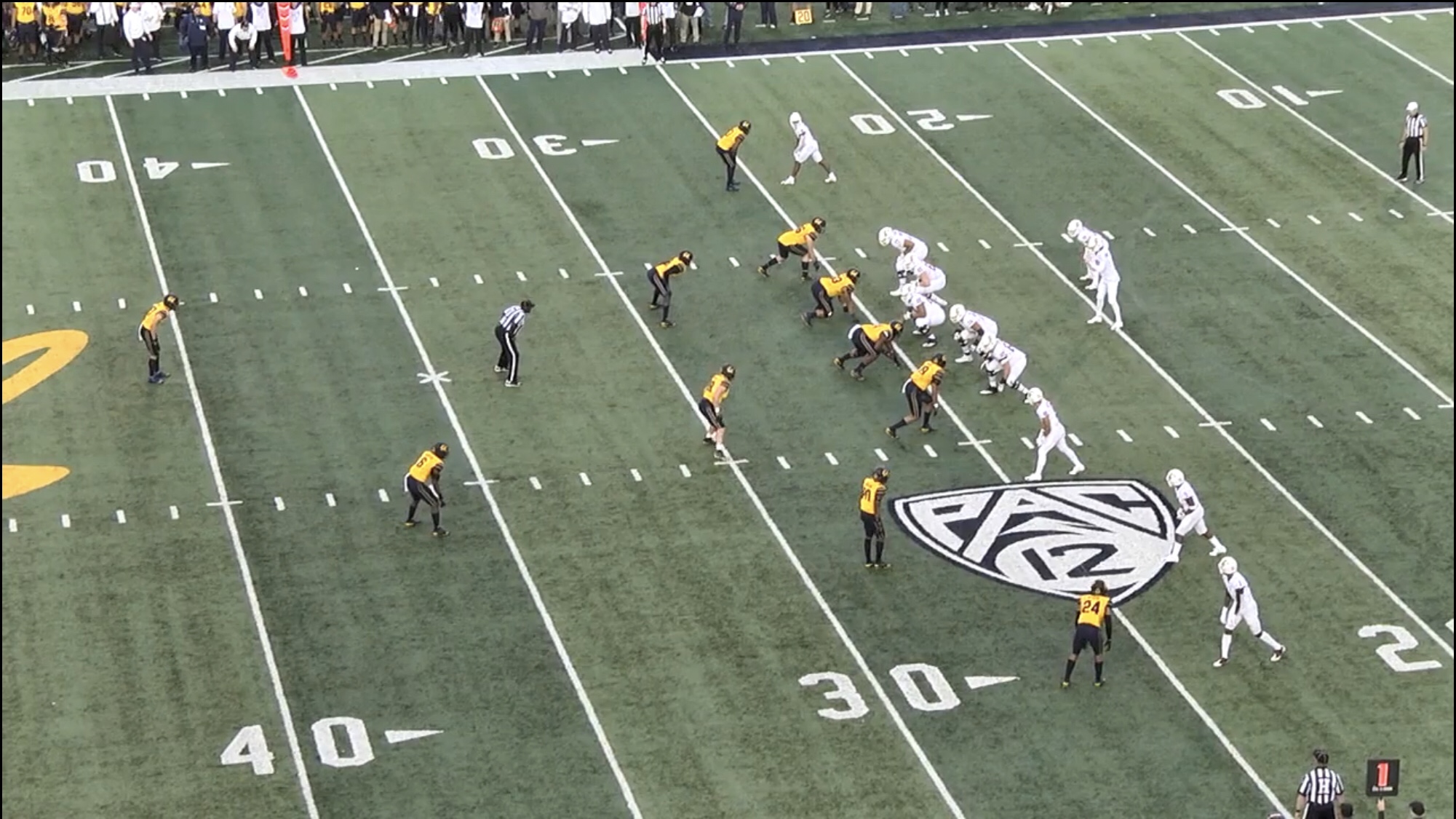 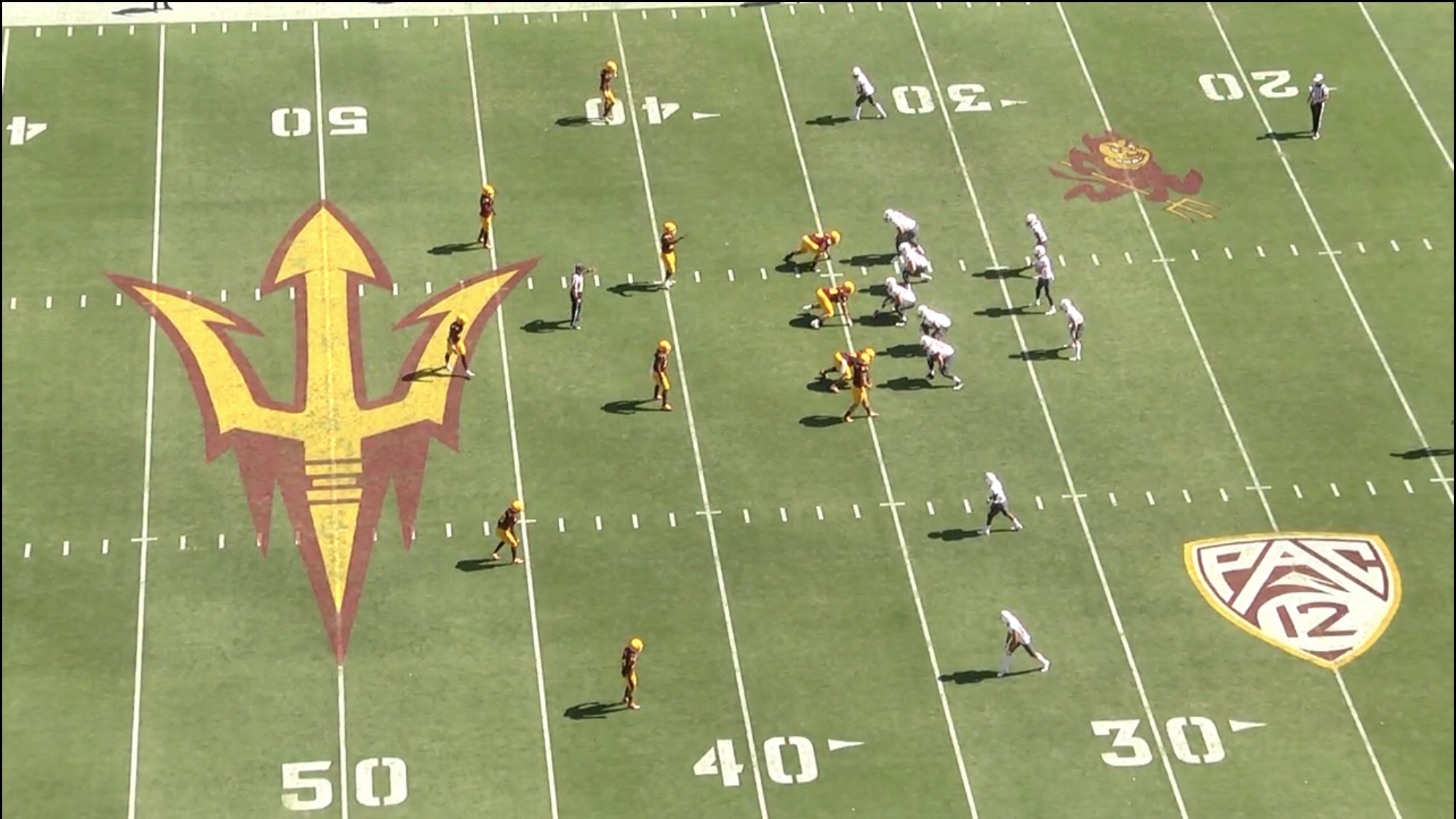 He runs Gun Doubles as a balanced formation out of 10 and 11 personnel. Gun Three Trips is primarily an 11 personnel formation because Leach likes utilizing the tight end as the up receiver. Finally, when Leach wants to run the football and get a lead blocker in the game, he will go 11 personnel and run Gun Split.

Leach utilizes other formations as well but these are his base formations that he likes to use the majority of the time.

Despite the use of spread formations and the blending of the Run & Shoot when it comes to route adjustments by the receivers, the Air Raid passing game is still a West Coast offense passing game.

Here are three examples of this. 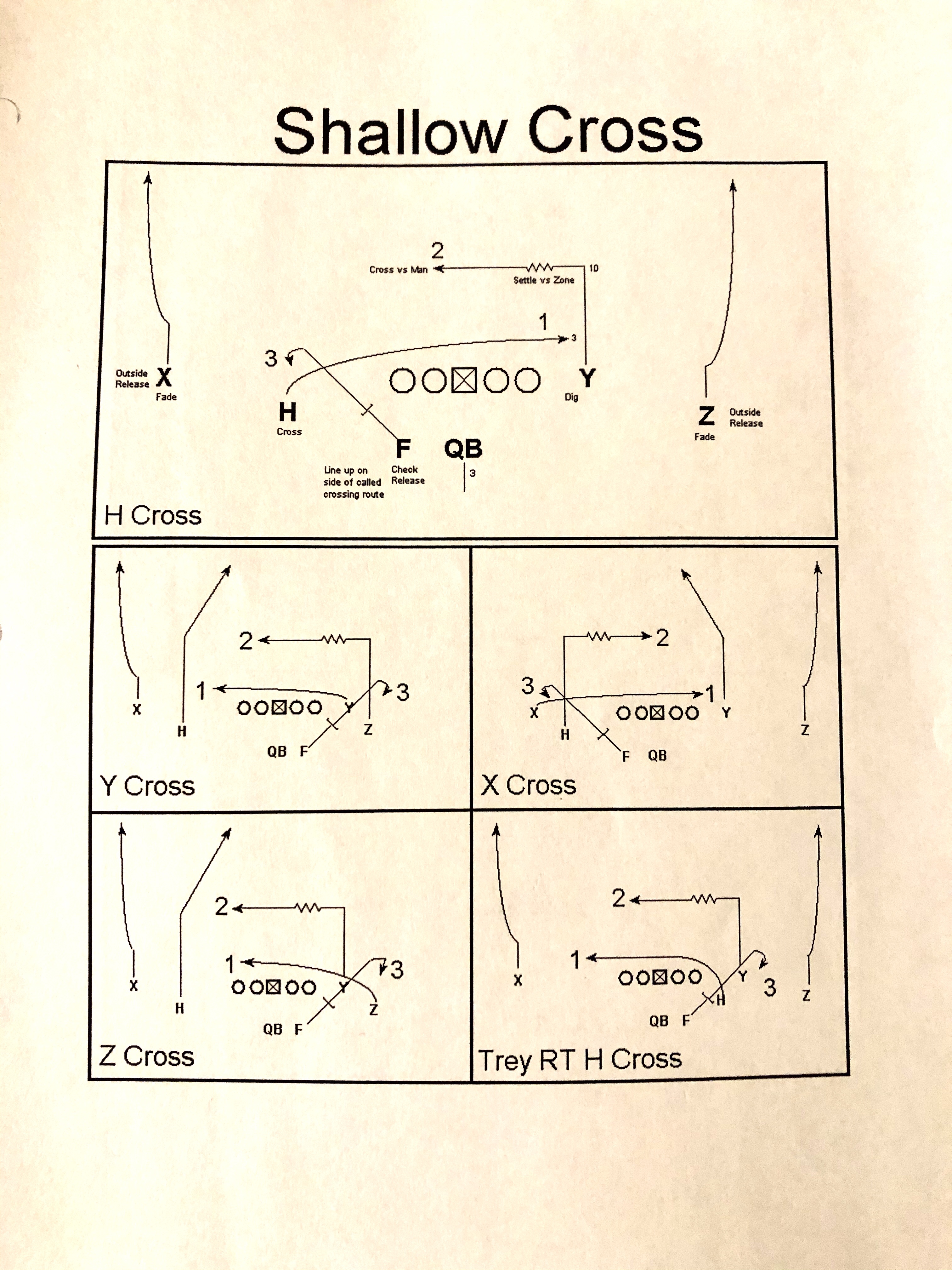 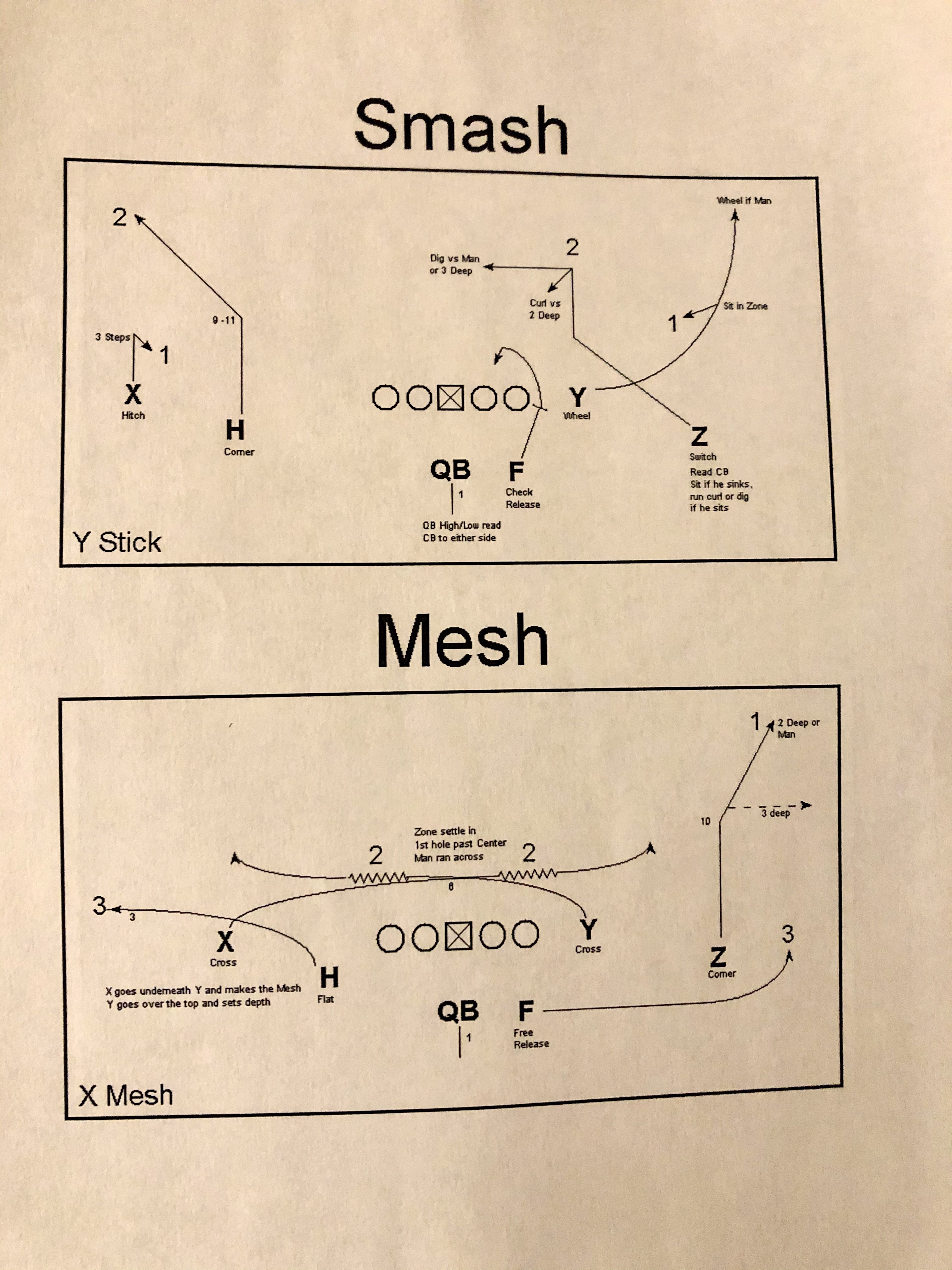 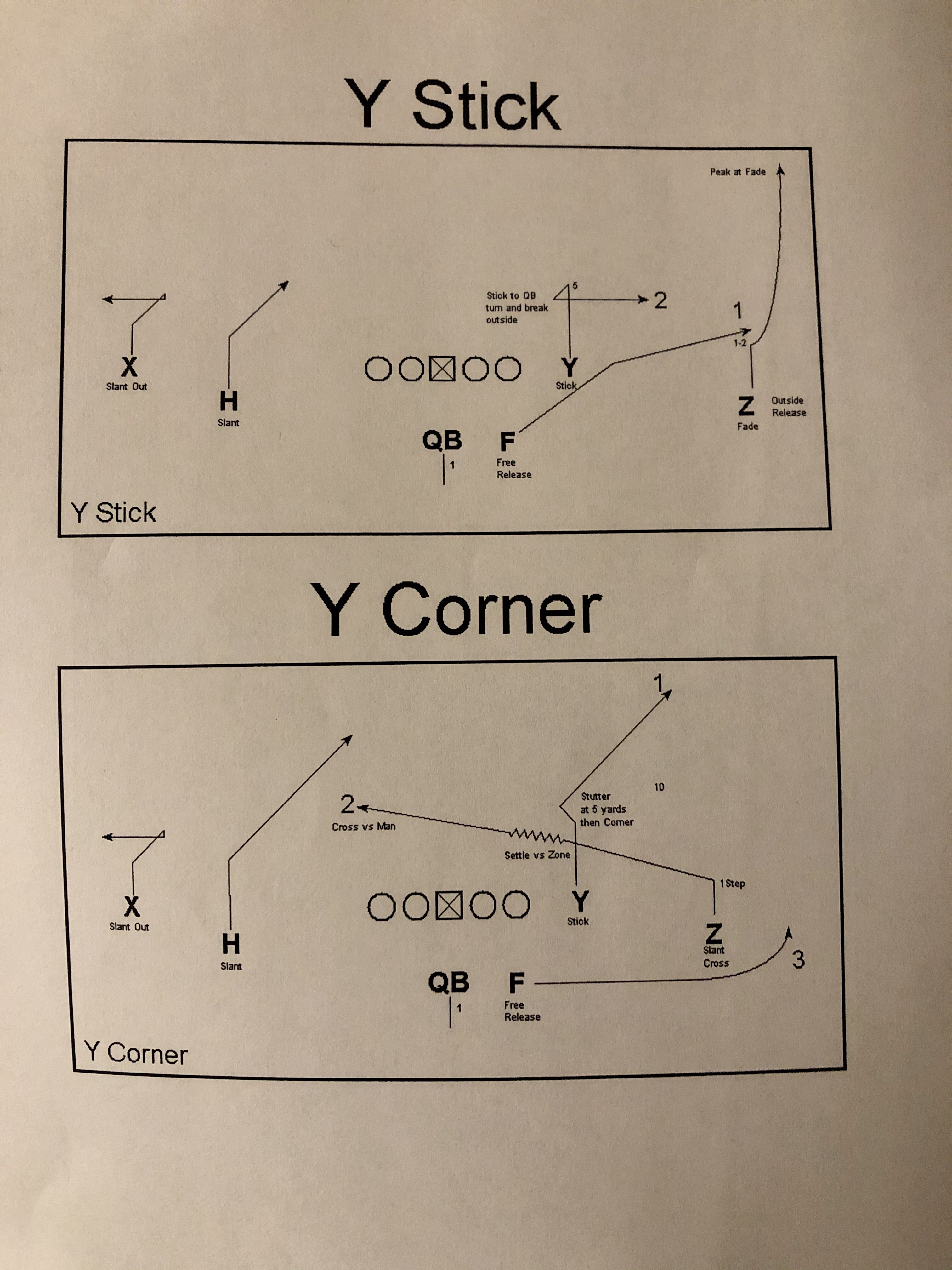 Shallow like Smash, flanker drive and jet all go is a staple West Coast concept. Mumme and Leach however have taken it to the next level with all of these variations of it.

The beauty of the Air Raid however is that other concepts have emerged that make it such a lethal passing attack.

Mesh of course is now the bread and butter concept of the offense. It is the number one pass concept in the system and Leach has devised so different variations off of it. The effectiveness of the concept as whole truly defines this system and why it is so potent. 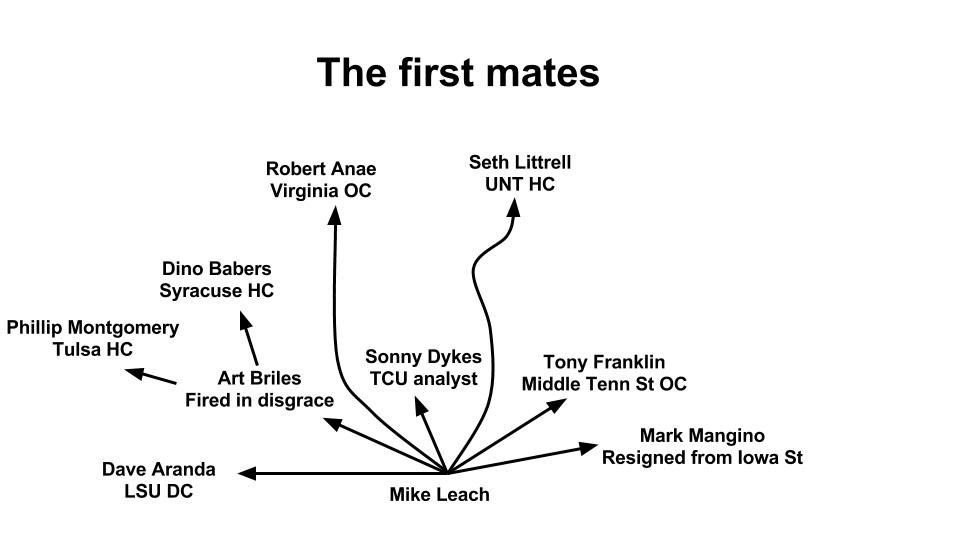 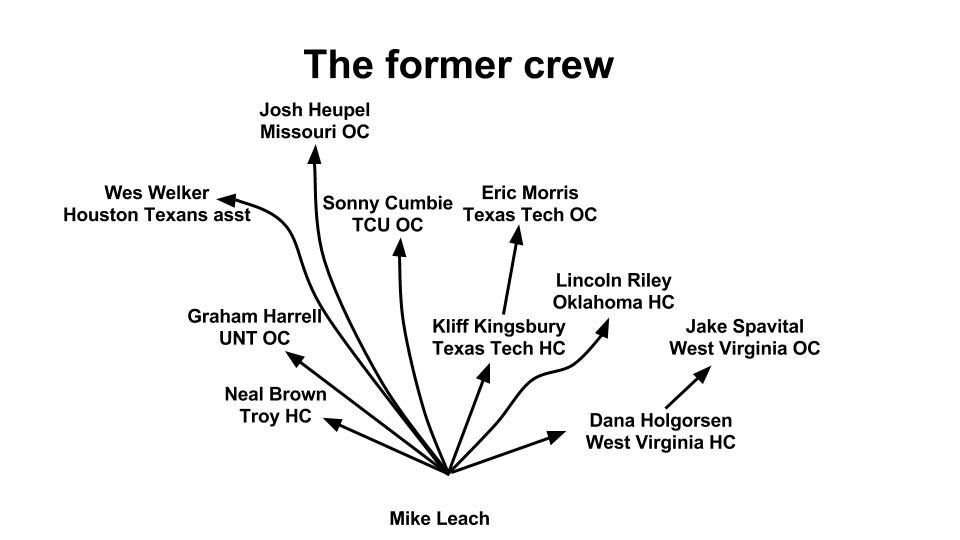 Mumme and Leach have an extensive coaching tree. Here is an illustration of the players turned coaches and assistant coaches who have come out of the Air Raid.

Holgersen and Riley for example both played for Mumme and Leach. Holgersen at Iowa Wesleyan and Riley at Texas Tech. Both went on to coach in the system and both evolved the system into more of a multiple, balanced system.

Mumme, Leach and Kingsbury on the other hand have stayed true to the origins of the system. Sure, Kingsbury has tweaked it by adding more two back and the quarterback run element with Kyler Murray but for the most part, the concepts and play calling approach are the same.

Either way you look at it, all of these coaches have had success with the Air Raid and built their careers on it.

When I think of the Air Raid, I think of it as a system which has changed the landscape of college football. Like the Spread Offense, it has taken over at the college level and it is starting to become more prominent in the NFL. It is this generation’s Run and Shoot and unlike the Run and Shoot, it is not going anywhere. It is here to stay.