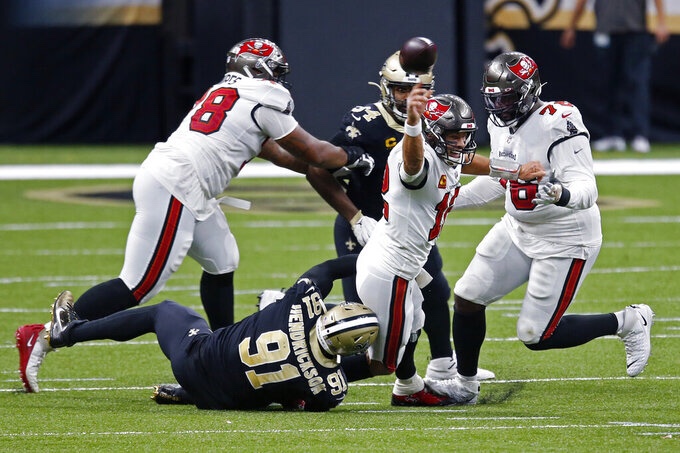 If you still miss Tom Brady, you’ve come to the right place.

Throughout this season we’ll be keeping tabs on what Brady and the Bucs are doing every “TB12 Tampa Tuesday” and if you’ve got a better name please send it our way, it definitely needs work. For those that say ‘he’s not here anymore move on’, he was the greatest athlete in the history of this area and possibly North American professional sports, the continued attention is well deserved.

Sunday’s opener in New Orleans was a worst-case scenario day for Brady. Not only did his offensive line almost get him killed, his team looked like a college program with countless mistakes while his former teammates in Foxborough were winning on the back and legs of Cam Newton.

Brady left New England because his coach wouldn’t openly praise him. His new coach quickly ripped him to the media following the loss and backed it up again on Monday. It’s a safe bet that during the Bucs’ travels home on Sunday night Brady was crushing TB12 products and muttering “serenity now” to himself over and over again.

“”He looked like Tom Brady in practice all the time, so it’s kind of unusual to see that in the ballgame because they didn’t do the things that we didn’t get ready for,” Bruce Arians said Monday. He was far more critical Sunday before choosing to blame receivers during Monday’s media availability, but it still can’t be what Brady wanted to hear after 20 years under a dictator.

“Everything they did, we thought we were ready for,” Arians added. “Some wide receivers have to do a better job of winning one-on-one when he decides to go their way. (Brady) put us in the right run checks a couple of times, so it was a learning experience that way.”

What’s puzzling is how good the Tampa offense looked on its opening drive. Brady dropped a dime into Chris Godwin down the right sideline and eventually scored on a two-yard run, spiking the ball with the enthusiasm of a rookie and not a 20-year veteran.

“Can’t say that we were out of sync because we started out as good as you could start out going right down the field,” said Arians. “Then, we don’t get any more chunk plays other than pass interference penalties. I think it’s a great learning experience. It’s just Round 1 of a 16-round fight and we’ll learn from it.”

Losing of course didn’t happen often in Brady’s Patriots career, but when it did, it almost never looked as ugly as Sunday’s loss did. The Bucs committed dumb penalties, had trouble lining up, and had far too many miscommunications with Brady, especially after we saw so many videos of them working out during the offseason.

Arians questioned Brady’s will-to-win on Monday, stunningly something we thought we’d never hear about the GOAT.

“He’s had it before – he knows how to bounce back,” he said of TB12’s demeanor. “He knew he didn’t play very well and it’s not what he expects from himself, nor what we expect. I would anticipate him to have a little more grit [and] a little more determination this week.”

When asked about his criticism of the first-ballot Hall of Famer following the loss Sunday, Arians doubled down.

“It speaks for itself,” he said. “If you throw an out route and you don’t throw it low and outside – that hasn’t been the case up until that one. [He] was a little bit late on it and it probably [would have been] a better decision to go somewhere else with the ball.”

Bill always gave us a “we all have to do better” when asked about particular mistakes in a game, does anyone ever recall him actually ripping an individual player in his postgame press conferences?

It was all fun and games for Brady up until Week 1. Now, the entire world is already watching with bated breath to see if the winds will come out of the Tampa ship early, or if TB12 can raise the flag and claim the league as his still.