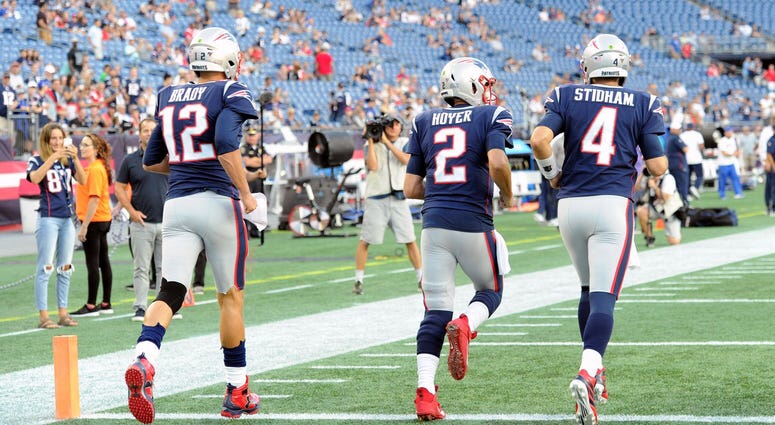 For the first time since what feels like March, we’ve had a bit of a dead period this past week in terms of football news.

As both college football and the NFL continue to try and navigate the pandemic and get athletes back into buildings to safely begin working out with teammates, here’s a few random thoughts on the world of football as we head into June:

So, this has become a point of discussion lately, and while I’m completely on team Stidham, I guess I can see the logic behind starting Hoyer.

Does Hoyer have more experience? Yes. Should that matter? No, but it may. With the Pats schedule shaping up as one of the toughest in the league I could easily see Bill Belichick using Hoyer as his test dummy of sorts and easing Stidham in maybe half way through the year. While I disagree and think now is as good a time as ever to throw Stidham into the fire and see what he has, Bill is far too close to the all time wins record to just mail in a few games to see what a second-year QB has.

They will never tank for Trevor Lawrence, but starting Stidham and having him get hammered early may set you on that path. If you start Hoyer and suck, then you can at least go to the kid for a spark, and you don’t completely kill his confidence by getting his brains beat in early. It’ll be interesting to see how things play out in training camp.

What does the return to athletic facilities mean for Boston College?

The state of Massachusetts has been lagging behind in terms of opening things up, but as the NCAA begins to allow student athletes to return to their facilities soon, that day will eventually be a huge one for the BC football program.

Despite Zoom calls with the media proclaiming just how impressed the coaching staff has been with how the players have adapted, nothing is going to replace that in-person ability to coach someone or just talk to them about how their every day life is going.

The Eagles last met in person back in March, and assuming they’re able to get back in the next few weeks, then we may be looking at a much more “normal” season than we may have originally anticipated.

Crowds are going to be very interesting this season, as it seems some universities are hell bent on having fans there while others are not. For a new team with a new staff and new systems, the lack of crowd noise on the road in some tough ACC stadiums may be a blessing, while home games against teams like Clemson may be far more difficult without the full fledged Heights atmosphere at full throttle.

No matter what happens with the crowds, the fact that BC seems to be closer than they were weeks ago to returning to campus is huge for coach Hafley and his staff. The remote teaching and learning and implementing of a culture is one thing, but no one can replace that pre-season get-to-know-you factor that plays into program building.

Is it worth having fans in NFL stadiums this year if they’re not full?

Let’s say NFL stadiums can be 25% or 50% full for games this season, who decides who gets to go in? Is it season ticket holders only? Even if that’s the case, are you really going to make all of them happy?

What if season ticket holders don’t feel comfortable going, do they lose their tickets? Probably not, but then who’s next in line to fill the stadium? What if just friends and family of players get to go, what kind of atmosphere is that really providing?

At this point – and let me be clear, if stadiums opened tomorrow I would go back in – it just isn’t worth only allowing a fraction of a stadium to be full. People need to realize that things aren’t normal, and therefore the NFL season isn’t going to be normal. If the players are able to focus and do their jobs in front of little to no fans, then what’s the big deal as long as we have something to watch on Sunday’s?

People are going to want to tailgate and live their normal lives when September rolls around and it’s still 70 degrees for the Week 1 kick offs. If you start saying season ticket holders only, or people that win a lottery type of ticket system, or whatever the hell the plan may be, if you’re saying only certain people can go to games but others can’t you’re just going to have PR nightmares on your hands that are easily avoidable.

There needs to be a universal decision made by the NFL so it’s not left up to greedy owners on an individual case basis. Let’s just play with either all the fans or no fans this year, appreciate that we have actual games to watch and come back ready to drink more and tailgate longer than we ever have in 2021.